Exclusive: To Catch An Earl by Kate Bateman Excerpt 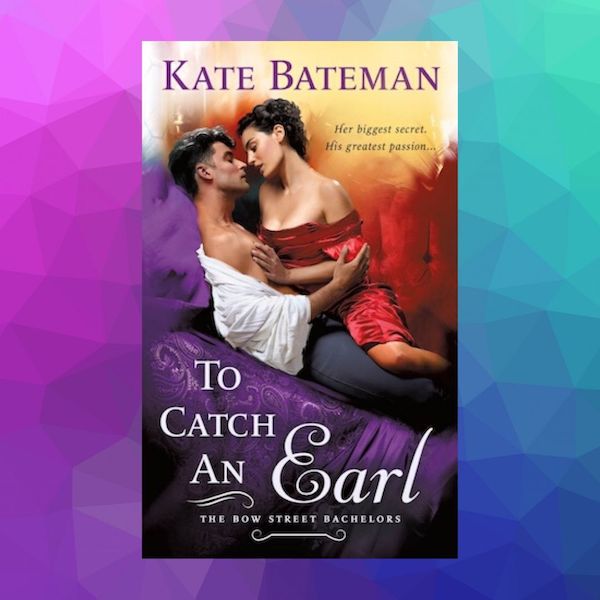 This is such a delicious excerpt. Tell me, you read it, and then didn’t feel impelled to instantly buy (or borrow) the book!

About To Catch An Earl:

Alex Harland, Earl of Melton and dedicated rake, never pictured himself as an agent of inquiry. But the thrill of investigation is a challenge he now embraces. When he’s asked to pursue the Nightjar, a notorious thief who is reclaiming France’s crown jewels, the case throws him into the path of the beautiful and equally elusive Emmy Danvers, reminding him of the only puzzle he’s never solved: the identity of the mysterious woman who once stole a kiss from him — and left him wanting so much more.

The daughter of a thief, Emmy learned long ago how to safeguard her secrets — and, as the notorious Nightjar, her love for Alex Harland is one of them. With the determined earl hot on her tail — and making her hot under the collar — Emmy has no choice but to keep her distance. But when a moment’s danger threatens Emmy’s life as well as her name, will Alex finally discover that he’s followed every clue…to true love?

“The diamond is upstairs,” Camille murmured as she and Emmy strolled through the British Museum’s Greek and Roman sculpture gallery. Their skirts swished softly in unison against the polished parquet floor. Emmy counted the number of steps it took to reach the staircase; twenty-eight.

They paused to admire a marble depiction of a gladiator and she tried to imagine the athletic figure dressed in clothes. It would be impossible to fit shoulders that muscled into the confines of a modern tailcoat. And what cravat would wind around a neck so thick? For one brief, startling moment she wondered what Alexander Harland might look like without his clothes on, and her entire body begin to glow. Would he look like this? Both hard and smooth? All ripples and curves?

Emmy swirled around in horror. Sure enough, the subject of her feverish imaginings was standing at the far end of the gallery.

She ducked behind the statue and closed her eyes. It was as if her outrageous fantasies had actually summoned him into existence, like some terrible, far-too-handsome genie! She tried to will him away, but when she braved a peek from around the gladiator’s thigh, there he remained; stubbornly, attractively present.

The one small mercy was that he hadn’t noticed them—he seemed to be inspecting a frieze of wall-mounted panels. They could still escape.

Since they were at a safe distance, Emmy allowed herself a moment to study Harland’s physical architecture in the same way she might study the floorplan of a heist; taking in every pertinent detail. Certainly, he was built along monumental lines. Tailoring couldn’t disguise the bulk of muscle in his bicep, nor the breadth of his shoulders. His breeches conformed so faithfully to his thighs that she could actually see the ripple of muscles beneath. And the tails of his coat were undoubtedly hiding a remarkable posterior—

“We really should go and introduce ourselves,” Camille trilled.

Emmy clutched her arm. “Are you mad?  Why would we want to do that? I thought we’d agreed to avoid his notice?”

“Oh, pish. He’ll turn around and see us at any moment. It will be far more noticeable if we don’t acknowledge him. We must be brazen. Confident. And besides, I knew his mother. I’m sure he’s a lovely man.”

“He is the enemy,” Emmy hissed as if she were the wicked stepmother in a badly-acted play.

“He works for Bow Street! He is THE LAW.”

Camille waved her hand in a dismissive gesture.

“And he is not a ‘nice man,’” Emmy said. “He is a rake and a gamester. He might be an Earl, but he is thoroughly disreputable. He owns a gaming club. In St James’s.”

“And where else would one open a gaming club?” Camille asked tartly. “Blackheath? Limehouse? Is he rich?”

Emmy narrowed her eyes. “Well, yes, by all accounts. Not that it makes—”

“There you go then,” Camille smiled. “Handsome, rich, and charming. The perfect trifecta.”

She began to sidle forward, using the sculpture of a recumbent Apollo as cover. Emmy tried unsuccessfully to pull her back.

Alex was not impressed by Lord Elgin’s marbles. They seemed to consist of an endless procession of headless riders dressed in little more than bath sheets trying to control overly-frisky mounts. If the Greeks wanted them back — and he wasn’t sure why they would — they were welcome to them.

He was about to return to the Tricorn when his nose detected the same scent he’d experienced outside Rundell and Bridge. His heart began to pound against his rib cage and for one moment he experienced an almost overwhelming surge of happiness. Fate was giving him a second chance!

She must be remarkably close to him. It had been months since anyone had managed to sneak up on him without attracting his attention; he was usually far more conscious of people coming at him from his blind side. The marble sculptures must have concealed her approach.

He was almost afraid to turn around. ‘Never meet your heroes,’ the old adage said, and the same was doubtless true for mysterious dance partners. No real-life flesh-and-blood woman could hope to compete with three years of dedicated fantasizing. She was bound to be a disappointment. Married. Or plain. Or cross-eyed.

Still, he had to know.

Bracing himself as if for a blow, he turned and encountered a froth of mid-brown hair done up in an elaborate feminine style. He readjusted his gaze downward — the owner of the hair was a good foot shorter than himself — and found himself looking into a pair of wide grey eyes set in a pale, elfin face.

An instant’s confusion, then bitter disillusionment, crashed over him. A ball of indignant outrage incinerated every last ounce of optimism in his soul.

He’d always suspected fate was a perverse bitch, but even he couldn’t have predicted this cruel twist. Of course, his mystery woman would be the prime suspect in a series of impossible crimes. And of course, she would be beautiful, in that subtle, understated way that had always appealed to him most.

Alex bit back a cynical laugh and narrowed his eyes. It made an awful kind of sense. How much energy had he wasted, dreaming of her? He should have known she was too good to be true.

This close, he could see details he hadn’t noticed at Lady Turnbull’s. Her eyes were grey, with pale, silvery flecks. Her nose was small and tilt-tipped; the word ‘impertinent’ sprang to mind, and the bridge of it was unmistakably freckled. She had a beauty spot half an inch below her left eye.

Alex let his gaze drop lower and almost groaned. Her lips were exactly as he remembered. Those lips had laughed at him from beneath a Venetian mask. Those lips had pressed against his in innocent ardor and left him panting for more.

Those lips were utter, pink perfection.

Alex blinked. A throaty female voice to his right interrupted his self-flagellation.

“Good morning! I am Camille Danvers, Comtesse de Rougemont. It is a pleasure to make your acquaintance. I knew your mother, years ago. Such a charming lady. I still miss her terribly.”

Remembering his manners, Alex lifted the older lady’s hand to his lips. “A pleasure, madam. And thank you, but I barely remember her. She died when I was but six years old.”

The countess gave him a studied appraisal. “She was a handsome woman, and I must say you’ve certainly inherited her good looks.” She gestured to the tiny traitor beside her. “Allow me to introduce my granddaughter, Emmeline.”

Alex took the hand that was offered, amazed at how small it seemed within his own. They were both wearing gloves, but the shock of the contact still sent a sizzle of something — anger, definitely anger — all the way down to his toes.

He brought her hand up to his lips and at the last moment, seized by a wicked impulse, twisted it and pressed his mouth to the inch of exposed wrist between glove and sleeve.

The scent of her robbed him of breath, and he took a perverse satisfaction in her shocked gasp as his lips touched the bare skin over her fluttering pulse.

“It is a pleasure to meet you, Miss Danvers,” he growled.

From TO CATCH AN EARL by Kate Bateman. Copyright © 2020 by the author and reprinted by permission of St. Martin’s Publishing Group. 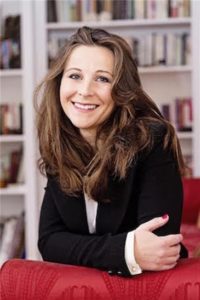 Kate Bateman, (also writing as K. C. Bateman), is the #1 bestselling author of historical romances, including her RITA-nominated Renaissance romp, The Devil To Pay, and the novels in the Secrets & Spies series: To Steal a Heart, A Raven’s Heart, and A Counterfeit Heart. When not writing novels that feature feisty, intelligent heroines and sexy, snarky heroes you want to both strangle and kiss, Kate works as a fine art appraiser and on-screen antiques expert for several popular TV shows in the UK. She splits her time between Illinois and her native England. Follow her on Twitter to learn more.

Where to Find Kate:

Keira Soleore writes for the International Examiner and Cogitations & Meditations. She enjoys connecting with readers on Twitter (@keirasoleore) and through her website (www.keirasoleore.com). Her interests include medieval manuscripts, philosophy, poetry, picture books, choir, sunshine and beaches. Keira is a pseudonym.
All Posts
PrevPreviousHard to Get has Got to Go by Deb Caletti
NextThe Brotherhood of Deep OpsNext