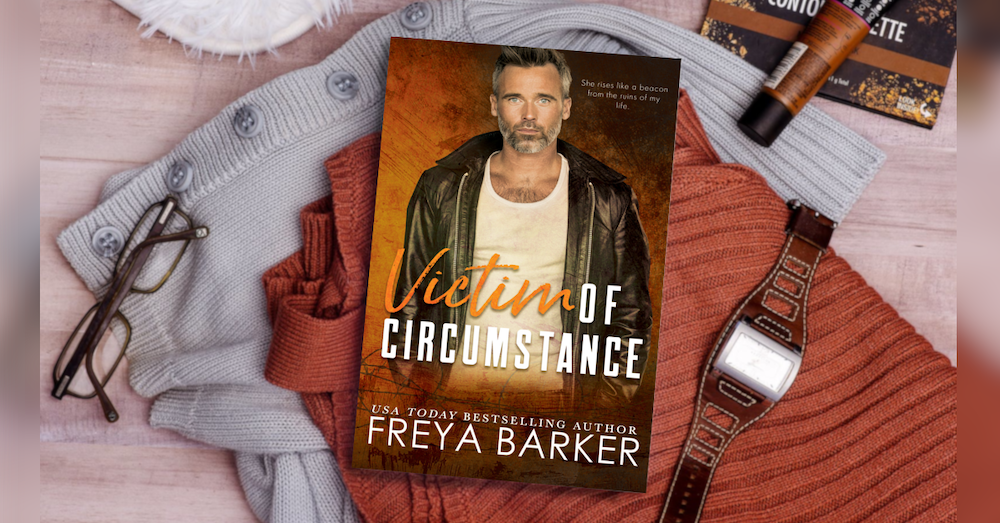 Freya Barker’s next book, Victim of Circumstance releases on June 2. Barker is known for writing mature, seasoned characters that have tons of baggage from lives well, and sometimes hard lived. Second chances happen for more things just just love and romance, although make no mistake, this book is full of love and romance! In this stand alone tale, Gray Bennet spent two decades locked away in a dark, dank cell. He isn’t used to the sun, the sounds or the scents of the outside world. He’s a bit overwhelmed. Robin Bishop is a beacon offering to guide him into the light.

I sit frozen as the man approaches.

Those blue eyes. The same white shirt and leather jacket.

“You were at the 9/11 Memorial, weren’t you?” I probe when he drags the chains to the front of my SUV.

He totally ignores my question and it’s clear he wants me out of the way. Fine. Glad to know he’s really an asshole so I can stop fantasizing about him.

It still freaks me out to bump into the same man I ran into in New York, a few weeks ago, at the side of a dark road in nowhere Michigan.

I resist the urge to call him out on it, step over the chains he’s attaching somewhere under the bumper of my vehicle, and because it’s getting chilly out, climb inside the warm cab of his truck.

Minutes later, his door opens and he gets in behind the wheel.

“That was me. In New York,” he says, his rough voice so low it’s almost a whisper.

“I know,” I answer, matching his volume. “This is weird.”

“Sure as fuck is.” His raw chuckle is a surprise, as are the dimples popping up by the corners of his mouth, but the next moment his face irons out again. “Where to?”

I can’t count the times I cautioned my daughter about sharing information like her phone number or our address with strangers, and here I am, contemplating doing just that.

“How do you know Kim?” I ask, trying for a little more assurance that he’s on the up and up.

“We were in high school together. She was a couple of years behind me.”

“You grew up here? I’ve never seen you around and I’ve been here now for almost seventeen years.”

A muscle ticks in his jaw as his eyes stare out the front window.

“I just recently moved back to town,” he says brusquely.

“And you work at Tank’s shop?”

He turns his head and I meet his eyes, amazed again at how light they are.

“Okay,” I concede, giving him my address.

I watch his hands on the steering wheel as he pulls onto the road. You can tell a lot from a person’s hands. Gray’s are large, with a wide palm and long fingers. The remains of a hard day of manual labor not quite gone from around the blunt nail beds. Callused hands I imagine would feel rough to the touch. Slightly abrasive on skin.

My face flushes at the direction my thoughts travel and I abruptly turn my focus on the road ahead, just in time to see a couple of deer dart out in front of us. He slams on the brakes at the same time his arm shoots out, bracing me in my seat. Much like I used to do with Paige, instinctively protecting what was precious to me.

We sit like that for what feels like much longer than it is. I’m acutely aware of the pressure of his forearm against my chest and forget to breathe.

“You okay? Robin?” He pulls back his arm and I can feel him looking at me.

“I’m good,” I manage to rasp, despite feeling breathless and a little shaky. Although, I’m not sure whether from the near collision or his unexpected touch.

I need to get a grip. It’s clearly been too long since I’ve been in close proximity to a man if I get flustered by this. Even as I’m silently berating myself, I know it’s more than that.

“I saw you, you know. On the plane. I almost stopped to talk to you.” I’m not sure why I’m volunteering the information, other than to fill the silence. He looks startled. “You were looking out the window. I wasn’t sure…I didn’t want to interrupt.”

“I don’t like flying,” he says, surprising me. Not so much he doesn’t like it, but that he would admit it. “Looking out the window helps me forget I’m stuck in a small tin can.”

I smile at that.

“I gather you don’t fly often?”

He glances over at my question and I can almost see shutters coming down.

Silence stretches until he pulls into the long tree-lined driveway to my house. It’s dark except for the porch light I left on when Shirley and I left. Being alone again will be a bit of an adjustment. Despite the not so happy reasons for Shirley’s two-week stay, I enjoyed having company.

“Your drive is too dark. You’re out here alone, you need to be more careful.”

I’m annoyed at his gruff, patronizing tone, while at the same time wondering if perhaps I should be worried instead.

“I’m five minutes out of town,” I protest.

“By car. Which at this moment is hanging off the back of my truck.” He stops in front of my house, peering out the front window. “A lot longer if you have to walk it.”

Driven to make her books about ‘real’ people; she creates characters who are perhaps less than perfect, each struggling to find their own slice of happy, but just as deserving of romance, thrills and chills in their lives.

Recipient of the ReadFREE.ly 2019 Best Book We’ve Read All Year Award for “Covering Ollie, the 2015 RomCon “Reader’s Choice” Award for Best First Book, “Slim To None”, and Finalist for the 2017 Kindle Book Award with “From Dust”, Freya continues to add to her rapidly growing collection of published novels as she spins story after story with an endless supply of bruised and dented characters, vying for attention!

1 thought on “Exclusive: Victim of Circumstance by Freya Barker Excerpt”

Donna Soluri started in the book world as Scandalicious; now, this almost empty nester is going her own way. A lover of cupcakes, champagne, old-school rap, and Harry Styles she likes to read books with characters closer to her age still romancing and kissing and causing trouble.
All Posts
PrevPreviousA Bookstagram Education: Lessons Learned from 3 Years on the Platform
NextDaily Frolic: The Best Cold Brew MakerNext