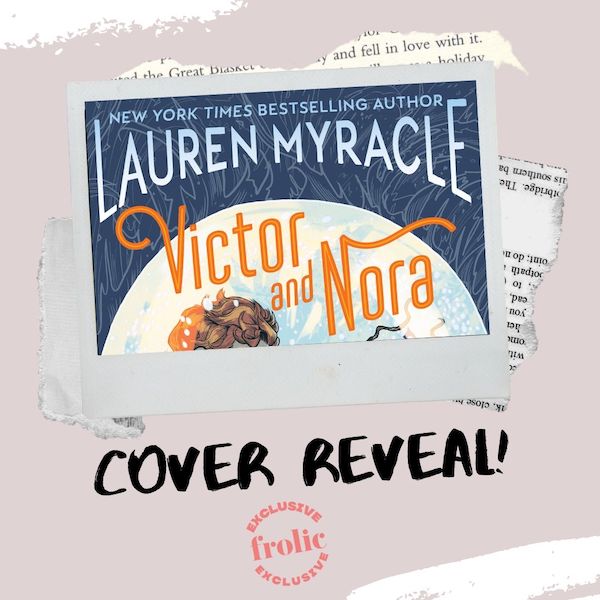 We are so excited to share with you the amazing cover and exclusive excerpt of Victor and Nora: A Gotham Love Story by Lauren Myracle and Isaac Goodhart, out November 3rd, 2020! 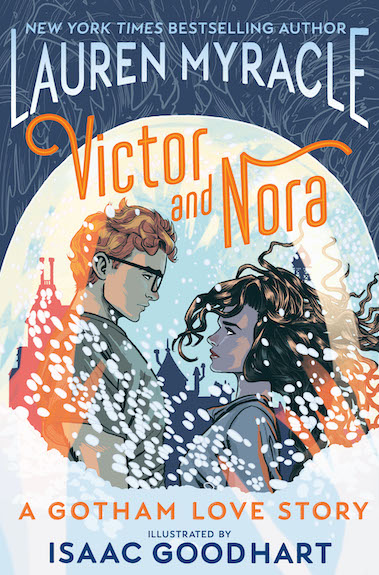 #1 New York Times bestselling author Lauren Myracle (Let It Snow, ttyl, ttfn) and artist Isaac Goodhart (Under the Moon: A Catwoman Tale) reunite in this gorgeous YA story about living life to the fullest, and how far one will go for love.

Seventeen-year-old Victor Fries has a cold heart. After his brother died in a tragic house fire that Victor feels responsible for, his parents have isolated themselves, and Victor has dedicated his whole life to one thing: science.

Nora Kumar is full of life. She is suffering from an incurable illness that will slowly consume her, so she’s decided to live her last days to the fullest at her summer home in Gotham City until her birthday, the day she plans to take her own life.

When Victor and Nora meet one day at the cemetery outside of town, they are astonished to find the connection they’ve been missing in their lives. Their summer quickly spirals into a beautiful romance, and Victor’s cold heart is able to thaw, allowing him to begin to enjoy life just a little more. But when Victor learns of Nora’s illness, he’s driven to try to find a solution to keep from losing another person he loves…by whatever means he can.

Victor and Nora: A Gotham Love Story is a tragic tale about living life to the fullest and what it truly means to love…and to let go. 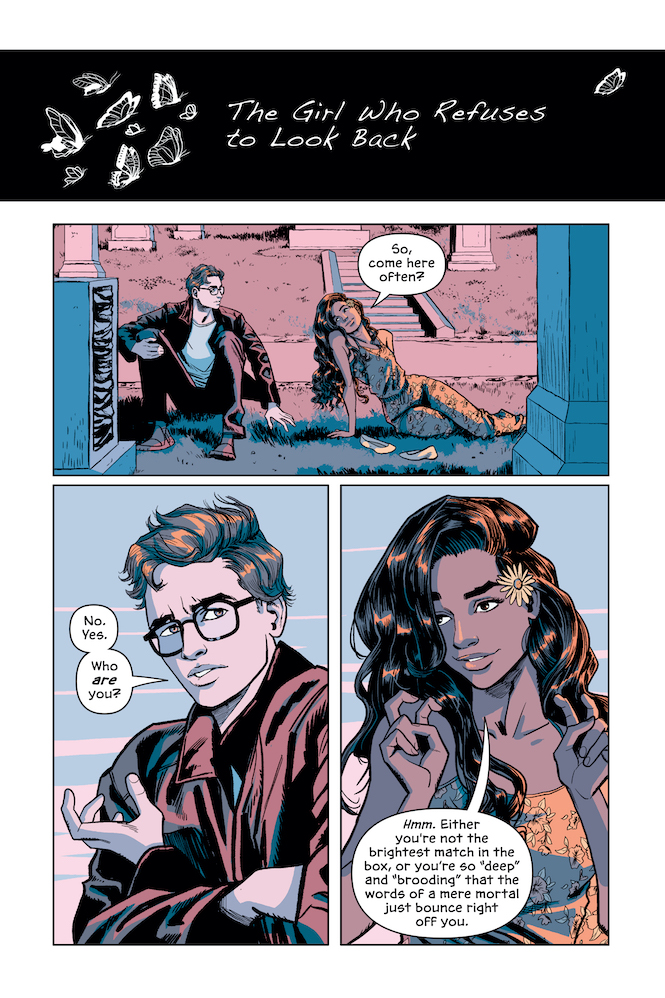 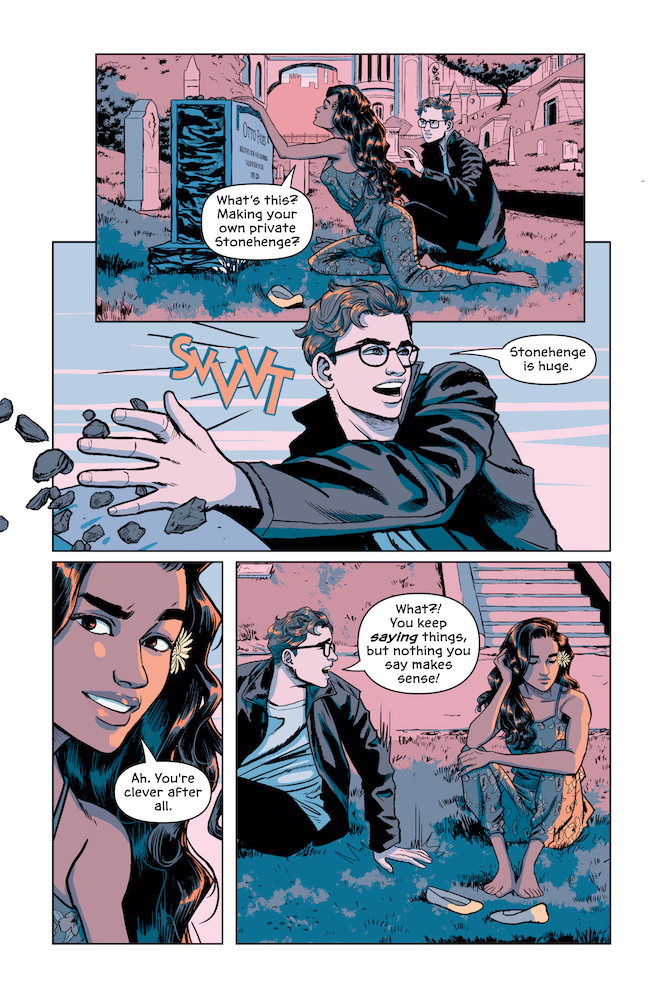 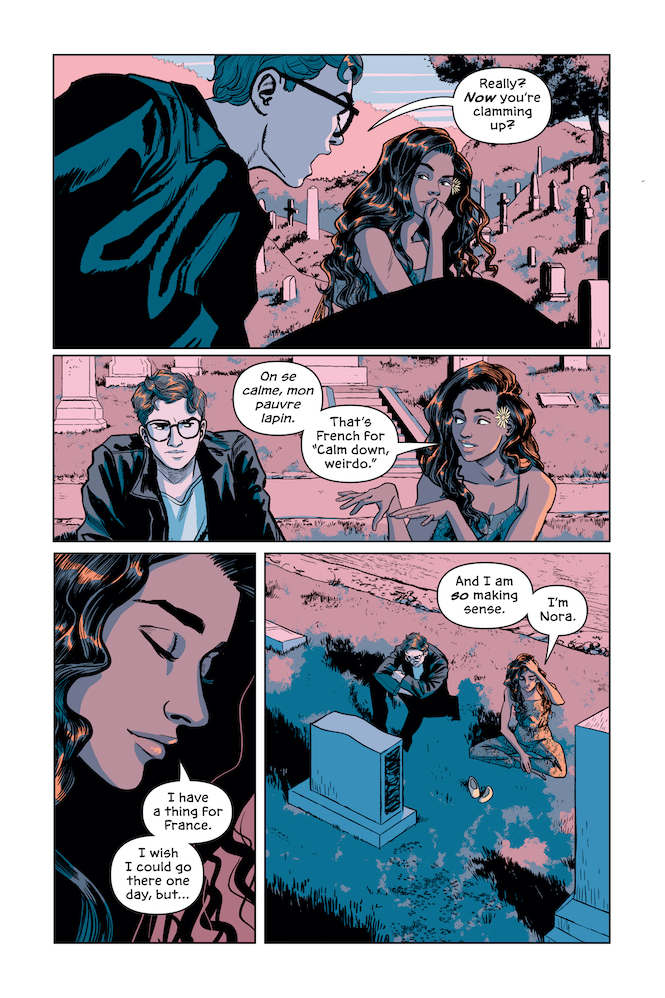 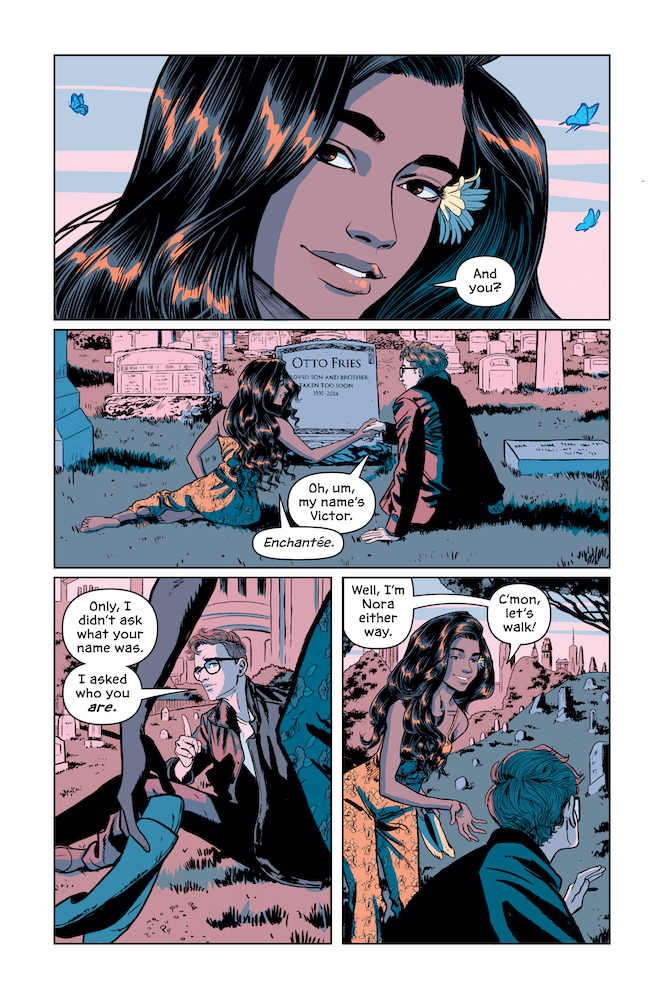 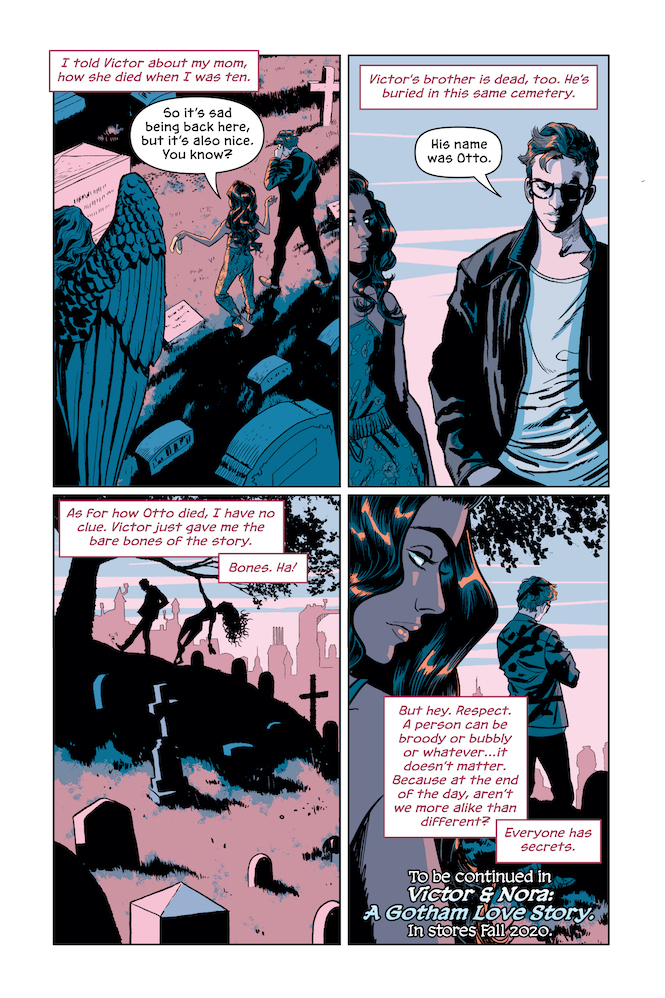 What drew you to the project/characters and what are you most excited about?

LM: “It was all Isaac’s idea! He’s the comic guru out of the pair of us, and thank goodness for his passion, because the depth of his knowledge about all things comics and all things DC is a driving force. We both knew we wanted to work together again if DC would have us, and he threw out the idea of telling the story of a young Mr. Freeze. After a little research of my own, I realized that sure, Victor Fries is a compelling character, but Nora, his girlfriend, is equally compelling. And boom, I was in.”

IG: Mr. Freeze is my favorite rogues gallery villain! Always has been! Batman: The Animated Series introduced me to Victor Fries when I was a little kid and as I grew older, I came to understand and appreciate him as a tragic character. The cool thing about our story is that we get to explore these characters from a different angle and see them when they first meet. We get to show Victor and Nora falling in love and understand what makes their relationship so strong. The thing I was most excited about was the chance to give Nora equal billing. The story is told through alternating perspectives, so we get to know Nora and her goals and motivations as much as we do Victor’s.

LM: “As always, my primary goal was to tell a great story–and as it’s a graphic novel, to tell it in a visual way that would let Isaac’s genius shine. After that, it was to dismantle the storyline of Nora as “the sexy lamp.” If you can take out a female character and replace her with a sexy lamp, as comic book writer Kelly Sue DeConnick argued, then you’re doing that character (and women as a whole) a huge disservice. Well, she put it a bit more colorfully, but I thought it was high time for Nora to have a storyline of her own that didn’t simply put her in the story as a plot device to show Victor’s character growth.”

IG: My vision for the art was to introduce more visual vocabulary than I ever have before! One of the (many) great things about Lauren’s writing is that she balances so many different tones throughout her works. There are scenes in Victor and Nora that are sweet and adorable. There are also scenes that are intensely uncomfortable and tragic. As an artist who wants to complement that, I tried to incorporate different tones visually. The dark scenes literally look darker with heavy, oppressive shadows. The romantic scenes are bright with open lines. We even have several fantasy scenes all drawn in a different style to help convey how our characters feel.

What’s it like working with each other on this project? Isaac what did you like most about Lauren’s script? Lauren, what do you love about Isaac’s artwork in this story?

LM: “I love everythiiiiiiiing about Isaac’s art! Working with him is an absolute and exhilarating joy, no lie. He’s brilliant, and he brings such depth and texture to the story with his illustrations, adding meaning that the script on its own just wouldn’t have. I feel extremely lucky, as if I’m working with the next Will Eisner and any minute now, he’ll be too good for the likes of me. 😉 Heck, he already is!”

IG: I love working with Lauren! She’s exactly the type of writer and collaborator I always hoped to work with when I was a kid wanting to break into comics! The best thing about her script is that she simultaneously wrote exactly the kinds of scenes I like to draw while ALSO challenging me to push myself outside my comfort zone! I never thought I’d be the type artist who experiments with different media or would draw twenty different angles of an intricate bridge. I am now! And I really appreciate every challenge thrown my way.

Because this is our second graphic novel together, we know a lot about each other in terms of what we like and how we tell a story. That made Victor and Nora a true pleasure to work on. It really felt like Lauren was writing to my strengths and was pulling out my best work.

What do you hope readers take away?

LM: “I hope readers take away a deeper understanding that no one exists for the sake of having a walk-on role in anybody’s life, whether in fiction or reality. And a reminder, through the vehicle of a beautiful love story, that although life is fragile, it sure is frickin glorious.”

IG: “I hope readers take away that there are complicated problems in life that don’t always have easy answers. It helps to understand a situation from another person’s point of view.”

About the Lauren & Isaac:

Lauren Myracle is the bestselling author of many books for children and young adults, including the acclaimed Internet Girls books ttyl, ttfn, and l8r, g8r. ttyl and ttfn are New York Times bestsellers, and ttyl was the first book to be written entirely in instant message. Lauren is also the author of the popular Winnie Years middle grade series. Lauren grew up in Atlanta, Georgia, and earned a BA in English and psychology from the University of North Carolina at Chapel Hill. She later earned an MA in English from Colorado State University, where she taught for two years, and an MFA in writing for children and young adults from Vermont College.

Isaac Goodhart is a 2010 graduate of the School of Visual Arts with a BFA in cartooning. He got his start in comics in 2014 as one of the winners of the Top Cow Talent Hunt. After drawing Artifacts #38, he moved on to illustrating Matt Hawkins’ Postal for twenty-six consecutive issues. He recently illustrated Under the Moon: A Catwoman Tale, written by Lauren Myracle and published by DC Comics.

Where Romance and Pop Culture Live Happily Ever After.
All Posts
PrevPreviousDaily Frolic: This Interview with Lauren and Cameron from Love is Blind will Melt Your Heart
NextComics and Chatter: Interview with “Green Lantern: Legacy” Writer Minh LeNext