Exclusive: Waiting for a Scot like You by Eva Leigh Excerpt 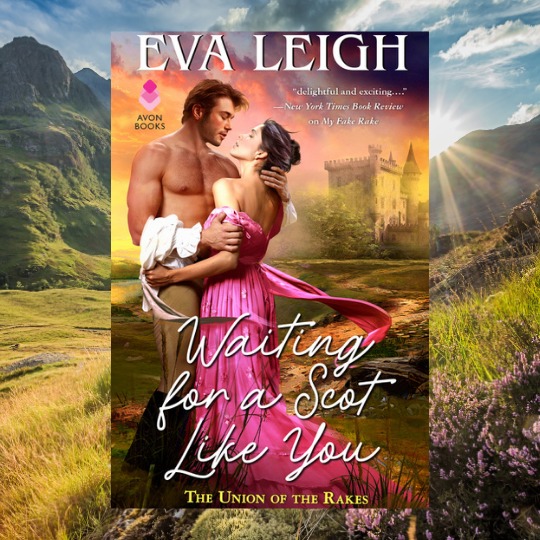 We are so excited to bring you this exclusive excerpt of Waiting for a Scot Like You by Eva Leigh! 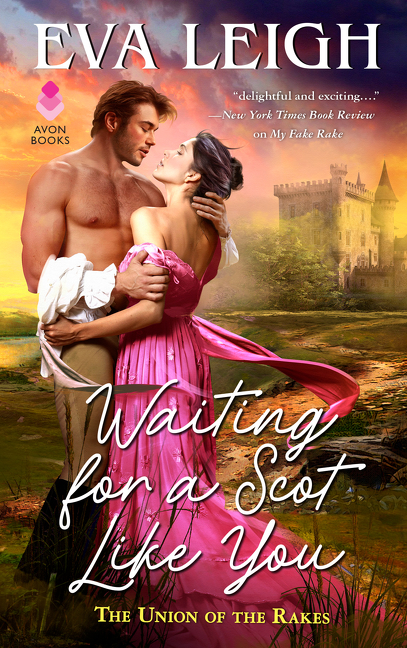 Adjusting to life in peacetime isn’t easy for Major Duncan McCameron. Escorting a lady on her journey north seems like the perfect chance to give him some much-needed purpose. That is, until he learns the woman in question is the beautiful, bold, reckless Lady Farris. She makes his head spin and being alone together will surely end in disaster.

Beatrice, the Dowager Countess of Farris, is finally free of a stifling marriage and she has no plans to shackle herself to any other man. Ready to live life to the fullest, she’s headed to a week-long bacchanal and the journey should be half the fun. Except she’s confined to a carriage with a young, rule-abiding, irritatingly handsome Scottish soldier who wouldn’t know a good time if it landed in his lap. But maybe a madcap escapade will loosen him up…

Between carriage crashes, secret barn dances, robbers, and an inn with only one bed, their initial tension dissolves into a passion that neither expected. But is there a future for an adventure-loving lady and a duty-bound soldier, or will their differences tear them apart?

Beatrice settled on the squabs of the carriage, then edged closer to the window to make room when McCameron helped Jeanie into the vehicle. As much as she didn’t want to, she couldn’t stop herself from watching as the major climbed aboard, catching quick impressions of fabric stretching across taut muscles.

“All secure, Major?” she asked him sunnily once he’d taken his seat opposite her.

His response was again another grunt.

“You’re welcome to close your eyes once we’re underway,” she said with treacly sweetness. “Might as well get some rest, Major McCameron. I hate to disappoint you, but we are going to have a very enjoyable journey.”

With that, she knocked on the roof of the carriage. A moment later, they were underway.

Jeanie nodded off long before the major so much as blinked. In truth, they had barely reached the northern edge of the city before Beatrice’s companion was asleep and very gently snoring.

Without that option, however, Beatrice was left with only Major McCameron for conversation. The landscape itself was not remarkable enough to demand attention, and as she couldn’t read in a moving carriage without feeling ill, there was really nothing to do except attempt to speak to the infuriating man.

“Have you done much travel since the war?” she asked.

She waited a moment, but it gradually became clear he did not intend to elaborate.

Trying again, she asked, “Have you known the duke for long?”

“Are you now determined to answer me in single syllables, Major?”

To this, he didn’t say a word, only tightened his jaw and scowled at her.

“When my children were little,” she said brightly, “and we had to amuse them on long carriage rides, we used to sing a song about what we observed out the window. Would you like to sing that song now?”

She couldn’t resist a triumphant smirk at finally provoking him into speech. But she couldn’t ignore the fact of what he’d just said. “Gracious. Thirty-four. That makes me old enough to be your . . . aunt.”

“This isn’t the Middle Ages, Major McCameron. I did not start having children at the age of twelve.” A thought occurred to her. “Are you married, Major?”

“Do you have any children?”

“That you know of,” she added.

“I’m certain you are.” Unfortunately, this line of inquiry made her consider whether he had lovers, and if so, who they were, and what it was like for them to have him in their beds.

Boring. She was quite certain of that. He’d be mechanical and rote, with nothing resembling actual lovemaking. It would be brief and cursory, and then he’d click his heels together in a military salute before quitting the bedchamber.

“Forgive me, ma’am,” he said on a growl, “but other than the fact that I was a major in His Majesty’s Army and your awareness of my friendship with the Duke of Rotherby, you know nothing about me.”

“That was quite a soliloquy,” she said.

“It won’t happen again.” Seemingly tired of glaring at her, he looked out the window.

“Goodness,” she said and sighed. “You are grumpy.”

She gaped at him. “I did no such thing. I said you were grumpy.”

“Precisely,” he bit out. “Grumphie is a pig’s name—in Scotland.”

“Ah.” She sat back against her seat. “I didn’t know that. I only meant that you were quite cantankerous and sullen.”

He narrowed his eyes. “That isn’t much better ma’am.”

She exhaled. “This has to rank as one of the most frustrating conversations I’ve ever had, and, given that I did raise three children, that’s saying something.”

He did not need to remind her of that. Even though it was still morning, and probably not long after his shave, his reddish beard was already starting to appear on the angles of his jaw and cheeks.

“Was your training strictly in field tactics,” she asked, tilting her head, “or did it extend to the negotiating table?”

He raised one of his eyebrows. “I arbitrated but never surrendered.”

“Did you take prisoners?”

“And denied them bread and water, I’d wager.”

“Oh, no, ma’am.” He leaned forward slightly, bracing his forearms on his thighs. “If someone does what I tell them to do, I treat them very well.”

She couldn’t stop her laugh. “What a positively despotic attitude. What if you’re met with resistance?”

“On what?” She didn’t want to be intrigued, and yet each laconic statement from him pointed to depths she hadn’t anticipated.

“On whether or not they can meet me blow for blow on the battlefield. I respect a worthy opponent.” A corner of his mouth hitched, which did nothing to soften his features. He looked, in fact, like a man eager for combat.

“Prepare yourself, then, Major,” she said, smiling. “Because you have met your match.” She steepled her fingers, tapping them against each other as a throb of something moved her. Something that felt suspiciously like anticipation.

Eva Leigh is a romance author who has always loved the Regency era. She writes novels chock-full of determined women and sexy men. She enjoys baking, spending too much time on the Internet, and listening to music from the ’80s. Eva and her husband live in Central California.

Where Romance and Pop Culture Live Happily Ever After.
All Posts
PrevPrevious5 Reasons to Give Regency Romance a Try if You Love Contemporary Romance
NextExclusive: Christmas on Lover’s Lane by Teri Wilson Chapter FiveNext