Exclusive: We Can’t Keep Meeting Like This by Rachel Lynn Solomon Cover Reveal and Excerpt 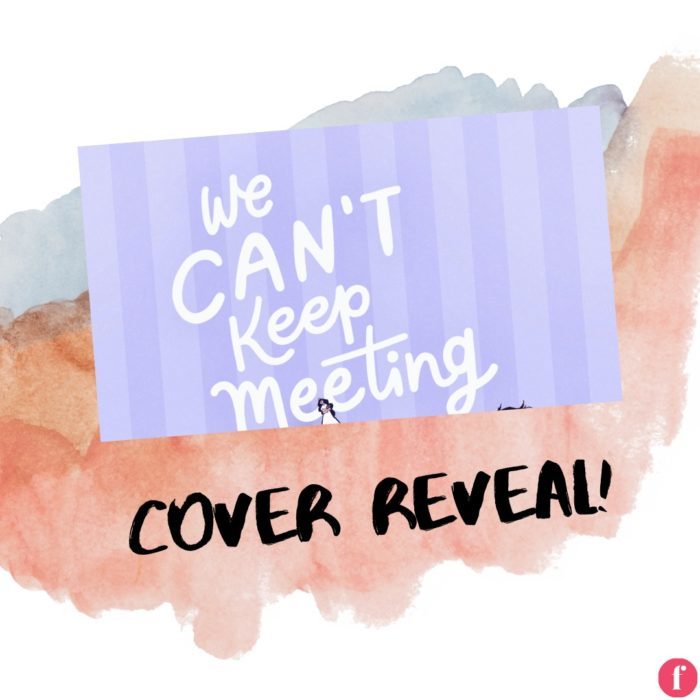 “I love writing in the YA romcom space, and I can’t wait for readers to meet Quinn and Tarek! While there are plenty of swoony moments and wedding hijinks, this is also the story of a girl struggling to carve a path for herself as an individual when she’s been tangled with her family business for so long. My past main characters have tended to know exactly what they’re passionate about and what they want to do with it—that’s not the case with Quinn, and I hope her story resonates with anyone who’s still trying to figure that out.” 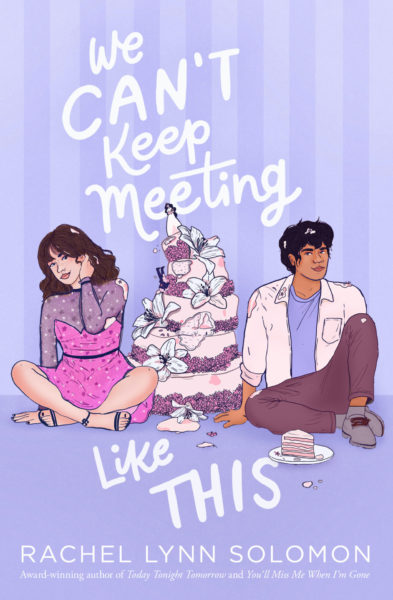 A wedding harpist disillusioned with love and a cater-waiter who’s a hopeless romantic flirt and fight their way through a summer of weddings in this effervescent romantic comedy from the acclaimed author of Today Tonight Tomorrow.

Quinn Berkowitz and Tarek Mansour’s families have been in business together for years: Quinn’s parents are wedding planners, and Tarek’s own a catering company. At the end of last summer, Quinn confessed her crush on him in the form of a rambling email—and then he left for college without a response.

Quinn has been dreading seeing him again almost as much as she dreads another summer playing the harp for her parents’ weddings. When he shows up at the first wedding of the summer, looking cuter than ever after a year apart, they clash immediately. Tarek’s always loved the grand gestures in weddings—the flashier, the better—while Quinn can’t see them as anything but fake. Even as they can’t seem to have one civil conversation, Quinn’s thrown together with Tarek wedding after wedding, from performing a daring cake rescue to filling in for a missing bridesmaid and groomsman.

Quinn can’t deny her feelings for him are still there, especially after she learns the truth about his silence, opens up about her own fears, and begins learning the art of harp-making from an enigmatic teacher.

Maybe love isn’t the enemy after all—and maybe allowing herself to fall is the most honest thing Quinn’s ever done.

At this point, I should be strong enough to resist a cute guy in a well-tailored suit.

I knew my ex would be here. In the wedding party. Wearing a tux that would undeniably accentuate the bold lines of his shoulders. And yet when I saw him enter Carnation Cellars, a garment bag slung over one arm, a wire in my brain sparked and a neon sign flashed DANGER, QUINN BERKOWITZ and the next thing I knew, I was shoving myself into a broom closet and shutting the door behind me.

Someone coughs. My heart leaps into my throat as a single light bulb flicks on, illuminating my sister.

Asher’s in her wedding planner uniform: black blazer, black pants, dark hair in a topknot. I’m only a little dressier in a gray sheath and navy tights. When I’m behind the harp, plucking away at Pachelbel’s Canon during the processional, I’m meant to be part of the scenery. Pretty, but not too pretty. Decoration.

“Pre-gaming.” Asher takes a sip from a flask designed to look like a compact. “Just a sip when things get stressful. Calms me right down.”

“Mom and Dad will kill you if they see that.”

“And I value my life too much for that to happen,” she says. “What brings you to my closet?”

“I, uh, know someone in the wedding party,” I say, trying to banish the image of him leaning over me in his car last month, but anxiety-brain grabs hold of it, shines a light on it, hits repeat. “Intimately.”

“That list is really not painting me in the best light.” I lean back against a row of chardonnay and press my lips together in a firm line before letting his name slip through. “Jonathan.”

“Jonathan Gellner! As in, brother of bride Naomi Gellner. Right. He was…” She trails off, as though searching her memory for an adjective I used when describing him to her.

Sweet. Jewish. Probably pissed at me.

We met at a BBYO party, which is about the most Jewish way you can meet someone. He was like, a cardboard cutout of a hot guy: dark hair, blue eyes, one perfect dimple when he smiled. We hadn’t talked about making the relationship official, but I worried it was heading there. This is the first time I’ve seen him since, well, our first time. Everyone says the first time can be painful, but mostly I just felt awkward—so awkward that I ended things via text the following day, three weeks ago. It would be easier if he never had to see me again, if we never had to talk about it. If I never had to think about those twelve minutes in the backseat of his car or the bruise on my hip shaped like the gearshift of a 2006 Honda Civic.

“A bad decision,” I finish for her.

“We’ve all been in uncomfortable situations.” Asher reaches up to keep the light from swaying. “It’s part of the job. Do you think I loved planning the wedding of the teacher who gave me a C in freshman algebra? No, but I kept things professional.”

As my mom always says, we’re in the business of the most important day of people’s lives. Nothing less than our best—that’s her motto.

“I’m trying,” I insist, even as my mind remains set on mapping out the most disastrous ways this wedding could end. Jonathan confronting me on his way down the aisle and demanding an explanation. Jonathan reciting our text history in lieu of a toast. Jonathan requesting a harp rendition of “Like a Virgin.”

Asher holds out the flask, and I take a sip I immediately regret. It feels like swallowing nail polish remover. For a moment, I’m convinced it’s going to come back up, but fortunately it slides down my throat and settles in to war with the anxiety in my stomach.

“Thanks,” I say. “I love it when you condone underage drinking.”

She rolls her eyes, stashes the flask in her back pocket, and opens the door. The light catches the diamond of her engagement ring, or maybe she just knows exactly the right angle to position her hand. Her fiancé messaged me about a dozen ring options before he proposed, wondering what she’d like.

What I didn’t say: that they all kind of looked the same to me.

Asher pulls out the phone she keeps clipped to her belt. On days I’m playing the harp instead of playing my parents’ assistant, I make sure whatever I’m wearing has deep pockets. A moment later, our group chat buzzes against my right thigh.

Quinn: Be there soon

Rachel Lynn Solomon writes, tap dances, and collects lipstick in Seattle, Washington. Her romance and YA novels include The Ex Talk (January 2021), Today Tonight Tomorrow, and You’ll Miss Me When I’m Gone. You can find her online at rachelsolomonbooks.com and on Twitter @rlynn_solomon.