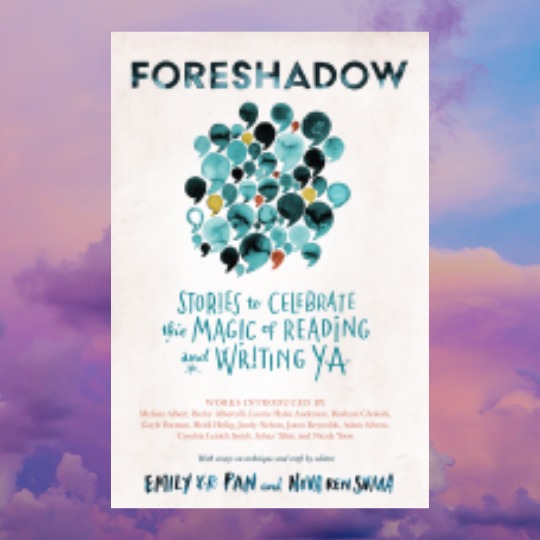 We are so excited to bring you this exclusive excerpt of Foreshadow, edited by Emily X.R. Pan & Nova Ren Suma, out October 20! 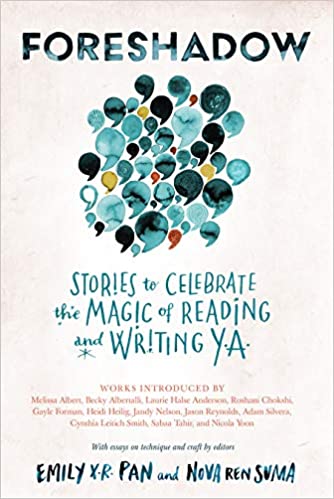 Thirteen Short Stories from Bold New YA Voices & Writing Advice from YA Icons.

Created by New York Times bestselling authors Emily X. R. Pan and Nova Ren Suma, Foreshadow is so much more than a short story collection. A trove of unforgettable fiction makes up the beating heart of this book, and the accompanying essays offer an ode to young adult literature, as well as practical advice to writers.

Featured in print for the first time, the thirteen stories anthologized here were originally released via the buzzed-about online platform Foreshadow. Ranging from contemporary romance to mind-bending fantasy, the Foreshadow stories showcase underrepresented voices and highlight the beauty and power of YA fiction. Each piece is selected and introduced by a YA luminary, among them Gayle Forman, Laurie Halse Anderson, Jason Reynolds, and Sabaa Tahir.

What makes these memorable stories tick? What sparked them? How do authors build a world or refine a voice or weave in that deliciously creepy atmosphere to bring their writing to the next level? Addressing these questions and many more are essays and discussions on craft and process by Nova Ren Suma and Emily X. R. Pan.

This unique compilation reveals and celebrates the magic of reading and writing for young adults.

Kiki missed when Marisol and Luna’s birthday party had involved  pizza, cake, and a PG-13 movie. But Kiki swam and socialized for a good hour, and then she thought it was finally an appropriate time to wish the twins a final happy birthday and make a swift exit. She could only force extroversion for so long.

She looked over at the circle of kids on the kitchen floor.

Kiki scanned their faces. Disappointment tickled her chest the same way it had when Chris, Robby, and the rest of the lacrosse crew had entered the party without Kastov.

It wasn’t like she was obsessing over him. She wasn’t here for Kastov; she was here because Marisol and Luna were nice, and she never missed one of their birthday parties.

It would be silly to dwell on a boy she had talked to for just seven minutes, obviously.

Sighing, her multicolored beach towel tight under her armpits, Kiki hit the snack table. Amari paused her conversation with Nayelie to pass the vodka, but Kiki shook her head. Her mother had foolproof Mom Senses and would totally be able to tell, even if she had only a sip.

Instead, Kiki shoved a whole handful of popcorn into her mouth, spun, and bumped right into a tall, grinning boy.

Kiki chewed furiously. “Kastov!” It sounded more like Athoff! She spat a few kernels at him, but he didn’t seem to mind.

He wasn’t dressed for a pool party, or any party. He’d come straight from work at Steak ’N Go, judging from the restaurant name stitched onto his red polo. He wore a baby blue snapback backward, tufts of dark hair curling adorably at the edges.

He took a long draw from his Solo cup, then regarded it curiously. “I didn’t know they made these in hot pink.”

“The González twins are very particular about color schemes.” She pulled the towel tighter. “Nice hat. That shade of blue’s my favorite color.”

“I’d let you have it, but I’ve got such bad hat hair that if you saw it,you’d run away screaming.”

And her laugh made him laugh. He looked over at the circle, and then back at Kiki.

She looked away. “Seven Minutes is kind of the worst game ever.” His brow twitched.

“I just think that if you like someone, you should tell them instead of hoping they end up sequestered in a closet with you.”

“I’m being extra, but you know what I mean.”

“Maybe people just wanna kiss other people without all that.”

Alexa spotted them from the circle and pointed a finger at him. “Kastov! Your turn!”

Kiki shook her head. “Got popcorn kernels all up in my teeth. Super gross.”

He chuckled. “What a shame.”

She was grateful that he walked away, leaving her to blush in peace.

He found a spot next to Luna. He said something to her, and the two of them giggled like kids. Kiki was beginning to understand that this was so like him. Always laughing, always smiling, always so damn glad to be there, wherever he was. She wanted to find him annoying, but he seemed so utterly genuine.

Kastov steadied the bottle on its side. It glistened as it spun.

Kiki’s stomach turned. She hadn’t realized until this very moment that she had absolutely no desire to see the bottle land on anyone but her.

Next to her, Hanna got up and ran to the marble island, red punch dripping from her shirt.

It was almost automatic, the way Kiki hurried to take Hanna’s place. The bottle stopped between Izzy and Tommy.

It pointed at her.

Their eyes locked, and her stomach went all fluttery the same way it had after the first spin. But it felt different. It stemmed less from anxiety and more from excitement, which was its own form of torture.

Kastov held the pantry door open for her. “Don’t you even think about kissing me,” he said.

“Check your ego. No one was thinking about kissing you.”

Sophie Meridien is a teen librarian and writer currently residing in south Florida. When she isn’t throwing her favorite books at teenagers, you can find her working on her YA novel, drinking heavily sweetened coffee, and stressing out over the New York Yankees. You can find her on Twitter: @sophiesticates.

Emily X.R. Pan is the New York Times bestselling author of The Astonishing Color of After, which won the APALA Honor Award and the Walter Honor Award, received six starred reviews, was an LA Times Book Prize finalist, and was longlisted for the Carnegie Medal. She lives in Brooklyn, New York. Visit Emily online at exrpan.com, and find her on Twitter and Instagram: @exrpan.

Nova Ren Suma is the author of the #1 New York Times bestselling The Walls Around Us, which was an Edgar Award finalist. She also wrote Imaginary Girls and 17 & Gone and is co-creator of FORESHADOW: A Serial YA Anthology. She has an MFA in fiction from Columbia University and teaches writing at Vermont College of Fine Arts and the University of Pennsylvania. Originally from the Hudson Valley, she spent most of her adult life in New York City and now lives in Philadelphia.

Where Romance and Pop Culture Live Happily Ever After.
All Posts
PrevPreviousFive Reasons the Mountains are Perfect for an Autumn Romance by Janine Rosche
NextExciting Stories for the Christmas Season, Part Two!Next