Fashion Sense and Sensibility: Bridgerton and More by Jackie Barbosa 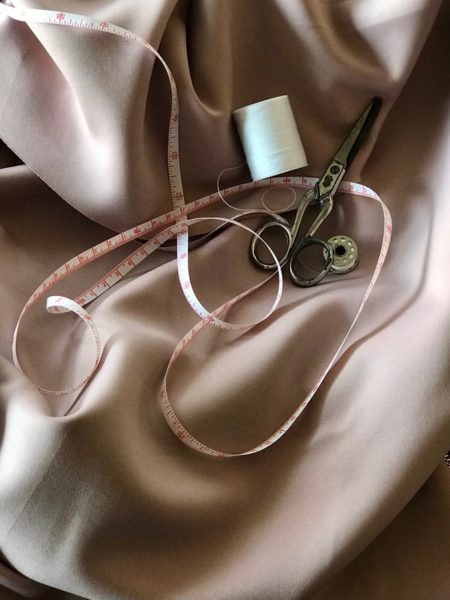 [Note from Frolic: Today, we welcome author Jackie Barbosa to the site. She’s chatting all things historical outfits. Take it away, Jackie!]

If there’s one thing viewers of the controversial Shonda Rhimes-helmed Bridgerton can agree on, it’s the costuming.

Okay, that’s a lie. Because let’s face it, the show’s costume designer, Ellen Mirojnick, deliberately departs from the actual aesthetics of the period in which the story is set. Even the characters who wear Empire-waisted gowns in the pale shades that were fashionable at the time are missing the bonnets any right-thinking Regency miss would wear for a promenade or garden party, and don’t get me started on the corsets and the lack of chemises underneath them! But for every viewer too steeped in fashion history to suspend disbelief, there are likely dozens who aren’t bothered by the garish colors of some of the gowns or by the lack of hoops beneath the skirts of Daphne’s court dress.

But Bridgerton is far from the only production of a Regency era tale that departs from accuracy when it comes to costuming. My dear friend and fellow historical romance author, Eva Leigh, pointed out to me that the 1940 adaptation of Pride and Prejudice, which starred Laurence Olivier and Greer Garson, was deliberately set in the 1830s because the costume designer preferred the “look” of that period to the Regency. Even then, it doesn’t entirely nail the sheer nuttiness of the early 1830s look, which for women featured sleeves the size of party balloons and hairstyles so tortured and elaborate, they look more like hats. To be fair, the sleeves aren’t far off—look at the production still of the Bennet family below alongside a few fashion plates from the period—but the hairdos are positively tame by comparison. 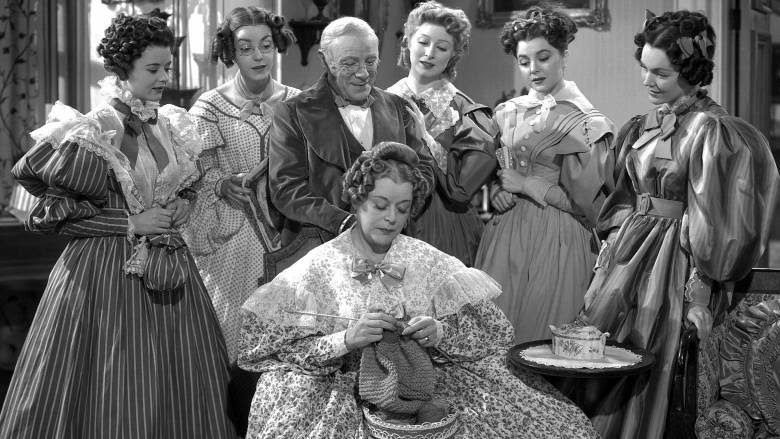 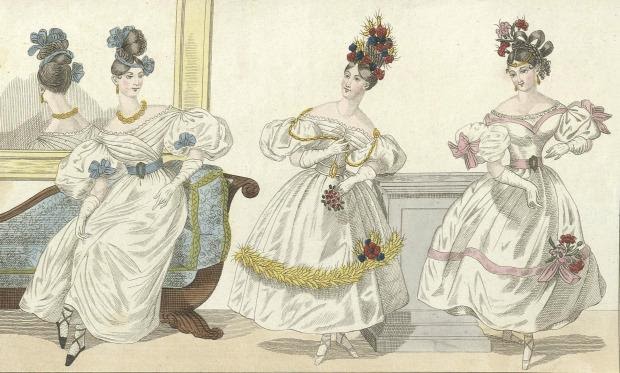 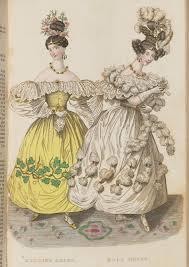 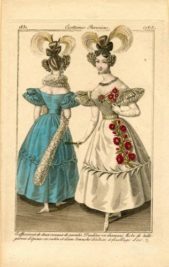 These fashion plates are all from about 1831, which marked the height of the en gigot (literally “mutton leg”) sleeve and “hair as hats” era, but both styles began to appear in the mid-1820s. This is relevant to the Bridgerton production because the last two books in the series, which feature the romances of the two youngest Bridgertons take place in 1825 and 1827 respectively. In fact, one of my favorite combination huge sleeves and “hair-hat” images comes from 1827: 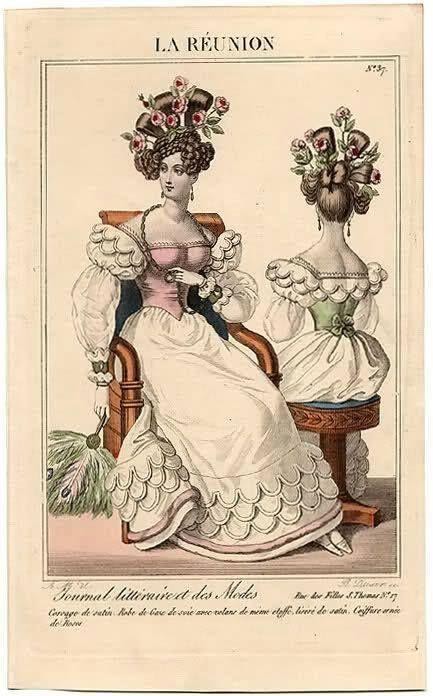 I can’t help but wonder how far the costume designer for those seasons of Bridgerton will go toward period accuracy, because the reality seems more fantastical than fiction! Would contemporary viewers accept such styles as accurate to the period or would they have the opposite effect, leading many to think the filmmakers are having them on?

I also wonder if the relative paucity of romance novels set in the mid-1820s to the mid-1830s is partly due to the incredible—in the sense of unbelievable—styles that were popular. It’s hard to describe these gowns and hairdos without sounding preposterous. (The men looked fabulous, though!) It’s also a difficult period from a marketing point of view, since the Regency ended with George IV’s ascension to the throne in 1820 and the Victorian era didn’t officially begin until 1837. And that’s a bit of a shame, because it’s a fascinating time in British history that includes the early industrialization in both textiles and agriculture, major electoral reform in 1832, and the start of Charles Dickens’ illustrious career as an author.

For most of my career as an author, I’ve focused on writing books set in the Regency, with the few outliers taking place a bit earlier, and I will confess that a large part of the reason I chose to write Regencies is that I think the dresses are lovely. Literally everyone can look good in an Empire-waisted dress, no matter what the costuming of Nicola Coughlan as Penelope Featherington may lead you to believe. (For the record, I’m convinced they’ve got her in some sort of bosom-flattening gear and are placing the waistline of her gowns at about the middle of her bustline, so of course, she looks frumpy. With a proper set of lift-and-separate stays and good waistline placement, she’d look gorgeous!)

But my upcoming series, The House of Uncommons, spins off from another that’s set in the late Regency. The new books feature the children of those couples and their contemporaries, which means the stories have to take place in the 1830s or later. Ironically, I’d planned to write a different Regency-set series, but I wound up writing an epilogue to The Lords of Lancashire that morphed into a prequel. When I did some cursory research, I found myself increasingly excited about writing books set in this politically, socially, and economically turbulent period.

The first book in the series features a hero who publishes an illegal, reformist newspaper and a heroine who writes scathing articles for him. She has a secret, though—she’s the daughter of an earl and even her own father thinks her opinions go too far. A Bit of Rough is scheduled to release on April 2, 2021. The remaining three books in the series will focus on three MPs who were elected to the House of Commons after the reforms of 1832. Advance warning: everyone in this series is a radical do-gooder!

If you’re interested in other romances set in the wild and wooly period of the mid-1820s to the beginning of the Victorian aside from the last few Bridgerton novels. Lisa Kleypas has written several books set in the 1830s, including Where Dreams Begin (1830), Because You’re Mine (1833), and Suddenly You (1836). Most of Courtney Milan’s books are set solidly in the mid-Victorian, but The Governess Affair is set in 1835 and is one of my favorites of hers. Finally, Loretta Chase’s most recent series, The Difficult Dukes, is set in 1833.

And one way or another, I hope you are as curious as I am to see what comes next in Bridgerton. 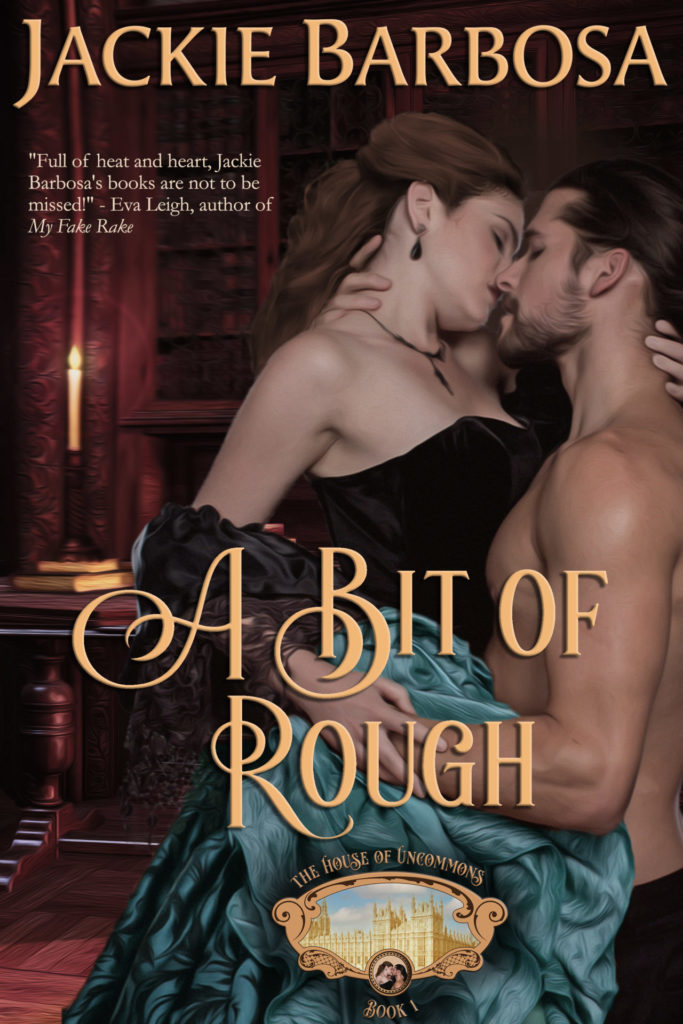 A Bit of Rough by Jackie Barbosa, out April 2!

Lucas Delgado Guerrero’s skin is too brown and his accent too foreign for him to feel truly at home in England. Returning to Mexico, which he scarcely remembers, however, is hardly a choice. So he remains in London, publishing an illegal newspaper devoted to reformist and revolutionary causes. One of his most popular writers is the intriguing and mysterious Polly Dicax, who delivers sharp, witty screeds by messenger every week.

At twenty-five, Lady Honora Pearce is too busy writing seditious treatises to pay much attention to men. Especially when marrying would mean giving up the very rights she argues for in her fierce diatribes. She is, however, intrigued by the editorials written by one of her publishers. Here, at least, is a man with worthy ideas and ideals. Not that she ever expects to meet him, since both their identities must remain secret. But everything changes when circumstances force her to deliver her weekly column herself and, on the heels of her arrival at the printer’s shop, the police raid the premises.

To protect the shopkeeper and themselves, Honora and Lucas must hide together in a small chamber. They shouldn’t have to kiss, but somehow, they do. And when Honora finds she can’t stay away, Lucas discovers he can’t refuse her, even if he can never be more than her bit of rough.

Where Romance and Pop Culture Live Happily Ever After.
All Posts
PrevPreviousBooks I Love to Give as Gifts by Brenda Rothert
NextHow To Write Your First Romance by Elizabeth ChatsworthNext