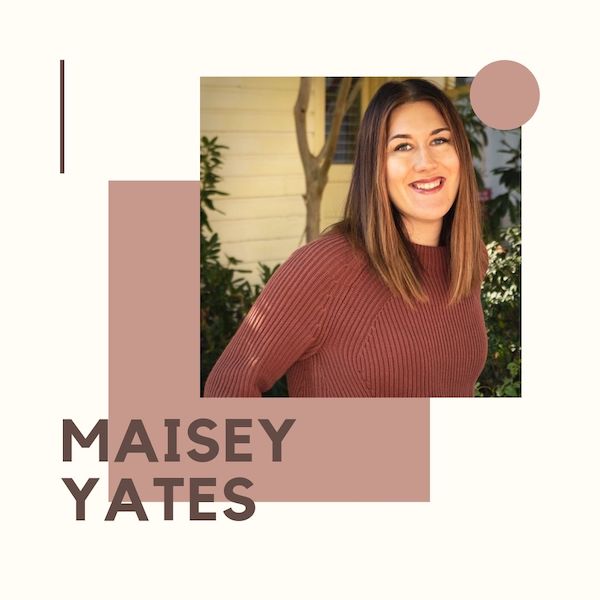 Once upon a time, I wouldn’t even think about reading a book if I knew it was part of a series. I preferred things to be one and done. Give me a standalone, so I could move onto something totally different next. Then I began reading romance, and the whole game changed. There’s something really special about finding a series, where you grow this attachment to the characters, get totally immersed in the setting and wholeheartedly love each book individually but also for what it builds upon the series as a whole. The Gold Valley series by Maisey Yates is my current series obsession and I was so excited when she agreed to answer a few questions I had. 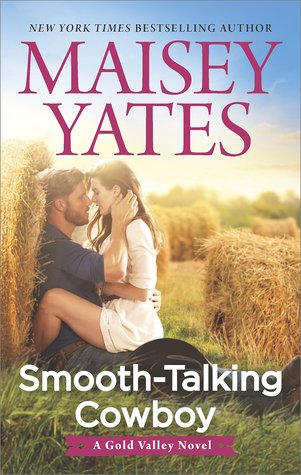 Bree: Thank you so much for chatting with me! I have quite a few questions to ask, but the first that I absolutely must ask is, how did you become a romance reader and do you remember the first romance novel you read?

Maisey Yates: I started reading romance relatively late. I hear a lot of stories about people finding their first at thirteen or fourteen, but I was twenty-one when I read my first genre romance novel. I read a lot of books with romance, and that was always my favorite part of the book. I would live for moments of romance in books that were more YA or inspirational women’s fiction, historical or mystery, and be sad when there wasn’t more, or they didn’t end happily. When I picked up my first Harlequin Presents, I was 21. And I went: OMG it’s a whole genre of MY FAVORITE THINGS. That’s when I found my home, as both a reader and a writer.

I’m not 100% sure what my first romance was. A few of the books in my first romance novel haul from Goodwill were a Harlequin Presents by Miranda Lee, (in addition to a whole bunch of other Presents) a historical by Heidi Betts and Chase Wheeler’s Woman by Charlene Sands.

Bree: You sold your first book at age 23 which is amazing! At what point in your life did you notice the shift from being a reader to wanting to author a book of your own?

Maisey Yates: I was always writing stories. I was so excited in first grade when we learned quotation marks because I understood how to do dialogue after that. But I was always writing what I was reading. So, children’s stories, middle grade adventure stories (many variations of Hatchet, but with a girl, and usually a cute boy also survived the plane crash) fantasy YA, then inspirational historical, but I never finished anything. When I discovered romance it all clicked into place for me. I inhaled 300 Harlequin Presents the year I first discovered romance. And I thought: this is it. This is what I’m going to write. My first Presents manuscript was the first thing I ever finished, and it’s the first book I sold. 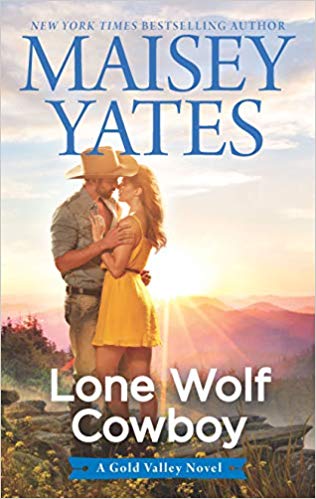 Bree: I just recently wrapped up Cowboy to the Core which is book six in your Gold Valley series and already have Lone Wolf Cowboy ready to go! You are a writing machine!  What does a typical day of writing look like for you?

Maisey Yates: Typical changes for me, but I try to keep work contained to Monday – Friday 8-ish to 5. I usually have an idea of what I need to get done (how many words to make deadline!) plus other tasks like edits, social media, wasting time taking quizzes to find out what Disney Princess I am (super important!) In all seriousness, I’m very type A about my schedule, and hitting deadlines. With so many projects lined up I have to be. I like to imagine I’m Indiana Jones running away from a boulder. I would like to not be crushed. So that requires a lot of discipline, and a clear idea of what I need to accomplish each day. Not to say I don’t slack off. I do, a lot. But I have a ‘word budget’. I know exactly how much I need to write every day to meet my deadline, and I’m very strict about it.

Bree: What has been the most random place an idea for a story has come to you?

Maisey Yates: Oh gosh. While my kids were watching cartoons. Disneyland. Church. Sitting in traffic. I send myself a lot of emails with ideas from very strange locations so I don’t forget them!

Bree: You have worked magic with the Gold Valley series. I have loved every book. You write the characters internal conflict so well; I really get to know and understand the internal battles they’re fighting and you can’t help but root for them. Now we are really seeing this merge between the Dodge’s and the Dalton’s with McKenna and Grant, and now Jamie and Gabe. I’ve began secretly fangirl plotting where all these family secrets are going to take the series. When you sat down to write book one, did you have any idea that story would lead into the series it is now, or was it the idea for the series that sat you down to write book one?

Maisey Yates:  (Thank you! I’m so glad you’ve been enjoying it!) It’s a mixture of both. Because the books are tightly connected I do need to know a bit about characters that will feature in later books, but I’m also prone to deciding to change everything at the last minute. Grant from A Tall, Dark Cowboy Christmas is a great example of that. I got to his book and then didn’t want to write it. I hated my idea. I wasn’t excited to learn more about him. So I started thinking about things his family might NOT know about him. One of my friends, Caitlin Crews, said: Can he be a virgin? I said NO HE CAN’T he was married and his brothers would know…unless they don’t know, and unless… So there you have it. That’s how I ended up with a virgin widower. As far as the Dalton siblings go, they evolved naturally from McKenna’s story, and I didn’t initially plan to make the saga of their dad and his secret children quite so extensive, but once I got into it it just seemed right! Which is sort of my process in a nutshell. I make plans very early on and reserve the right to throw them all out if they end up not working for me.

Bree: Jamie Dodge, our heroine in book six represented so much for me. She felt very much the 2019 heroine. She was tough because she always had to be tough. She realized so much around her was changing though and we see her begin the shift towards her becoming. As the writer, what did you hope readers took away from Jamie’s journey?

Maisey Yates:  Jamie is one of my favorite heroines. I think what I wanted to show with Jamie was the way she found strength in vulnerability. Being tough and strong doesn’t mean never crying, or never letting people close. And as Jamie learned that, I think she taught Gabe the same thing. What I loved about writing Jamie’s journey was that I felt like it was her journey to becoming a whole person. Not just the tough girl. Not just someone who tried to make life easier and more comfortable for those around her. But someone who could cry if she needed to, who could ask for things, could admit when she was lonely.  Having feelings is tough, it’s brave. Admitting you want and deserve more is brave. What I loved about Jamie was showing that evolution, and that there’s more than one way to be strong.

Bree: What is the last book you read that you couldn’t get off your mind once you finished?

Maisey Yates: Cold Heart, Warm Cowboy by Caitlin Crews. (Yes, the same person who gave me the idea for Grant, she’s a friend, but I genuinely love this book!) It’s an amnesia story. The hero is a rodeo cowboy who lost his memory after an accident and doesn’t remember his secret marriage to the heroine – or that she was pregnant with his baby. and I love what she did with her heroine, who’s this great, tough and sparkly rodeo queen. 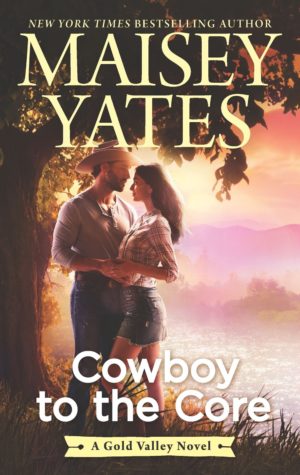 Bree: What is one misconception about the romance genre that you want to lay to rest?

Maisey Yates: I think that tracks with Jamie’s lesson in Cowboy to the Core. Vulnerability isn’t weak, loving people isn’t weak. Hope certainly isn’t weak. The romance genre is about feelings and societally we are so leery and disdainful of feelings. The idea that falling in love and striving for a happy ending is somehow a cop out, or silly, or predictable astonishes me. The choice to love and be loved is brave. Having hope even when you’ve experienced dark times is incredibly brave. My experience of people who read romance novels is not that they’re delusional in any way. They’re prosecutors who work on child abuse cases, ER doctors, just…women who live in the world. They understand how hard life can be, they choose to focus on stories of love and hope.

Bree: Lastly, what are you currently reading, and what’s one self-care recommendation?

Maisey Yates: I’m about to start an arc of Bringing Down the Duke by Evie Dunmore and I’ve heard nothing but fantastic things about it. I think category romance is always a great self-care read. They’re quick, they’re satisfying, and they deliver on the romance fantasy you’re craving. Like fun sized snickers. A full flavor romance punch in a bite sized package. (and you can binge a whole bag!) They were my gateway to the genre as a reader and a writer, so I’m all about it. If you like a bit of suspense, Nicole Helm’s Intrigues are fantastic. I especially love Wyoming Cowboy Marine. If fantasy and angst are your thing (they’re mine!) the Presents line has you covered, and I love Jackie Ashenden’s debut in the line Demanding His Hidden Heir.

Thank you so much to Maisey Yates for chatting with me. Her chat is so inspiring in so many ways. I can’t recommend her Gold Valley series enough if you’re looking for a series to get completely engrossed in and if you’re sitting at home right now indecisive on starting the novel you’ve been putting off writing, or have been too hard on yourself, remember this: the first romance she sat down, wrote and finished, was the first romance she sold. Go for it!

Bree Hill is a Missouri girl, currently living in and reading romance in South Texas. She's a military police officer and total girl's girl. When not working or chasing around one of her 3 kids, she can be found at one of her local coffee shops with a latte and her current read, rewatching I Love Lucy or in her kitchen trying out recipes she's found on Pinterest.
All Posts
PrevPreviousModern Love Poems: Speaking of Time by Shrutee Choudhary
NextDaily Frolic: This Socially Awkward Alpaca is All of UsNext