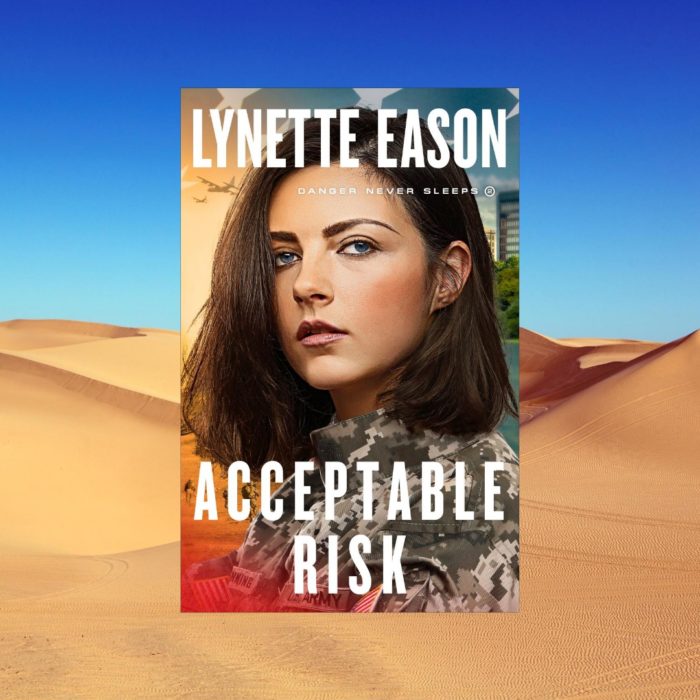 [Note from Frolic: We’re so excited to bring you this exclusive excerpt of Acceptable Risk by Lynette Eason !]

Sarah Denning is a military journalist with the Army in the Middle East when her convoy is attacked and she’s taken hostage. When former Army Ranger Gavin Black is asked by his old unit commander–Sarah’s imposing father–to plan an extremely risky rescue, he reluctantly agrees and successfully executes it.

Back in the US, Sarah is livid when she’s discharged on a false psychiatric evaluation and vows to return to the Army. Until she learns of her brother’s suicide. Unable to believe her brother would do such a thing, she puts her plans on hold and enlists Gavin to help her discover the truth. What they uncover may be the biggest story of Sarah’s career–if she can survive long enough to write it.

Strap in for another breakneck nail-biter from bestselling romantic suspense author Lynette Eason that will have you up turning pages long into the night.

“Hold on!” Gavin spun the wheel and slammed on the brakes. Tires squealed, the truck slid sideways into the right lane, and the sedan zipped past. The driver hit his brakes. A gun popped out of the back driver’s side window and a hail of bullets split the air, pounding down the driver’s side of the truck as the sedan spun out off the road onto the shoulder.

“Get down!” Gavin let the truck rotate a full one-eighty while he grabbed Sarah’s arm and pulled her head to his right thigh.

Sarah covered her head while Gavin floored it, flying past the other car still trying to get back on the road.

He spared a quick glance at her while the needle climbed to eighty, then eighty-five. Sarah sat up. “You okay?” he asked.

She held her side with one hand, lips clamped, face pinched. Her right hand gripped her seat belt. “Yes.”

She grimaced. “As well as I can be after being shot at and almost run off the road.” Her irritation eased. “That was some really good maneuvering back there, Black.”

“Just a little defensive driving. Fortunately, it was clear enough to do that, otherwise . . .”

“Good, give them the description while I figure out where to go from here.” Gavin glanced in the rearview mirror while his heart pumped. His brain was already in combat mode, that zone where everything he did was geared for survival—and in protection of the woman sitting beside him.

“They’re coming back,” she said, breathless, her gaze on the mirror, phone in her right hand.

“I see them.”
“Give me a weapon. I know you have a gun in here somewhere.” “Glove box, but it’s a peashooter compared to what these guys are using. Leave it and just stay down.”

An eighteen-wheeler barreled toward them in the other lane.

Gavin passed an exit and a car pulled onto the road behind him, causing the sedan to fall back. “This could work out nicely,” he muttered.

“Nothing. Just thinking.” And praying. He heard her talking to the dispatcher.

“The tunnels are just ahead,” she said, breaking off her conversation midsentence. “If they catch up and decide to start shooting in there, it won’t be pretty.”

“Yeah. And now I’ve got to worry about the person behind me.”

Gavin sped closer to the mouth of the tunnel while the sedan fell behind, trapped by the slower-moving Honda between them and the eighteen-wheeler at his side. Gavin pressed the gas pedal harder.

Sarah glanced at him. “She said they’re on the way, but three minutes out.”

He knew this highway like the back of his hand. If he could get through the tunnel, he could disappear. Maybe. A quick glance behind him showed no sign of the sedan that was still blocked by the truck and the other vehicle. “Keep watching for them,” Gavin said. “Let me know as soon as you see them behind us.”

He pressed the gas a fraction harder and within seconds was finally in the tunnel. The fluorescent lights zipped by over his head. “I don’t see them,” she said. She spoke the words into the phone as well.

“Good, just need a couple more seconds.” He continued around the curve, slowing. “Be ready, I’m going to slam on the brakes.”

“Right—at least not close—and no sign of the shooter.”

He shot out of the tunnel and hit the brakes while directing his truck onto the shoulder.
Before he came to a full stop, he threw the transmission into reverse. The tires spun as Gavin backed through the gap in the dismantled guardrail, guiding the bed of the truck onto the dirt road that led down the side of the mountain. To anyone exiting the tunnel, she and Gavin would be invisible. Hopefully. As long as those behind them weren’t looking in their rearview or side mirrors.

Gavin could only pray whoever was in the vehicle would be focused on the lane ahead, thinking he and Sarah had disappeared around the curve.

Sarah pressed a hand against her side, lips pinched, but her attention was on the road. “There,” she said. “They just came out. He’s flying, but I got a partial plate. It had an H and a 1.” She spoke into the phone for the dispatcher.

“And the sedan is a Buick Regal,” Gavin said. “Sportback, I think.”

“Good eye. “She passed on the information and nodded. “Okay. Thank you.”

The Buick was soon out of sight and Gavin waited a good minute before he pressed the gas and roared up the dirt road, maneuvering through the deconstructed guardrail once more and back onto the highway.

“How did you know that was there?” she asked.

“I come this way a lot. One of my unit buddies and his family live in Asheville. Workers have been in this area for months.”

“That’s fortunate.” She rubbed her nose and shook her head. “I can’t believe this.”

He shot her a tight smile. “Keep your eyes open and let me know if you see that sedan ahead of us. I sure don’t want to catch up to it.”

Gavin drove slowly, hoping the driver was speeding, thinking he was going to catch up with them. Sirens sounded behind them. Sarah gave the dispatcher their information and a cruiser pulled up beside them. “They want us to get off at the next exit,” she said.

Sarah hung up and Gavin took the off ramp. He followed one of the small-town back roads to an out-of-the-way service station. Two local police deputies pulled in behind him. He kept his hands on the wheel and noted Sarah made sure hers were on the dash.

When the officer motioned for him to roll the window down, Gavin did so.

“No, bullets got the truck, not us. Did dispatch fill you in?” “She did. Two highway patrolmen are in pursuit of the sedan.

We’re here to take care of you. Why don’t you and the lady step out here and give us statement?”

Lynette Eason is the bestselling author of Collateral Damage and Protecting Tanner Hollow, as well as the Blue Justice, Women of Justice, Deadly Reunions, Hidden Identity, and Elite Guardians series. She is the winner of three ACFW Carol Awards, the Selah Award, and the Inspirational Reader’s Choice Award, among others. She is a graduate of the University of South Carolina and has a master’s degree in education from Converse College. Eason lives in South Carolina with her husband and two children. Learn more at www.lynetteeason.com.