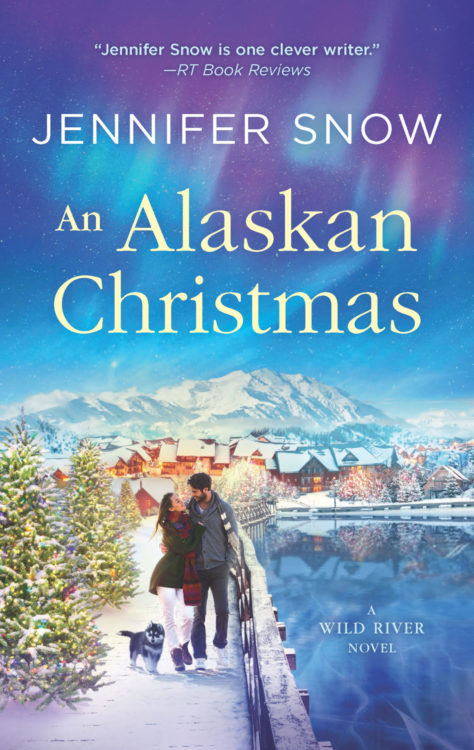 We are so excited to bring you an excerpt of Jennifer Snow’s holiday romance An Alaskan Christmas. Here’s more about her new series and the first book by Jennifer Snow.

In her Own Words

My latest steamy romance series, Wild River, is set in the Alaskan wilderness and features the strong, brave, and obviously sexy members of the Search and Rescue team. Writing these intense, adrenaline-fueled scenes definitely had my heart pumping with anticipation and excitement, and I hope readers will enjoy the ride as well by picking up a copy of An Alaskan Christmas in time for the holiday season.

In this exclusive excerpt, readers are introduced to our hero, Reed Reynolds, as he leads his team on a rescue mission to save a little girl lost on a dangerous, jagged, snow-covered mountain peak. Putting his own life on the line is just another day on the job in Wild River, Alaska where anything can happen this holiday season…even love.

About An Alaskan Christmas

If there’s one gift Erika Sheraton does not want for Christmas, it’s a vacation. Ordered to take time off, the workaholic surgeon reluctantly trades in her scrubs for a ski suit and heads to Wild River, Alaska. Her friend Cassie owns a tour company that offers adventures to fit every visitor. But nothing compares to the adrenaline rush Erika feels on being reunited with Cassie’s brother, Reed Reynolds.

Gone is the buttoned-up girl Reed remembers. His sister’s best friend has blossomed into a strong, skilled, confident woman. She’s exactly what his search-and-rescue team needs — and everything he didn’t know he craved. The gulf between his life in Wild River and her big-city career is wide. But it’s no match for a desire powerful enough to melt two stubborn hearts.

Thirty-seven hours into the search and the twisting in Reed’s gut grew worse by the minute. The call from the state troopers’ office reporting a missing ten-year-old girl on the side of Wild Canyon Peak — where she’d been snowshoeing and camping with her parents — had sent over fifty search and rescue volunteers out on the mission immediately. November in the mountains was cold, unpredictable and they’d already experienced one small avalanche earlier that month.

Reed pulled up his scarf and readjusted his head¬lamp. At six thirty, it was already pitch-black outside, making the search harder and his confidence fade. The bitter wind that had picked up since nightfall cut through his thermal jacket and the crew members near him — walking the trails where the young girl had last been seen — looked as tired and anxious as he felt. They were reaching a critical point and his only consolation was knowing that the girl had been dressed for the weather.

Snow crunched beneath his boots as he neared the edge of a cliff, peering over in the hopes of seeing the little girl. Snowdrifts made visibility in this area tough. He scanned the area as he took slow steps forward…his ten years of experience on the Wild River Search and Rescue making his senses sharp and focused, despite lack of sleep and the intensity of the unpredictable weather in the high altitude.

As he approached the drop-off, he saw an orange scarf caught on a tree branch to his right. He almost released a sigh of relief– it was the first physical sign they were in the right area where the girl might be. But the proximity of the scarf to the edge of the cliff had his pulse racing. The high angle, steep incline was treacherous…the slippery rocks a major hazard.

“Orange scarf located,” he said over the radio. “Proceeding with caution to edge of Wild Canyon Peak, hoping to obtain a visual.” Hooking a carabiner to his belt and fastening the harness support to the tree, he moved toward the edge.

It was dark and the light reflecting off the snow hindered his ability to see into the depths, so he shut off the light as he scanned the rocky edge. “Rebecca!” he called, his voice reverberating off the mountain.

To his right, several other rescuers approached. He motioned for them to stay back, as a block of snow gave way beneath his right foot, shaking him slightly off balance. The child may not have realized how close she was to the edge, because of the unsteady footing and false ground.

“Rebecca!” he called again, moving closer. Rocks covered in shimmering frost were like glass beneath his boots. He peered over the edge, a shiver running through him as he took in the thousand-foot drop. No one could survive that fall.

The sound was barely audible above the howling wind, but a rush of heat flowed through him as he turned toward it, about twenty feet below him to the right. Turning on the light again, he scanned the area. There she was. Sitting on a six-inch-wide ledge, her head rested against the side of the mountain, her eyes shut tight. Wind beat against her with so much force, Reed feared she could be blown off the ledge any second.

The clock was ticking. They needed to move fast.

“Hi Rebecca. I’m coming to help you. Just stay right where you are. You’re doing great.” He had no way of knowing if that was true or not, he couldn’t assess her well-being from this distance, but he needed to reassure her. Providing relief and a sense of safety was an essential part of the rescue. If the endangered believed they were now safe, they were more proactive in their rescue.

“I’ve located Rebecca. Side of Wild Canyon Peak. She is responsive,” he said over the radio, as two crew members approached after securing their own harnesses.

“How are we proceeding?” Wade Baxter, one of the rescue leaders, asked.

It was Reed’s month as head rescue leader, therefore he was calling the shots. “I’ll rappel to her. Assess injuries and check approach angles. Get a litter ready in case we need it.”

The man nodded, motioning forward two support crew members who dragged the carrier on the snow behind them

Reed began his descent. “Rebecca, I’m going to come to you. Stay where you are. Just relax and don’t move.”

Her nod was small. She was clutching several branches protruding from the mountain. She’d lost her right glove, as well as her scarf, but other than that, her skin was covered, protected from the elements. Thank God. Frostbite set in within minutes in this cold.

He moved lower and lower until he reached the ledge. “Hi. I’m Reed. Can you open your eyes for me?” He wanted her to know she was safe, that she could trust him…but he would need her cooperation to get them out of there as quickly as possible.

He saw the shape of her lips more than he heard the word.

Slowly, her eyes opened and the terror in them made his chest tighten. He ignored the what-if scenarios running through his mind and cleared his thoughts.

Save the kid, get everyone back safe. Simple. Yet, not an easy task. Expect the unexpected.

“My hand was hurting but not anymore…”

Frostbite. Hopefully, they weren’t too late.

He glanced toward her legs, where her snowshoes still dangled from her feet. The right leg was twisted in a grotesque angle. Numb and in shock right now, she couldn’t feel the severity of the injury, which was good. He hated to think that she’d been out there that long alone, scared and in pain. Keeping his voice calm, he radioed. “We will need the litter. Start lowering it to the left.”

“Is my leg broken?” she asked, daring a glance at it.

“Yes.” He wouldn’t lie. She would need to be prepared for what came next. “But we are going to get it fixed up in no time. We have an ambulance waiting on the trailhead. Just a few more minutes…and your parents are there…”

“No!” She moved away, clinging to the branches. New fear on her face.

“Whoa, hold up. Stay still.” He’d seen this before. Lost children were surprisingly terrified that their parents would be angry. He knew after interviewing hers that nothing could be further from the truth. The young couple was going crazy — worried about their little girl. Relief would be their only emotion when she was brought back safely. “Your mom and dad are not mad. They are worried and they love you. They can’t wait to hug you.” Reunions after rescues were the only consistent element to this job.

Tears slid down the little girl’s cheeks. “I was supposed to stay with the group,” she whispered.

“Getting lost happens. This isn’t your fault.” He glanced overhead and saw the litter approaching. To the left of it, Wade rappelled down the mountain. About two minutes away. Adrenaline soared through his veins as he mentally prepared for what came next.

“I’m glad you found me,” she said, as the litter reached them. “What’s that?”

“It’s kind of like a stretcher. It will help me get you back up the mountain safely, without hurting your leg.” Too much.

“How do you want to do this?” Wade asked, dangling next to him.

“I’m going to move closer and harness her in case that ledge decides not to hold,” he said as quietly and calmly as possible. “Then I need you to bring the litter closer.”

Reed turned to Rebecca. “Okay. My friend Wade and I are going to get you to safety and I need you to be as brave as you have been out here alone, okay?”

“And you’re sure my parents aren’t mad?”

He smiled. “Darling, believe me…if there’s anything crazy on your Christmas wish list this year, about an hour from now will be the best time to ask for it.” He winked at her and her frostbitten lips curled into a tiny smile.

Time to get her home. 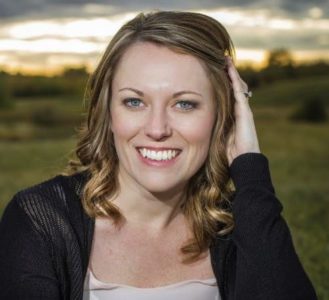 Jennifer Snow lives in Edmonton, Alberta with her husband and four-year-old son. She is a member of RWA, the Alberta Writers Guild, Canadian Authors Association and SheWrites.org. Her first Brookhollow book was a finalist in the Heart of Denver Aspen Gold contest and the Golden Quill Award. 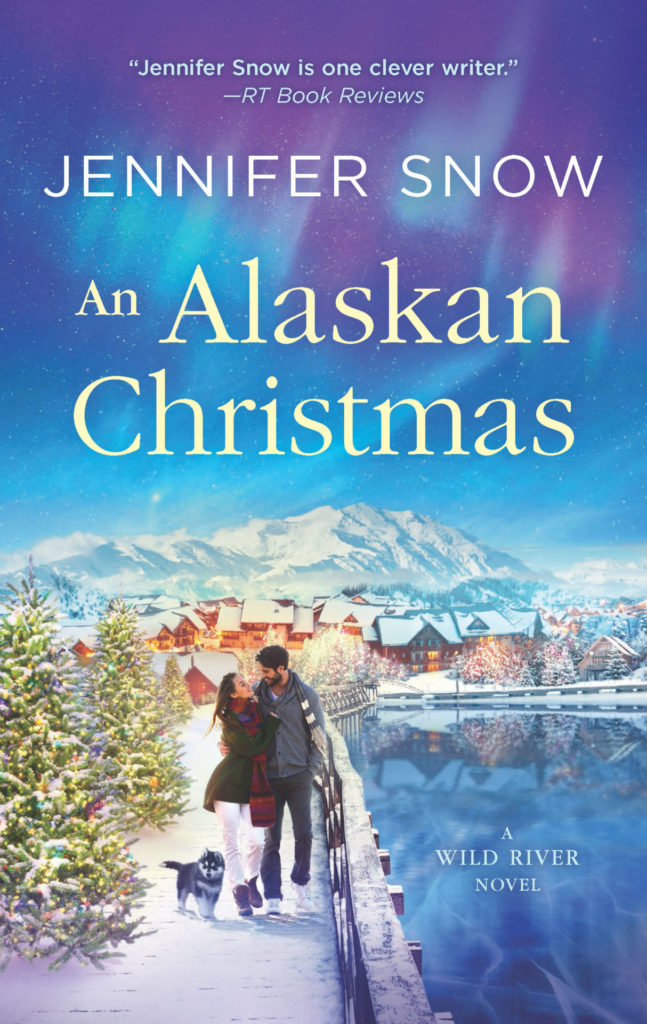 An Alaskan Christmas by Jennifer Snow, out now!

If there’s one gift Erika Sheraton does not want for Christmas, it’s a vacation. Ordered to take time off, the workaholic surgeon reluctantly trades in her scrubs for a ski suit and heads to Wild River, Alaska. Her friend Cassie owns a tour company that offers adventures to fit every visitor. But nothing compares to the adrenaline rush Erika feels on being reunited with Cassie’s brother, Reed Reynolds.

Gone is the buttoned-up girl Reed remembers. His sister’s best friend has blossomed into a strong, skilled, confident woman. She’s exactly what his search-and-rescue team needs — and everything he didn’t know he craved. The gulf between his life in Wild River and her big-city career is wide. But it’s no match for a desire powerful enough to melt two stubborn hearts.

Keira Soleore writes for the International Examiner and Cogitations & Meditations. She enjoys connecting with readers on Twitter (@keirasoleore) and through her website (www.keirasoleore.com). Her interests include medieval manuscripts, philosophy, poetry, picture books, choir, sunshine and beaches. Keira is a pseudonym.
All Posts
PrevPrevious100 Days in Europe: Episode 9
NextBookish Stocking Stuffers to Pick Up this Black Friday!Next