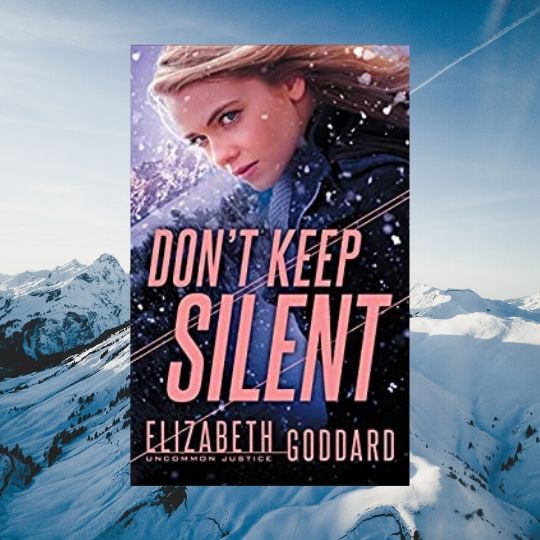 We’re so excited to bring you this excerpt of Don’t Keep Silent by Elizabeth Goddard, out June 30!

Investigative reporter Rae Burke will do anything to find her missing sister-in-law, even if it means facing Liam McKade, a man who almost lost his life saving hers. A former DEA agent, Liam thought he could find peace at his Wyoming ranch, but he just doesn’t feel at home anywhere anymore. When the reporter who blew his cover on an important investigation inserts herself back into his life, he’s less than thrilled. But Rae’s keen investigative skills have led her down the right path–and directly into the dragon’s mouth–leaving Liam no choice but to protect her. As the danger increases, the past they both tried to flee catches up to them, along with the feelings they once had for each other.

Bestselling and award-winning author Elizabeth Goddard plunges you into a fast-paced, high-stakes story of honor, forgiveness, and justice.

This could not be happening.

Instinct took over, and he pressed the accelerator. His laser focus zeroed in on the curvy mountain road ahead of him.

Could he make those turns at this speed? Reason warred with instinct. Liam gripped the wheel, tension cording his neck.

The curvy, two-lane mountain road was treacherous on a good day, even without a thin layer of ice beneath the snow.

The Hummer sped up. It could have a more powerful engine. Liam’s one advantage—the Hummer was a slower, heavier vehicle. With the current road conditions, that advantage might not matter.

Liam skidded over into the wrong lane, then swerved back into the right lane. The driver’s intention was clear—to cause death.

“That thing is big, Liam. You can’t fight that. What are we going to do?”

“It’s slower. We’re coming up on a rise. I can pick up speed and put more distance between us.”

Maybe he could beat them at their own game. He floored it. Except he had to slow down on that switchback coming up or he’d never make it. Forcing Liam to increase speed and then lose control could be the pursuer’s strategy.

He ground his molars and slowed the truck. Speed limit signs warned to take the curve at fifteen miles per hour.

In the rearview mirror, he watched the Hummer close the distance. Much too soon it would catch up to them. As he slowed to take the curve, he mentally willed his tires to grip the snow and ice and stay on the road. As he steered into the curve, he leaned to the right with the momentum.

The vehicle straightened out and he punched it again.

While Rae made the emergency call, Liam sped up and almost left the Hummer behind.

“Hello? Yes. I have an emergency. Someone is trying to push us off the road. Please help!”

Liam relayed their general location along the highway.

Eyes wide with fear, Rae glanced at him. “Hello? Hello? I think I lost the call. Can you believe it? Maybe they got what they needed to help us. I’ll try to call them back when I get a signal again.”

But law enforcement—Wyoming Highway Patrol or the county—would never make it in time to save them. That burden was on Liam’s shoulders alone.

He wished he could stop, get out, and face off with whoever pursued them. Who was behind them? The man in the black ski mask? But he had no good options.

“I think you’re coming up on the curve too fast,” she said.

“I don’t need a back-seat driver.”

“I’m in the passenger seat.”

But she was right. The road had been carved out of the mountain—rock on one side and a gorge on the other. He pumped the brakes to slow them. He had to gain control—accelerate enough to escape their pursuer but not too fast or he’d propel the truck right over the mountainside.

If he could just make it to the valley.

Whoever was chasing them probably also had a weapon. Liam didn’t need to get into a shootout with Rae caught in the middle. Only she wasn’t in the middle—she was the center of the conflict. She was the target. Stopping to face off would give their pursuer the advantage.

Besides . . . “And where would you like me to do that? I have a snow berm on the right masking the rock wall behind it. And a mountain cliff on the left where the berms have fallen away, leaving only a guardrail. I’m doing my best here, okay?” Oh yeah . . . and a bridge coming up.

The driver behind them was equally determined.

Whipping around another switchback, Liam again increased speed on the snow-packed road. “Although I might consider stopping right in the middle of the road and facing off with him if you weren’t in the vehicle with me.”

He pursed his lips as tension built in his neck and his knuckles turned white from squeezing the steering wheel.

“There’s another forest road up ahead. If we can make it to that, I can turn off. We’ll go as far as we can, but then when I stop, I want you to get out and hide in the woods.”

“Would hiding in the woods be less dangerous?”

After that, he wasn’t sure what he would do.

He’d grown up driving in the mountains on icy, snow-covered roads. This ridge, part of the gorge, was a steep, rocky wall with an ice-covered river at the bottom. It never once occurred to him that he might fall victim to these treacherous roads one day. The thought of plunging down a mountainside had never scared him.

Elizabeth Goddard is the bestselling author of more than forty books, including Never Let Go and the Carol Award–winning The Camera Never Lies. Her Mountain Cove series books have been finalists in the Daphne du Maurier Awards and the Carol Awards. Goddard is a seventh-generation Texan and can be found online at www.elizabethgoddard.com.