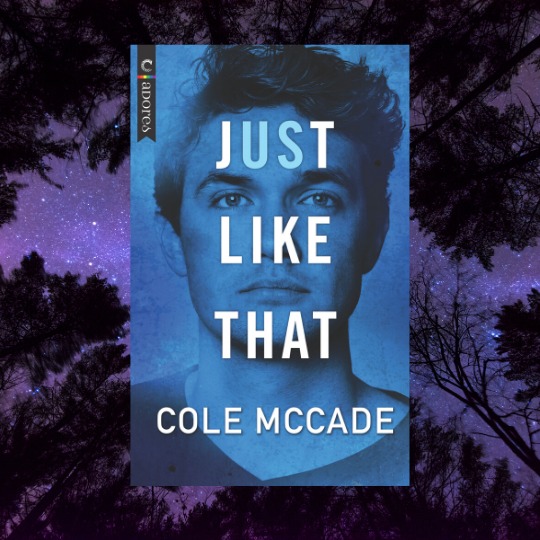 In Just Like That, Carina Adores author Cole McCade introduces the reader to Albin Academy, a private boys’ school where some of the world’s richest families send their problem children to learn discipline and maturity out of the public eye.

Summer Hemlock never meant to come back to Omen, Massachusetts.

But with his mother in need of help, Summer has no choice but to return to his hometown, take up a teaching residency at the Albin Academy boarding school — and work directly under the man who made his teenage years miserable.

Forbidding, aloof and commanding, psychology instructor Fox Iseya is a cipher who’s always fascinated and intimidated shy, anxious Summer. But that fascination turns into something more when the older man challenges Summer to be brave. What starts as a daily game to reward Summer with a kiss for every obstacle overcome, turns passionate, and a professional relationship quickly turns personal.

Yet Iseya’s walls of grief may be too high for someone like Summer to climb…until Summer’s infectious warmth shows Fox everything he’s been missing in life.

Now both men must be brave enough to trust each other to take that leap.

A few moments later Summer emerged, steaming and still dripping, a pale gray T-shirt clinging damply to his chest and slim waist, a fresh pair of jeans slouching on narrow hips. He scrubbed a towel through his messy wet hair and peeked at Fox from under the tangle of it in that way he had, offering a sheepish smile.

“Sorry,” he said. “Not really up to dress code, but technically I’m not checking in for work just yet.”

“I hardly think you need to worry about work attire in my living room.” Fox pointed his pen at the plush easy chair adjacent to the sofa. “Sit.”

Like an obedient puppy, Summer dropped down into the chair, resting his hands on his knees.

“Thank you for accepting my application.

“Your qualifications met the requirements, and as a former student you’re familiar with the school, the curriculum, and the standards of my classes.” Fox crossed his legs, tapping his pen against his lower lip, studying Summer thoughtfully. “However, I don’t think you’re suited to teach.”

“Wh-what?” Summer’s gaze flew up quickly, then darted away. “Then why did you accept me as your assistant?”

Immediately, Summer bowed his head, staring fixedly at his knees. “Why?”

“Does it matter?” Summer threw back, biting his lip and turning his face to the side.

“It matters.” Fox set his pen, notepad, and atrocious tome aside to lean forward, resting his hands on his knees and lacing his fingers together. The longer he watched Summer, the more uncomfortable the young man seemed to grow, sinking down into his shoulders and curling his fingers slowly until they dug up the denim of his jeans in little divots. “Do you recall why most parents send their sons to Albin Academy, Mr. Hemlock?”

“Because…” Barely a murmur. “Because they’re rich and horrible and don’t want to deal with their problem children themselves, so they ship them off where no one can see them?”

“That is a more crass explanation of our function here, yes,” Fox said dryly. “The point is that these boys have no respect for authority — and while we are not their parents or their disciplinarians, we do at least have to maintain the appropriate seniority and boundaries to keep them out of trouble. They will push those boundaries at every turn, and considering you haven’t changed a bit from when you were a student… I don’t think you’re capable of dealing with that.”

“That’s not fair!” Summer protested. “I’m not a kid anymore. You don’t know me. You’ve spent all of five minutes talking to me.”

“One can generally make an accurate psychological assessment in less.”

“Well, your assessment of me is wrong.” Summer’s jaw tightened. “I can do this job. And since you accepted me, you can at least give me a chance before telling me how much I suck.”

So there was something of a backbone there, Fox thought — and wondered just what it was that had made Summer so shy, so withdrawn. Leaning back, he steepled his fingers. “You interviewed with Principal Chambers, did you not?”

“And what did he tell you?”

“That no one else wanted the job.” Summer smiled faintly. He had a soft, sad mouth that seemed ill-used to smiling, yet was haunted by a perpetual ghost of warmth nonetheless. “And that my mother must be happy to have me back home.”

“I…” There — an almost imperceptible flinch. “She needed me here. She’s not young anymore, and it’ll be better for her if I’m close by to help.”

That, Fox thought, was not an answer. It was a reason, but not an answer to the actual question he had asked. He pressed his lips together, tapping his fingertips to his knuckles.

“I have a proposition for you,” he said. “We can call it a training exercise, or a psychological experiment — whichever suits you.”

“Both, perhaps.” Fox tucked a loose lock of hair behind his ear. Irritating mess; he always meant to cut it, and yet… He let his gaze drift to the mantle. The butsudan resting there, its deep-polished rosewood glinting in the afternoon light drifting through the windows, its doors currently closed and its contents private…as they should be. Tearing his gaze away, he made himself focus on Summer. “Once per day, I expect you to do something outside your comfort zone. Challenge yourself to take on a role as a leader or mentor. Challenge yourself to approach this job with confidence, rather than asking permission to do what you must do. If you cannot learn to be bold, Mr. Hemlock, at the very least learn to fake it in the necessary environments so that your knees knocking together do not drown out the lesson you are trying to deliver.”

Summer’s lips twitched faintly. “Pavlovian conditioning is a little 101 level, sir. Are you trying to make me assert my own authority?”

“I’m not trying to make you do anything,” Fox replied. “My only goal is to see if you can take the steps needed to face down a classroom of unruly, disrespectful children on your own. Do I need to hold your hand in that, or do you feel capable of attempting it under your own impetus?”

Summer plucked at his jeans. “The children don’t scare me.”

No answer. Simply a heavy silence, fraught with meaning, and yet == for all his understanding of psychology, of psychiatry, of the small markers that gave away intent and thought and emotion, Fox couldn’t quite read what that meaning might be. Not when the Summer he had known as a boy was necessarily a stranger to him, with the appropriate distance between teacher and student; not when the Summer he saw now was a new person, shaped by years of experiences Fox as yet had no insight into, and technically stood on almost equal footing as his peer and assistant.

And if he were honest with himself…no matter how he tried, no matter what clinical understanding he possessed…

He somehow always felt at one remove from other people’s feelings, observing them and yet never quite understanding them, the soul of his own emotions locked away.

Summer took a deep, slow breath, his shoulders rising and falling. “Every day? Does that include today?”

“You don’t technically start work until Monday, so you may take the weekend to consider, if you’d like,” Fox said. “Or you may start today. But that is still not an answer as to what frightens you.”

“Okay,” Summer said shakily, rising to his feet with wooden motions. “Okay then. I’ll show you what scares me.”

He stepped rigidly across the living room, navigating the low polished coffee table with an awkward bump of his shins against the wood. Fox watched, brow raised, as Summer drew closer to the couch — but startlement prickled down his arms in a rush like goosebumps and fine hairs raising as Summer bent over him, bracing one hand to the back of the sofa.

Before the young man captured Fox’s chin, his jaw, in roughened fingertips.

Tipped his face up.

Cole McCade is a New Orleans-born Southern boy without the Southern accent, currently residing somewhere in Seattle. He spends his days as a suit-and-tie corporate consultant and business writer, and his nights writing contemporary romance and erotica that flirts with the edge of taboo — when he’s not being tackled by two hyperactive cats.

He also writes genre-bending science fiction and fantasy tinged with a touch of horror and flavored by the influences of his multiethnic, multicultural, multilingual background as Xen. He wavers between calling himself bisexual, calling himself queer, and trying to figure out where “demi” fits into the whole mess—but no matter what word he uses he’s a staunch advocate of LGBTQIA and POC representation and visibility in genre fiction. And while he spends more time than is healthy hiding in his writing cave instead of hanging around social media, you can generally find him in these usual haunts:

Keira Soleore writes for the International Examiner and Cogitations & Meditations. She enjoys connecting with readers on Twitter (@keirasoleore) and through her website (www.keirasoleore.com). Her interests include medieval manuscripts, philosophy, poetry, picture books, choir, sunshine and beaches. Keira is a pseudonym.
All Posts
PrevPreviousLove YA: Top 3 Y.A. Reads for the Week of June 23rd
NextDaily Frolic: The Hamilton Trailer is Here!Next