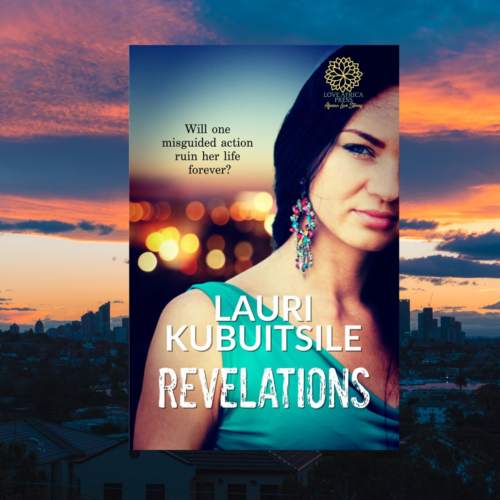 Love Africa Press has another hit on their hands with Revelations by Lauri Kubuitsile. It is a story of a neglected wife in a foreign country, an ambitious man who will do anything for power and greatness, and an embittered husband battling to save more than his marriage.

Feeling isolated, Elizabeth is struggling to find her place in a different country. Her once happy marriage is fading. Her husband, Ditiro, is busy with his successful law practice. Even being a mother does not alleviate her loneliness.

After one challenging morning, Elizabeth picks up a hitchhiker, and completely out of character, she has a brief sexual encounter with the much younger man, Tumelo — a rash decision that will change her life completely. Tumelo, a pathologically ambitious man, will use Elizabeth as a stepping-stone on his way to the fame he thinks he deserves.

Ditiro is broken-hearted by Elizabeth’s affair and kicks her out of their home and family life. But when she becomes the target of a psychopath’s quest for power, he puts aside his hurt to protect her. However, forgiving Elizabeth and letting her back into his heart may be beyond him.

She thought about the scarf in the dust bin. She wondered how Tumelo got into the yard without their golden lab, Shumba, barking. Then she remembered they’d had Shumba in the house the night before for a few hours before Lorato had gone to bed. Tumelo must have put the scarf in the bushes then.

Was he watching them? Waiting for a chance to make a move? A chill ran through her at the thought. She knew him better now and knew he could do it. He could watch her every night out in the darkness, waiting for his chance. Nights and nights of sitting in the cold. One thing Tumelo had was a close-minded allegiance to a cause. She’d learned that about him since that night in Francistown two months before. She was his current cause, and he was not going to be easily swayed away from her.

In the house, Precious was at the sink finishing breakfast dishes.

“I think I’ll do some work in my studio before heading to the gallery,” Elizabeth said.

Elizabeth had asked her not to call her madam, but Precious couldn’t seem to get herself to call her employer by her first name, so she had given up on it.

In her studio, she closed the door and dialed Tumelo’s number. He answered on the second ring.

“I put it in the dust bin, you fucker! Are you spying on me? Are you watching this house? I swear to God if you do anything…if you touch my daughter…or any of us, I will kill you,” she hissed into the phone so Precious wouldn’t hear.

“Chill, Lizzie-baby, I’m not into hurting anyone. I was just leaving you a present. A present only. I searched all over for the right color. Cerulean is a tough color to find in Gabs. Why don’t we meet up today? I have a bit of free time in the afternoon.”

He was impervious to her words, oblivious to the situation. No matter how many times she said no, he would not hear it.

“I told you it’s over. Why can’t you just fucking leave me alone?”

She’d been telling him this for two months nearly every day. He just couldn’t get it.

She’d been living with the guilt and constant vigilance for only two months? She found that hard to believe. She was achingly tired from the constant stress of it.

“And don’t call me Lizzie. I told you my name is Elizabeth.”

He laughed. “But you like it when your hubby, Rre Molosiwa, calls you Lizzie. I thought I’d give it a try.”

How did he know that? Where was he getting this information from? Was he following Ditiro, too?

“Don’t ever call me that again. Stop phoning me, or I’ll…” She struggled. She knew she was impotent. There was nothing she could do. Everywhere she turned was the chance of her adultery being revealed. She had no power to stop him. She couldn’t tell anyone without her secret being exposed. She was trapped.

“You’ll do what? Call the police? How about tell the President?” He laughed at her. “Bet it won’t take long for it to get back to your dear Ditiro then. I wonder what he would think knowing his wife sucked my cock along the A1. She pulled off the road to give a useless young man like me a blow job. How do you think he’d take that information, Lizzie?”

She could see his arrogant smiling face through the phone.

“What do you want, Tumelo? Is it money? I could give you money if you’d just leave me alone.” She sat at her desk, holding her head in her hand, weak from the struggle of it. She couldn’t take it anymore. She wanted out.

“I don’t want your money, Lizzie. Let’s meet up. Just a few hours. So you can get a bit of relief. You know you like what I can do for you, baby.”

She hung up. She knew she shouldn’t talk to him. It was no use. She wondered why he never thought to blackmail her. She remembered his dream of wanting to stay in hotels. That would have helped him achieve it, at least for a while. But a payoff didn’t seem to be enough for Tumelo. He wanted more. 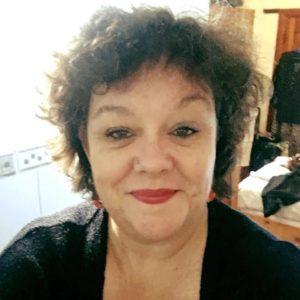 Lauri Kubuitsile is a two time winner of The Golden Baobab Prize for children’s writing; the winner of the Botswana Ministry of Youth, Sport and Culture’s Botswerere Prize for Creative Writing; and a finalist for the 2011 Caine Prize, among others. She has more than thirty books published both here and overseas with publishers such as Macmillan, Oxford University Press, Cambridge University Press and Penguin. Her books are prescribed reading in schools in Botswana and South Africa.

Her historical novel, The Scattering (Penguin SA, May 2016), won Best International Fiction Book 2017 at the Sharjah International Book Fair in the United Arab Emirates and was recommended by the prestigious Walter Scott Prize for Historical Fiction in the United Kingdom the same year. The North American rights have been bought and the book is now published in the USA and Canada by Waveland Press (USA). Her second historical novel, But Deliver Us from Evil (Penguin SA), was published in 2019.

Where to Find Lauri

As an Amazon Associate, we wean from qualifying purchases.

Keira Soleore writes for the International Examiner and Cogitations & Meditations. She enjoys connecting with readers on Twitter (@keirasoleore) and through her website (www.keirasoleore.com). Her interests include medieval manuscripts, philosophy, poetry, picture books, choir, sunshine and beaches. Keira is a pseudonym.
All Posts
PrevPreviousEvery Music Lover Needs These
NextDaily Frolic: Anna and Kristoff’s WeddingNext