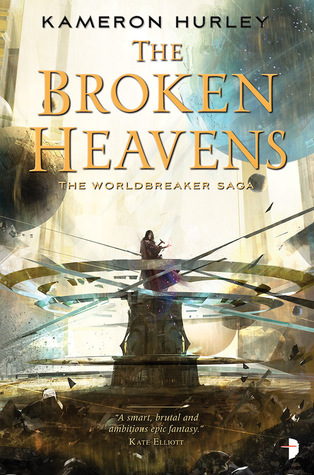 [Note from Frolic: We’re so excited to being you this exclusive excerpt from Kameron Hurley’s The Broken Heavens, out today!]

About The Broken Heavens:

The Dhai nation has broken apart under the onslaught of the Tai Kao, invaders from a parallel world. With the Dhai in retreat, Kirana, leader of the Tai Kao, establishes a base in Oma’s temple and instructs her astrologers to discover how they can use the ancient holy place to close the way between worlds. With all the connected worlds ravaged by war and Oma failing, only one world can survive. Who will be sacrificed, and what will the desperate people of these worlds do to protect themselves?

Kirana Javia Garika, Kai of the Tai Mora, Empress of the Known Worlds, and Founder of Novoso Mora had won her decade-long campaign to overtake the mirrored land and bring all but a fraction of her people to safety. She was the most feared sentient being across dozens of worlds.

She had expected that rising to such prominence would make her more cheerful. Instead, it left her anxious and irritable, plagued by dreams of burning worlds that tore away from the blank black canvas of the universe like charred paper, revealing her wife’s face, a face whose flesh bubbled and sloughed away, ruined by the force of a searing volcanic wind billowing from an amber sky.

She shivered now under the double helix of the suns, which sat directly overhead. Kirana squinted and raised her hand to her eyes, peering at the great shivering mass her jistas had raised from the bottom of the ocean just off the northeastern coast of what had once been Dhai.

She stood on a narrow sandbar, five hundred paces from the proper shoreline, joined by one of her stargazing omajistas, Suari, and Madah, her intelligence officer. She had tried to keep the number of people who knew about this operation limited, but there were spies in her temples.

Every month her intelligence forces found another traitor and made an example by hanging their bodies up on the harbor gates for all to see. But it had done no good. It wasn’t only captive Dhai and Dorinah who had turned on her, which made it worse. The hungrier her people became, the crueler the choices they had to make here, the more her own people sided with those they had conquered. It was the very worst betrayal, to have saved them all from annihilation only to lose their loyalty in the aftermath.

Cold, briny wind buffeted the sandbar, nearly taking Madah, the slightest of them, off her feet. Madah staggered and found her footing, bracing herself by digging her heel into the sandbar. Two scholars and another stargazer huddled nearby, just to the left of the wink that Suari had opened to bring them all here from Oma’s temple.

It had been several days since they dredged the thing onto the sandbar, and Kirana was still not used to the sight of it. What had once presumably been a true temple with stone facades and sweeping arches and domes, tamed into being by generations of Dhai jistas, had shed its non-organic trappings, laying bare what she could only call the monstrous pulsing heart of some mythical beast. Like a living leviathan dragged from the deep, the mass of it towered over them, waves breaking around its gooey, barnacled base. The great beast was bound in large, tirajista-trained vines that served as scaffolding for a dozen or more soldiers and tirajistas who worked along the skin of the pulsing mass, seeking an entrance. They had been at it nearly three days, and Kirana had yet to see any progress.

“You’ve yet to convince me this isn’t a sea creature,” Kirana said, raising her voice above the wind.

“Even a sea creature would have an orifice,” Madah said, hugging her arms to her chest. She wore a heavy bearskin coat, and sea foam collected around her slender ankles. “Maybe it’s some embryo, going to hatch a beast.”

“Five temples,” Suari said quickly, consulting a parchment containing diagrams he had laboriously traced from the book they still called The Saiduan Tome because they had yet to decipher its actual title – or anything else written in it. The little Saiduan ataisa who had washed up with it had remained close-lipped about its origin and contents, despite the most persuasive efforts of Kirana’s interrogators.

The wind caught at the edge of the paper, nearly tearing it in two. Suari clutched it to his chest, frantically rolling it back under his robe. “The symbols on the map in the Assembly Chamber match the locations of each temple. The trefoil with the tail marked this spot. This has to be the primary engine. The one where the power of the satellites is concentrated, the one a worldbreaker can use to manipulate the heavens. We are still working out the precise language in the book, of course, but the symbolism is clear. This temple, on the original map in the book, is sitting on a whole continent, in precisely this location, relative to the rest.”

Kirana waved at him. “Yes, I’ve heard this,” she said. “Logically you’re correct, but look at the fucking thing.”

“I understand,” Suari said. “I’m sure once we’re inside–”

“And when will that be?” Kirana asked.

“I’m afraid, I still… we still have no timeline, I mean, unless you, Madah–”

“Don’t dump this on me,” Madah said. She turned to Kirana. “We got it up from the bottom. Suari and his scholars said they’d know what to do with it after that. This has got to be it, because there’s nothing else down there.”

“Precisely,” Suari said, as if she had said something particularly insightful.

Not for the first time, Kirana wished she had left him behind, and raised up some other omajista with the knowledge necessary to navigate this moment. Too late to start over, alas.

Kameron Hurley is an award-winning author, advertising copywriter and online scribe. She has won the Hugo Award, Kitschy Award, and Sydney J Bounds Award for Best Newcomer and was a finalist for the Arthur C Clarke Award, Nebula Award, Locus Award, BFS Award, the David Gemmell Morningstar Award, and the BSFA Award for Best Novel. Her non-fiction has been featured in The Atlantic, Locus, and the game-changing collection The Geek Feminist Revolution.

Where Romance and Pop Culture Live Happily Ever After.
All Posts
PrevPreviousWhat Fantasy Means to the Rest of Us by Tara Sim
NextTrope Rec Tuesday: The Doctor Romance Books of Your DreamsNext