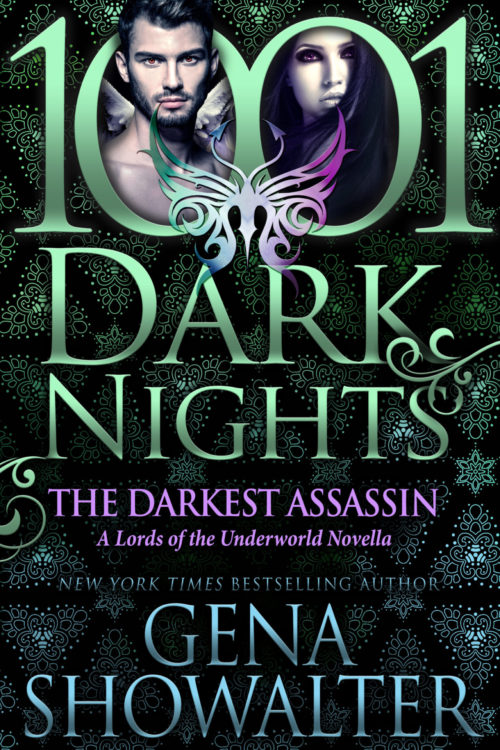 We are so excited to bring you this exclusive excerpt of The Darkest Assassin by Gena Showalter! This dark, sexy novella is out now!

About The Darkest Assassin:

What happens when a ruthless winged warrior falls in love with the demon-possessed beauty he’s been ordered to kill?

Fox is a demon-possessed immortal with many talents.

Power to kill the most dangerous Sent Ones—check.

Scare away any man who might want to date her—mate.

Now, the keeper of Distrust has been marked for death, a winged assassin with rainbow-colored eyes tracking her every move, determined to avenge the males she accidentally decimated. If only she could control the desire to rip off his clothes…

Bjorn is a fierce warrior with many complications.

Tragic, torture-filled past—check
A wife he was forced to wed, who is draining his life force—check

Ever-intensifying desire for the enigmatic Fox—mate

Never has he hesitated to exterminate an evil being. Until now. The sharp-tongued female with a shockingly vulnerable heart tempts him in ways no one else ever has, threatening his iron control.

But, as Fate itself seems to conspire against the unlikely pair, both old and new enemies emerge. And Fox and Bjorn must fight to survive.
And learn to love… 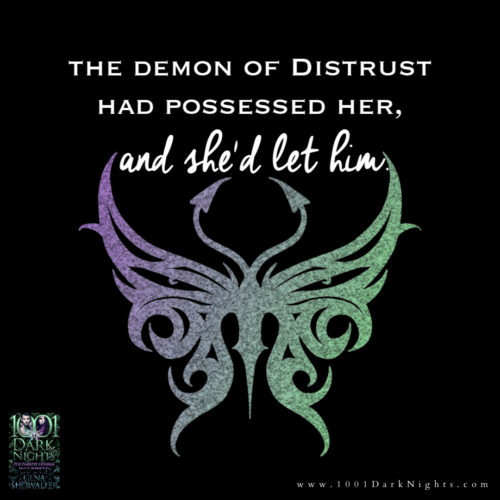 He quickened his steps, the tips of his wings collecting soot from the ground.  Once he finished with Alana, he must deal with Fox once and for all.

Fox… Anticipation fizzed in his veins.  He couldn’t wait to breathe in her lusciously sweet fragrance, feel the sublime heat of her body, or gaze upon those arresting features.  He even enjoyed conversing with her; the woman wielded a ready wit he found appealing. She also displayed a talent for masking her emotions, making him frantic to dig deep and discover the truth beneath the unconcerned veneer.

The fact that he’d hardened while speaking with the murderess didn’t matter.  His dick ached for the challenge she presented, but his mind had not—did not—and never would.

A foul taste coated his tongue, and he scowled.  The bite of a lie. Had he just told himself an untruth?  Possibly. Fine, definitely. Fox’s standoffishness was so different from Alana’s clinginess, of course he liked it.

Careful.  Alana, Queen of Shadows, always sensed when Bjorn considered someone attractive…and mutilated their face.  She believed she owned him, spirit, soul and body. In her mind, no one else should play with her toy, even though said toy did nothing to encourage her advances.  Actually, he did the opposite. Anytime she’d invited him into her bed, he’d declined. Bjorn refused to pretend to crave someone he despised.

To his delight, each rejection had infuriated and embarrassed her.  Eventually, she’d stopped asking.

An agonized scream echoed through the cavern, jolting Bjorn from his dark musings.  He pressed his tongue to the roof of his mouth, irritated. Distraction was the number one killer of warriors.

Again, he quickened his pace.  When he reached the end of the darkened corridor, he paused to blank his features and raised his chin.  Then, he entered Alana’s throne room. Ice-cold air enveloped him, breath misting in front of his face to create a dream-like veneer.  Or a living nightmare. Different colored crystals dripped from the ceiling and glittered in the torchlight. Well, well. These torches hung from pikes, not people.  Relief rained over him.

An army of Shadows lined the limestone walls.  Surrounding the royal dais, a cenote filled with something akin to motor oil.  And in the center of the platform, a throne of black mist.

Alana perched on it, her back ramrod straight and legs crossed.  Impatient, she drummed her long, pointy nails against the chair arms.

She’d anchored her mass of silvery-white hair around a jagged ruby crown and changed into a more revealing scarf-dress the same shade as the rubies.  A bejeweled ring adorned each of her fingers, and strings of diamonds ran down both of her legs, creating a skirt-like effect. Anytime she moved, the strands parted, showcasing more skin.  On her feet, a pair of diamond slippers.

Beautiful on the outside, a hideous monster on the inside.

Gena Showalter is the New York Times and USA TODAY bestselling author of the spellbinding Lords of the Underworld series, two young adult series–Everlife and the White Rabbit Chronicles–and the highly addictive Original Heartbreakers series. In addition to being a National Reader’s Choice and two time RITA nominee, her romance novels have appeared in Cosmopolitan and Seventeen magazine, she’s been mentioned in Orange is the New Black–if you ask her about it, she’ll talk for hours–and her books have been translated in multiple languages. She’s hard at work on her next novel, a tale featuring an alpha male with a dark side and the strong woman who brings him to his knees. You can learn more about Gena, her menagerie of rescue dogs, and all her upcoming books at genashowalter.com

Where Romance and Pop Culture Live Happily Ever After.
All Posts
PrevPreviousDaily Frolic: The Marvelous Mrs. Maisel is Getting a Season Four!
NextSeasoned Romance On My Radar: December 2019Next