Frolic-Exclusive Excerpt: The Story of Us by Teri Wilson 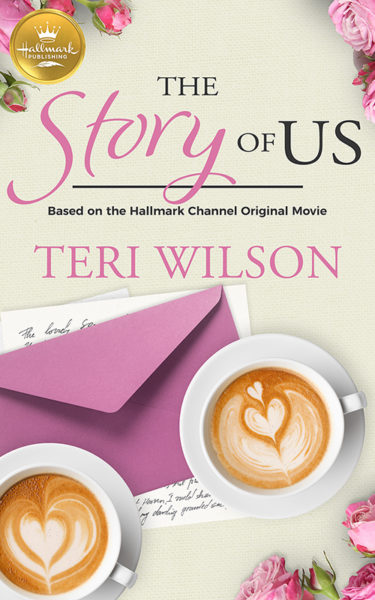 About The Story of Us:

Jamie always adored True Love Bookstore and Café, and now she’s the owner. But businesses are struggling in her small town, and her beloved store is threatened by a new retail development scheme.

Sawyer, Jamie’s former high school sweetheart, startles her when he comes to town for the first time in fifteen years. She soon learns he’s the architect of the proposed development and he’s there to sell local business owners on his plan. Sawyer had no idea that Jamie had bought the bookstore and poured everything she had into it. If he takes it over, he’ll break her heart a second time.

Jamie’s discovery of a box of old love letters and valentines might hold the key to saving her shop. And after all this time, could love be in the cards for Jamie and Sawyer, too?

Out of pure instinct, Sawyer O’Dell reached up and caught a falling book before it hit him in the head. But it must have still knocked something loose inside him because when he glanced up, he was transfixed by the sight of a woman perched atop a rolling ladder staring down at him, wide- eyed.

Not just any woman, but her—Jamie Vaughn, his high school sweetheart.

“Good catch,” she said with an unmistakable hint of wonder in her tone.

Sawyer would know that voice anywhere. He wasn’t dreaming, was he? It was really Jamie.

He’d never experienced such a loss for words before, so he said the first thing that popped into his head. And since he’d unexpectedly found himself staring into the eyes of the girl who loved books more than anyone he’d ever met, those words happened to be borrowed from William Shakespeare.

“‘But, soft! What light through yonder window breaks?’”

“What?” She blinked, and he was suddenly acutely aware that Jamie wasn’t a high school girl anymore. Her adorably awkward teenaged frame had been replaced with willowy grace. Sawyer’s favorite bookworm had grown into a beautiful woman while he’d been away.

His heart thumped hard in his chest. “It’s Romeo and Juliet. You, uh, look like you’re up on a balcony.”

She didn’t move. She just kept standing up there in her prim black cardigan and polka dot pencil skirt, staring down at him as if he’d arrived via time machine. It sort of felt like he had.

“There was no balcony,” she said.

Sawyer tightened his grip on the book in his hands. Why was he sweating all of a sudden? “What?”

“In the story. She’s just standing at a window. Everybody gets it wrong.”

Sawyer knew better than to argue. Still, this unexpected little reunion wasn’t progressing at all the way he’d always imagined it would. Not that he’d been planning, or even hoping, to see her while he was back in Waterford. The last he’d heard, she was thinking about moving to Texas. But he’d be a liar if he said bumping into her hadn’t crossed his mind over the years. He’d just never considered he might botch Shakespeare when it finally happened.

“I’m sorry. Um. I’m just…” She deposited her armload of books onto the top shelf and climbed down the ladder so they stood face-to-face. “Completely thrown.”

Had her eyes always been such a startling shade of blue?

“Yeah, so was I. I suppose I shouldn’t be. This was always your favorite place.” He couldn’t believe she still worked at True Love Books, though. How was it possible that everything in Waterford had changed and yet somehow, stayed exactly the same?

“Let’s start again.” She smoothed down her dotted skirt, and Sawyer couldn’t help but smile because polka dots had always been her trademark. “Hi, Sawyer!”

“Hey, Jamie.” He was beginning to feel like a kid again, walking his girl to work after school. “You dropped this.”

He offered her the book that had nearly fallen on his head.

She took it, and her grin wobbled just a little. If he’d blinked, he would have missed it entirely.

“Thank you.” She stared for a beat at the illustrated cover of the book’s blue dust jacket.

It was only then that Sawyer noticed which flying novel he’d managed to narrowly avoid—Persuasion by Jane Austen. Oh, the irony.

Teri Wilson is a Publishers Weekly bestselling author of romance, women’s fiction and romantic comedy. Three of Teri’s books have been adapted into Hallmark Channel Original Movies by Crown Media, including Unleashing Mr. Darcy (plus its sequel Marrying Mr. Darcy), The Art of Us and Northern Lights of Christmas, based on her book Sleigh Bell Sweethearts. She is also a recipient of the prestigious RITA Award for excellence in romantic fiction for her novel The Bachelor’s Baby Surprise. Teri has a major weakness for cute animals, pretty dresses and Audrey Hepburn films, and she loves following the British royal family.

1 thought on “Frolic-Exclusive Excerpt: The Story of Us by Teri Wilson”