Frolic Gets Fast and Furious (Part 1) 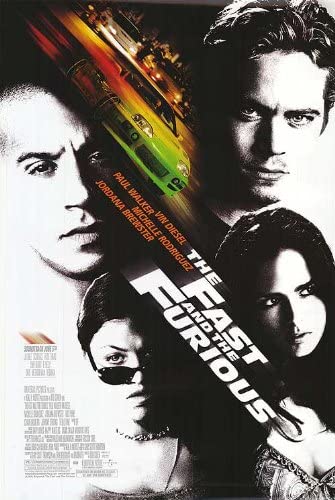 Many of my friends and folks on the internet are making the most of things during this unusual time of staying inside as much as humanly possible. From knitting projects to brushing up foreign language skills to finally writing that novel, many people are using this time to meet new goals.

I, too, had an idea for a goal that I wished to check off while I spent my days at home: I wanted to finally watch the entire Fast and the Furious franchise to see what all the fuss is about.

I first pitched this idea almost a year ago as a fun experiment leading up to the release of the Fast and the Furious in-universe tie-in movie Hobbs and Shaw. Alas, life got in the way.

Now, however, there is no excuse. I had a destiny to fulfill from the comfort of my couch. I’ve pledged to watch all eight Fast and the Furious movies in eight days!

So, without further ado, please enjoy the first installment of my Fast and the Furious recaps.

What Did I Expect?: The cars would be fast. The people would be furious.

Favorite Part: Vin Diesel’s shaking, rage-filled face when he learns Paul Walker’s character is a cop is PRICELESS. He is the embodiment of the titular furiousness, and I loved every second of it.

Least Favorite Part: This movie is almost twenty years old, so there are some things that definitely don’t age well when we watch today. Specifically, there’s a casually-dropped F-Slur, which really hits hard.

A Brief Summary of My Experience: The bass-heavy opening credits made me look over to my husband and say, “Yes, I have made a very good choice.” I now realize I should have been much more prepared to enjoy this movie, because Mad Max: Fury Road is one of my top five movies of all time, and I really liked the musical car chases of Edgar Wright’s Baby Driver!

A few things definitely took me by surprise. First, I made a note that, “I was not at all prepared for the racial tensions and dynamics of this film.” The different groups of racers are mostly segregated by racial and cultural backgrounds, and the film unsubtly calls the big showdown in the desert “Race Wars.”

The sort-of-cliffhanger and action of The Fast and the Furious made me actively excited to watch more. Overall, it succeeded in setting up the wildly successful franchise! 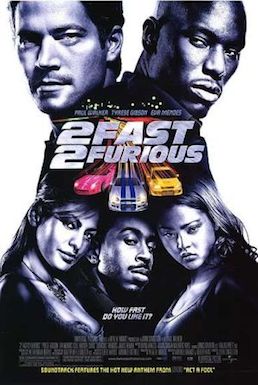 What Did I Expect? The cars would be fast. The people would be furious.

Favorite Part: The major bait-and-switch of a ZILLION fast cars coming out to confuse the police managed to surprise me and make me cheer out loud. It’s such a silly gimmick that somehow manages to work.

Least Favorite Part: For reasons that are hard to explain, the objectification of women in this movie bothered me MORE than the first movie. There was also a scene with a rat that was just too much for me.

A Brief Summary of My Experience: This movie wasn’t quite as charming as the first, but still had enough fun with the vroom vroom cars to keep me entertained.

Hilariously, my husband checked IMDB half way through the movie and looked at me, appalled. “Guess who isn’t in this movie?!”   That’s right, hubs. We’re going to have to wait a while to see Vin Diesel as Dom again!

I couldn’t stop thinking about the relationship between Brian and Roman. Specifically, all their close-talking, one-upmanship and gentle ribbing gave me a bit of a Top Gun vibe. Which is to say…I wonder if the directors of the early Fast and Furious installments understood how easily hyper-masculinity could veer into homoeroticism.

Some more of my notes from the process include the following observations:

-“Guns, murderers and crooked cops? I was made for this!” –The tagline of this movie, as spoken by Roman

My Final Rating: 6/10 Sukis, who I wish had more screen time in this movie. 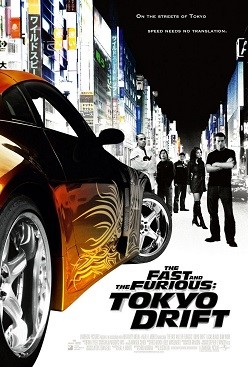 What Did I Expect? The cars would be fast. The people would be furious. Oh, and it would take place in Tokyo!

My Favorite Part: There’s a part when a bunch of cars are drifting up a winding hill at night, and I took the note, “I do like watching them drift in some of the calmer scenes. It’s relaxing like watching sand-cutting videos on Instagram.” I also loved the very end when (spoiler alert?) OUR MAN DOM SHOWS UP!

My Least Favorite Part: Once again, misogyny is par for the course in a frustrating way. Specifically, though, I would like to focus on how hard it was to get on board with our hero, Sean. He made numerous terrible decisions, only thought about himself, and had all the “bad boy” vibes with absolutely none of the charming or redeeming qualities that make people fall for bad boys.

A Brief Summary of My Experience:

“This is more like Fast and the Furious: Toxic Masculinity Drift,” my husband said during a particularly bro-y moment between Sean and the film’s antagonist, D.K.

Reader, I am so mad I didn’t come up with that phrase first, because it’s pretty spot-on for how it felt to watch this movie. Since the hero was so hard to root for, it made the whole movie feel flatter and less zippy than the first two installments.

At the risk of sounding bonkers because I am not nor have I ever been a “car person,” … for some reason, I didn’t feel the connection between the drivers and their cars that existed in the first two installments. And I missed that!

Finally: there was, at one point, a shot of wild-looking motorcycles with NOS tanks attached. I could not wait to see those in action. AND THEN THEY NEVER SHOWED UP IN A RACING SCENE! 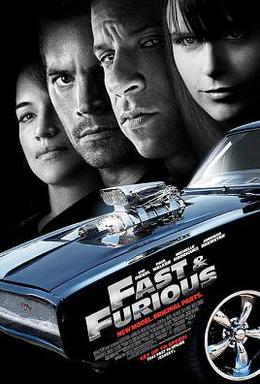 What Did I Expect? The cars would be fast. The people would be furious. And the gang from movie one would be back together!

My Favorite Part: There’s a lot to like in this installment, but I’d have to go with the obvious: the climactic race across the dessert and through some underground tunnels was fabulous.

My Least Favorite Part: I’m getting just a bit tired of the formula where the cops undermine whatever mission they’ve sent Brian on. I need a new way for things to go wrong or subvert the plot in the next couple movies!

A Brief Summary of My Experience:

This is the perfect movie to end this article on, because I believe it truly marks a transition in Fast and Furious film history. Under the direction of Justin Lin, we’re fully transitioning from the early 2000’s frat boy aesthetic into the zippy, zany, death-defying motor acrobatics that have come to define this series.

It’s not enough for the cars to be fast, anymore. Oh, no. Now the fast cars are exploding, careening through underground tunnels, and zooming toward flaming gasoline-filled trucks in order to make bold escapes.

One gripe came from my husband: We agree that Paul Walker looks much more mature and attractive by modern standards than he did in the first movie…but at one point my husband hilariously yelled out, “Do the costume designers hate Paul Walker?! They have him in the ugliest baggy jeans right now!”

That does it for my first installment of getting Fast and Furious with Frolic! Come back soon to see how I react to the second half of the franchise. Are you a fan of these movies? Are you like me, and you’ve never checked out the series (until now!)? Let us know what you think in the comments or at @onfrolic !

Erin Phelps is a lover of swoony romance novels, superb television and movies, and splendid comedic podcasts! In addition to writing for Frolic, Erin works at a fun customer service-oriented job at a salon. Sometimes, she can even be found teaching Women’s and Gender Studies at her local college! Her love language is well-constructed pop culture references and her favorite treat is a caramel latte.
All Posts
PrevPreviousWhy Gilbert Blythe Remains My Ultimate Book Boyfriend
NextDelectable, Dark YA FantasyNext