Gamble on This Excerpt from Exquisitely Yours by M. Jay Granberry! 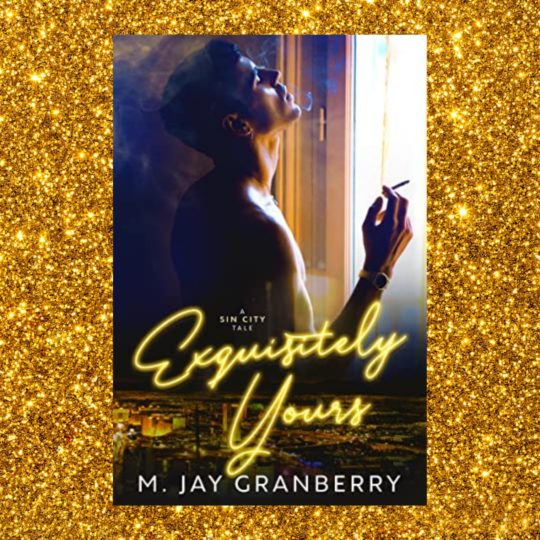 We are so excited to bring you this exclusive excerpt from Exquisitely Yours by M. Jay Granberry! 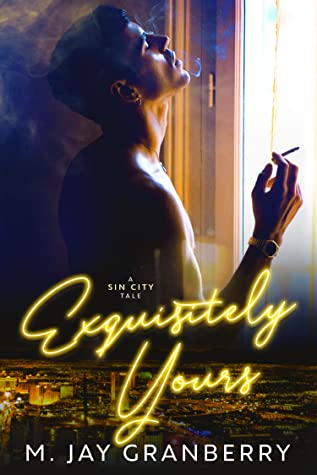 What happens in Vegas…

Daniel Xu doesn’t take anything too seriously, not himself, the career that has given him fame and fortune, or the neverending string of women that fill his bed. But life has a way of turning on a dime. When the party’s over, all the jokes are told, and one beautiful face blurs with the next beautiful body. Reality leaves him underwhelmed and empty.

Enter Jessica Johnson, a sexy complication too intelligent to ignore and too untouchable to keep.

I make another sweep of my reflection in the mirror, and quickly apply some much-needed gloss.

“There. That’s better,” Not six am fresh with bright eyes and a bushy tail, but my lips are moisturized, ponytail is smooth, and after a tug on my coat sleeves I feel more in control of my spiraling emotions as I exit.

And walk into Daniel exiting the men’s room. “Sorry.”

“My bad.” He says at the same time a solid arm wraps around my waist pulling me into his hard body. “We’ve gotta stop meeting like this,” he laughs but he doesn’t try to let me go, and I don’t move either

Behind Daniel the terminal is all bright lights, gleaming metal surfaces, and LED signs advertising the excursions available to vacationing tourists.

The light in the hallway is dim by comparison, oddly quiet and intimate for an airport.

In the close quarters I can see the multitude of whiskers that make up his five o’clock shadow, the eyes that aren’t exactly brown but a brilliant copper, vibrant with life and curiosity. A chunk of dark hair falls forward and with it comes the scent of apple shampoo which transports me back to a night that seems more fantasy than reality now.

“I–I’m sorry.” I say again because I don’t have other words, but I need to say something.

“Jessie,” he chuckles. “It’s no big deal. Nothing broken or damaged. At least nothing that wasn’t damaged before. I’m good. What about you?” One inky brow rises in a perfect arch as his gaze sweeps down my body.

“Yeah…I’m… I mean yes. Nothing is broken here either.”

“Good deal.” He drops the arm around my waist taking a step back, and I weave a little at the loss of heat and strength. Daniel starts walking toward the terminal and I call, “Hey, Daniel.”

He stops and turns looking at me over his shoulder. “What’s up?”

I don’t want it to be like this between us, stilted, chilly. “Can we start over?” I feel the heat of an embarrassed flush creeping up my neck to stain my cheeks. “I mean it’s inevitable that we’re going to be around each other, especially this weekend. I don’t want it to be an awkward thing, you know?”

Daniel does a one-eighty turning to fully face me.

“Yeah, I do.” He says walking forward to stop less than a foot away.

We study each other in silence and the tension mounts, breaking when one of us starts laughing. I’m not sure if he started it or if I did, but the air clears, and I breathe a little easier.

Sobering I extend my hand. “Jessica Johnson. Sister of the groom.”

His warm hand clasps mine “Nice to meet you Jessie J. I’m Daniel Xu, a best friend to the bride, drummer in her band…” His hand squeezes mine and he leans forward seductively whispering in my ear, “and the best damn fuck you’ll ever have, if you give me half a shot.”

I open my mouth to respond but the words get stuck, behind shock and–and outrage. “Who says that?” I mean in real life. Not the rock star reality where he resides.

“What kind of men have you been around that they don’t?” He asks tilting his head to the side like he’s trying to comprehend a world where humans interact with manners and decorum.

“The civilized ones.” I quip immediately.

“Is that right.” He chuckles. “And I take it from your tone, you think I’m not civil?”

“I don’t know. Are you?” It comes out as more of a challenge than a question.

“I am. If I wasn’t, I wouldn’t have stopped when I had you primed and ready on my buddy’s sofa.”  He stresses the words sending warm mint scented breath cascading over my ear. “If I wasn’t at least semi-trained and courteous, I’d have already marched you back into the restroom, peeled you out of this preposterous suit, and dropped to my knees to acquaint myself with your taste, and smell. If I gave into my caveman impulse, I’d send you back out there to ol’ Terry soaking wet and well used and still feeling me while he politely asks to wheel your luggage.”

Where Romance and Pop Culture Live Happily Ever After.
All Posts
PrevPreviousFive Things You Didn’t Know About Hollywood by Meg Tilly
NextWeekend Podcast Guide: Video Games and More!Next