Go Hollywood with this Excerpt from Plot Twist by Bethany Turner

We are so excited to bring you this exclusive excerpt from Plot Twist by Bethany Turner! 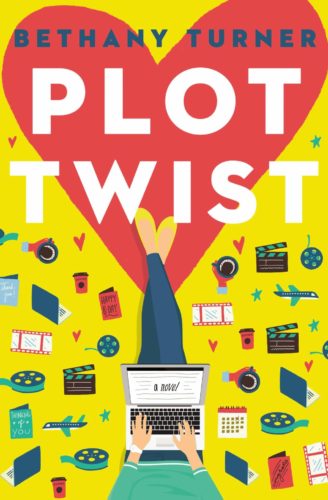 An aspiring screenwriter has a chance encounter with an actor who could be the man of her dreams. Over the next ten years, she’ll write the story . . . but will he end up being the star?

February 4, 2003, promises to be a typical day for Olivia Ross—a greeting card writer whose passion project is a screenplay of her own. But after she and a handsome actor have a magical meet-cute in a coffee shop, they make a spontaneous pact: in ten years, after they’ve found the success they’re just sure they’re going to achieve, they’ll return to the coffeehouse to partner up and make a film together. The only problem? Olivia neglected to get the stranger’s name. But she doesn’t forget his face—or the date.

Every February 4 for the next ten years, Olivia has a day full of coincidences and ironies. As men come and go and return to her life, she continues to write, but still wonders about the guy from the coffee shop—the nameless actor she’s almost certain has turned out to be Hamish MacDougal, now a famous A-lister and Hollywood leading man.

But a lot can happen in ten years, and while waiting for the curtain to rise on her fate, the true story of Olivia’s life is being written—and if she’s not careful, she’ll completely miss the real-life romantic comedy playing out right before her eyes.

I went to see Magnum Opus Phantasm, the movie version, on February 3, 2005. Fi made me go. I hated musicals, but she loved them. I mean, I suppose I didn’t hate all musicals, but the ones I liked were a little more obscure, and usually off-Broadway. They usually didn’t get big-screen adaptations. Fi, on the other hand, was a mainstream Broadway purist. Everything from West Side Story to Miss Saigon to Wicked . . . the bigger, the better. Magnum Opus Phantasm was right up her alley.

When Fi was a little girl, her family would fly from Boston to New York to see Broadway shows all the time. Just for the day, or the weekend. They took me with them on a few occasions, and usually I was miserable the entire time. At least while the show was going. I did, however, love New York. I loved the food, the skyscrapers, the people. I had a fascination with the subway, despite the fact that the Mitchells were not subway people. I would stare longingly each time we passed a station entrance, and I would watch the people going down the steps and coming up. I loved watching the people. You saw every type of person when you spent a weekend in New York. And there were a few places—probably lots of places, but I only knew of a few—where you could hear the subway beneath you as you walked. There, near Central Park, people could hear, if only they would listen. I thought that was magical.

But the shows? Not my thing. I thought Cats was the worst. I’d thought the title was a metaphor—for what, I didn’t know—so when I saw the show was actually made up of a bunch of cats singing, dancing, and playing in garbage, I was disappointed beyond measure. Fiona’s mother thought I was an ingrate for liking the prostitute cat, Grizabella, while Mr. Mitchell insisted I was mistaken. She couldn’t have been a prostitute, he believed. They wouldn’t have put that in a family-friendly musical. Fi and I giggled about it when they weren’t around and wondered what show they had been watching. For years after that, whenever Mr. and Mrs. Mitchell were oblivious to whatever scheme or machinations Fiona and I were concocting right under their noses, we would call it Grizabellaing.

Anyway, all of that is to say Fi dragged me to Magnum Opus Phantasm kicking and screaming. I knew I would hate it. Yes, it was based on a classic piece of French literature, and yes, in some ways the singing made sense, seeing as it took place in the context of an opera house and all. Still, I remained convinced that whatever virtue it possessed would be beaten out of it in its Hollywood adaptation, brought to you by the same team who produced Coyote Ugly.

“But the Phantasm is just your type of guy, Liv,” Fi declared, continuing our argument as we took our seats, popcorn in hand. “He’s melodramatic and brooding, and oh so serious. He’ll never go for the easy laugh or the appealing turn of phrase, that one. You may be in for a treat. I have a sneaking suspicion you’re really going to love this one.”

I didn’t. As expected, I hated it. I actually dozed off a couple of times. But whenever the Phantasm himself was onscreen, I was somewhat mesmerized. Not in an attraction sort of way, and certainly not in an I’m-enjoying-this-movie sort of way, but in a “Where have I seen that guy?” sort of way. Also, perhaps, in a the-people-who-made-this-movie-should-be-exiled-to-a-leper-colony sort of way.

“Who plays the Phantasm?” I leaned over and whispered as a scene at a masquerade ball droned on and on.

Never heard of him. “What’s he been in, besides this?”

Fi turned to me and whispered through gritted teeth, “Shut up. You’re ruining the magic!”

For me, the magic was that it finally ended.

The story continues in Plot Twist by Bethany Turner.

Bethany Turner has been writing since the second grade, when she won her first writing award for explaining why, if she could have lunch with any person throughout history, she would choose John Stamos. She stands by this decision. Bethany now writes pop culture-infused rom-coms for a new generation of readers who crave fiction that tackles the thorny issues of life with humor and insight. She lives in Southwest Colorado with her husband, whom she met in the nineties in a chat room called Disco Inferno. As sketchy as it sounds, it worked out pretty well in this case, and they are now the proud parents of two teenagers.

Where Romance and Pop Culture Live Happily Ever After.
All Posts
PrevPreviousFavorite YA Book Series that Are Coming to an End in Early 2021
Next10 Historical Series I Would Love to See AdaptedNext