Halloween Rom Com: “The Problem With Love Potions” Part One 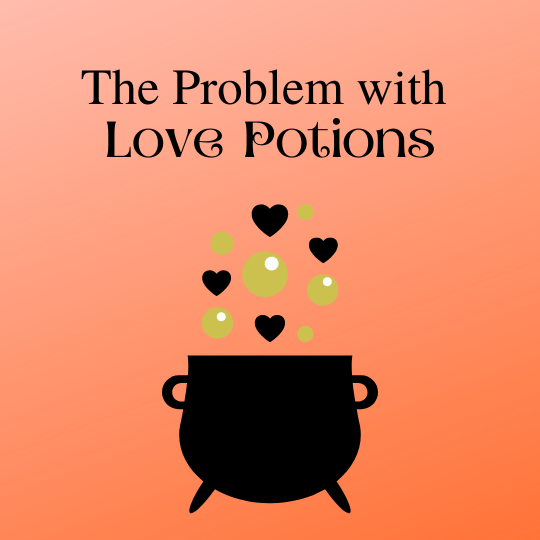 I’m so excited to bring you the first part of my Halloween-inspired romance novella, The Problem with Love Potions!

Check back this week for future installments.

“You’re back after midnight. Again.”

“Which is none of your business. Again.” I unbutton my coat as I walk over to the check-in desk. I reach for the sign-in book, but Aiden yanks it out of my reach. “Do you mind? It’s been a long night.”

“Yeah, I can tell.” Aiden looks me up and down. His eyes linger on the tear in my black skirt. “Why didn’t you patch that up?”

“People were watching.” I don’t add that people were also watching when I ate shit tripping on my way out of the bar. Let him think I was doing something cool, like breaking into a locked construction site or something.

“Yeah, people are also watching when you witch your way into free snacks from the vending machines,” Aiden says.

“Who are you, the snack police?” I ask. I wave my hand, and the sign-up sheet jerks out of his grip and into mine. “Hi, campus security, Ella Mansfield is using magic to get free snacks from the vending machine. How? She’s a witch. How do I know that? I’m a warlock.” I pout as I sign my name and mark the time—one o’clock in the morning. “Good luck with that.”

“I don’t need to tell campus security when I have your mother on speed dial.” Aiden raises his eyebrows. They nearly disappear into the hair that flops over his forehead.

Aiden sighs. “Look, Ella, this is getting out of hand. First the snacks, then the fire alarms. I mean, what are you even doing casting fire spells at four o’clock in the morning?”

I bite the inside of my cheek. I’m not doing any casting at four o’clock in the morning. Not consciously, anyways. When I’m sleeping, sometimes things just…happen. I can’t ever admit that to Aiden, though—ever since we were kids, he’s had a perfect handle on magic. I can’t have him thinking he’s better than me—any more than he already does, anyways.

“Look, Aiden,” I say. “Just because our parents are friends doesn’t mean you have to keep tabs on me. Just mind your own business, and I’ll mind mine.” I shove the paper back at him.

“I’ll mind my own business when you stop putting us at risk. Everything’s not about you, you know.”

I take a half-step back when I realize he’s legitimately annoyed. I can tell by the way his eyebrows have scrunched together.

“God, Aiden, they were potato chips,” I groan. “I will pay for them from now on. Happy?”

Aiden clenches his sharp jaw as he studies me. “Fine.”

I think about flipping him off, but think better of it. He’s already threatening to call my parents; I don’t need to give him any more reason.

Bone-tired from my night out, I climb the stairs to the third floor slowly. Aiden and I live in an old, creaky college dorm that smells like mildew and burnt coffee. The walls of the stairwell are all but coated in dust and spiderwebs, and long-yellowed tiles squeak under my feet as I climb. It’s not much, but for the next four years, it’s home.

I try to be quiet as I pull my keys out of my purse, because I know how paper-thin these walls are. It’s futile, though, because the door squeaks loudly as I open it.

My roommate, Zoey, is still awake, reading a book. She grins when I enter. “How was it?”

“Chill,” I say, flopping onto my bed. “We went to that new bar on 7th.” Normally, as a club tennis team, we play tennis when we hang out, but everyone needs to unwind now and then.

“It was, until Aiden chewed me out on the way in.”

“Ugh.” Zoey wrinkles her nose. “How does someone go on such a power trip from being an RA in the crappiest dorm on campus?”

“Aiden has been on a power trip since he was born,” I grumble. “Side effect of being a warlock.”

Zoey isn’t a witch herself, but our mothers are old friends. She’s as much in my world as I am, which is nice—who else am I supposed to talk to about accidental spell-casting? Not Aiden, that’s for sure.

“It’s not like he can do anything,” Zoey consoles. “Just annoy you.”

“I’m not sure that’s true.” I bite my lip. “He threatened to call my parents, and he actually might.” I don’t think they’d pull me out of school, but if they think I’m casting recklessly, there’s always a chance. I can make sure Aiden doesn’t see me sneaking snacks anymore, but I can’t control the casting I do in my sleep.

Zoey closes her book and drums her fingers on the cover. “Well, if you really want to get Aiden off your back, why not try a spell?”

I scoff. “What kind of spell? I don’t want the guy dead.” The opposite, actually. Aiden and I used to have a lot of fun together before he became so uptight.  Before he got, well, hot.

“Isn’t there that potion that makes people more agreeable for a bit?” Zoey asks. She pushes her glasses further up her nose. “If anyone could use it, it’s that guy.”

“You’re right. I’ve never made it, though.” I reach under my bed and pull out my potions book. It doesn’t take me long to find the right recipe: The Cordial Cordial. I skim the list of ingredients and compatible foods. It looks easy enough, and it remains effective after being baked into cupcakes.

Zoey sits next to me and pulls the book into her lap. “Cupcakes,” she says. “How hard can it be?”

I shrug. “I don’t know. Maybe I should just leave it alone. I’ll get a handle on the sleep-casting eventually.”

“But in the meantime, why worry?” Zoey asks. “Come on. It’s about time we shook things up around here.”

Against my better judgement, I feel a smile twisting its way onto my face. “Let’s shake things up.”

Samantha Martin is Frolic's Creative Executive. She loves television, podcasts and swooning over her favorite band members.
All Posts
PrevPreviousSuper Fake Love Song by David Yoon Excerpt, In Partnership With Miami Book Fair!
Next10 Horror Tales that Scarred me for Life by Laura MarksNext