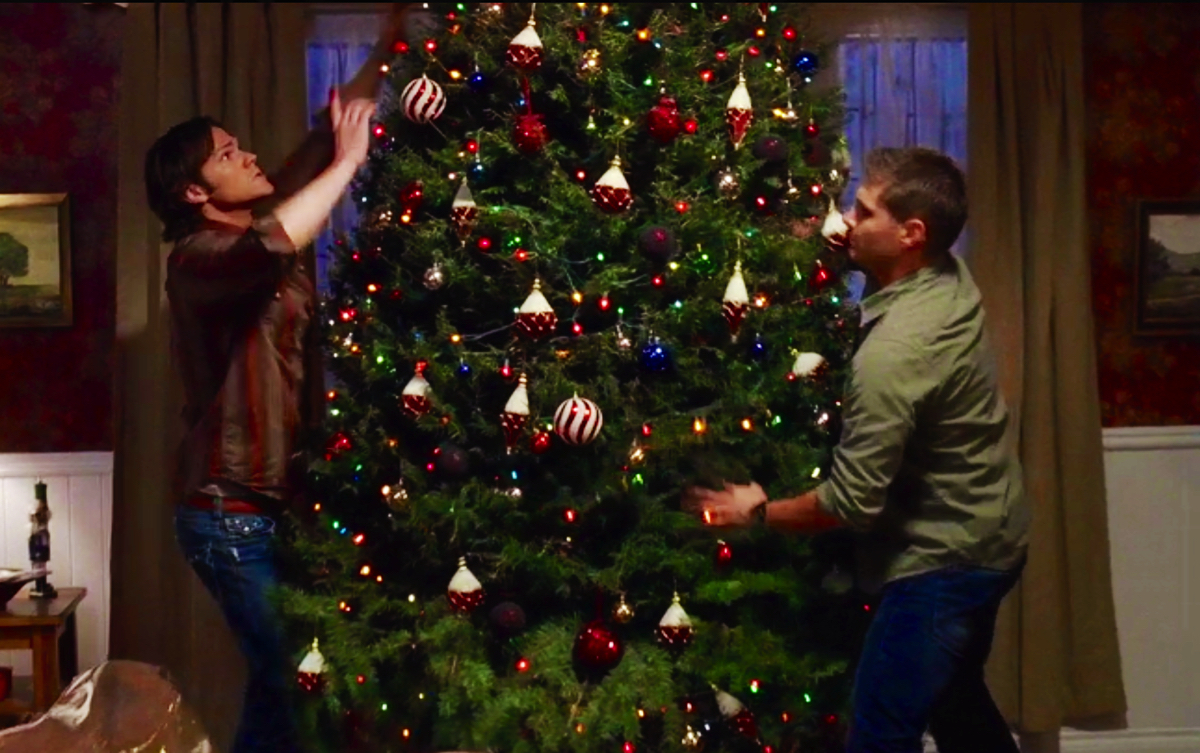 One of the things that has kept Supernatural popular for fifteen seasons is its refusal to take itself – or anything else – too seriously. Despite the apocalyptic level seriousness of the subjects it tackles, from family strife to addiction to angels and demons and God himself, the show can always be counted on to put its own spin on those topics. So when Supernatural did a Christmas episode back in Season 3, it definitely wasn’t your standard Hallmark variety holiday special. It’s dark and disturbing and downright horrifying at times, but it’s also one of my favorite episodes, with some of the most tender family moments on the show and an ending that satisfies even if it’s not your stereotypical they-lived-happily-ever-after fade to black.

This will be the last holiday season with Supernatural still on the air, so I thought it would be a good time to revisit its only Christmas episode – no matter what holiday you celebrate at this time of year, the feeling it will leave you with is universal.

Here are six of my favorite moments (in chronological order) from “A Very Supernatural Christmas.”

A nice old grampa dresses up as Santa to surprise his grandson. He hears a suspicious noise on the roof, and – as the young grandson watches in horror – is suddenly yanked right up the chimney, screaming. One blood-soaked boot drops back into the fireplace.

It’s not so much that I enjoy that scene, but holy hell, Supernatural – that is a horror movie version of a Christmas show if I ever saw one! I can’t help but respect the show’s loyalty to its horror roots.

2. Sam and Dean visit the shabbiest Christmas village you’ve ever seen, hoping to track down whatever “evil Santa” is yanking people up chimneys.

It’s season 3, so the brothers are still at odds sometimes, still working through their differences and “getting back to being brothers”. But they’re also young and nobody has been to hell yet, so they still bicker and tease like brothers do. Dean confides to the attractive young woman who’s Santa’s helper that no, they don’t have any kids with them, Sam just wanted to come.

Sam: No, no, he’s just kidding. We only came to watch. 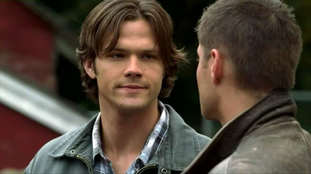 While on the surface, in the present day, the episode is about a MotW case, the heart of the episode is all about the Winchesters. Dean, who wants to celebrate his last Christmas (before he’s dragged off to hell) and Sam, who has lots of not-exactly-Hallmark memories of Christmas and doesn’t want to be reminded that his brother is about to go to hell because he sacrificed himself to bring Sam back to life.

Dean keeps asking why Sam hates Christmas, and then we get a flashback that helps explain. Every time we’ve been privileged to have a glimpse into Sam and Dean’s childhood, I’ve been grateful. It helps us understand who the characters are now and how they came to be who they are. Maybe it’s my psychologist training, always wanting to know how and why a person became who they are, but I crave backstory.

We see young Sam and Dean on a long ago Christmas Eve, holed up in a tiny motel room, their dad nowhere in sight despite his promise to be home for Christmas. Dean, so small himself, tries to make it a Christmas for Sam, stealing gifts and insisting that John was there and Sam just slept through it. It’s heartbreaking and heartwarming simultaneously, and explains so much about who the brothers are even to this day. Sam figures it out eventually – not only the truth about that Christmas, but about the monsters that are really out there – and while he sobs, it’s Dean whose heart breaks at being unable to protect his little brother. We see just how much of a parental figure Dean was to Sam when Sam gifts the amulet intended for their father to Dean instead. I remember gasping at the time the episode aired, finally understanding why Dean never (at that point) takes the amulet off, and just what it means.

That’s one of my favorite scenes in the entire series, even now as it comes to an end.

4. Madge and Edward Carrigan are the bad guys, but Merrilyn Gann and Spencer Garrett play them with so much enthusiasm and humor that I can’t help but enjoy them when they’re onscreen.

They’re like an over-the-top parody of suburban housing development holiday celebrants, and it’s done so well., There will never be a time I don’t laugh out loud when they happily accept a fruitcake from a neighbor and then let it fall to the floor in disgust the second they close the door – and Edward crushes it as he walks away. 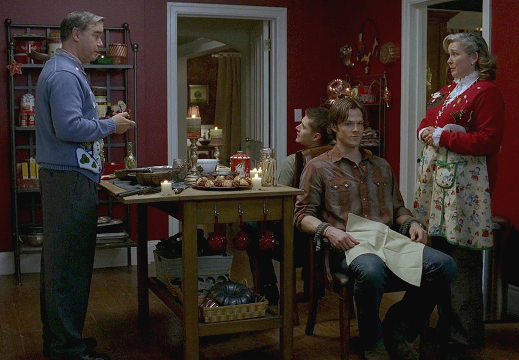 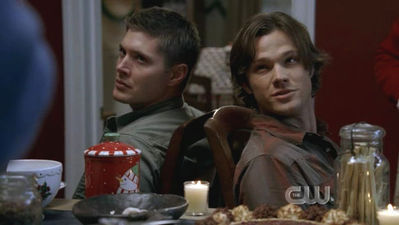 I have to close my eyes when they pull out Sam’s fingernail and almost do the same to Dean’s tooth, but I also have to giggle when Madge keeps telling Dean to not to swear and he finally grits out “I’ll fudging kill you!” Priceless.

They spontaneously decide to pretend to be carolers, so cue the saddest rendition of “Silent Night” ever – which is hilarious. Jared and Jensen are both so talented with comedy, and we don’t get enough of it these days. Or when we do get it now, it comes with cheesy “hey look we’re doing something funny” music which just takes away from the humor. 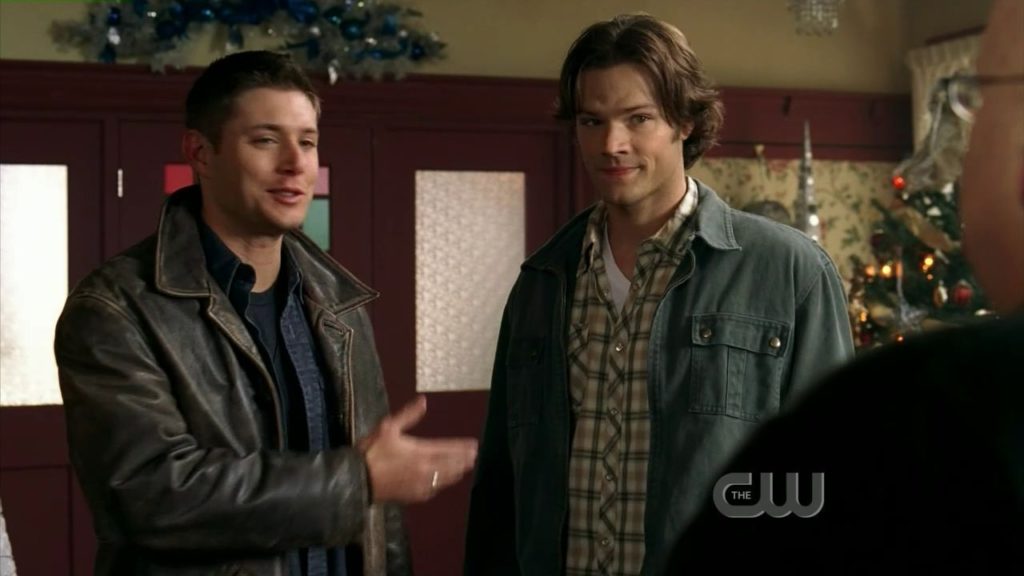 6. The last scene of this episode is another of my favorites of the entire series.

Dean comes back from buying beer to find that Sam has decided they’re going to celebrate Christmas after all. There’s a tree (decorated with air fresheners) and a Merry Christmas banner. 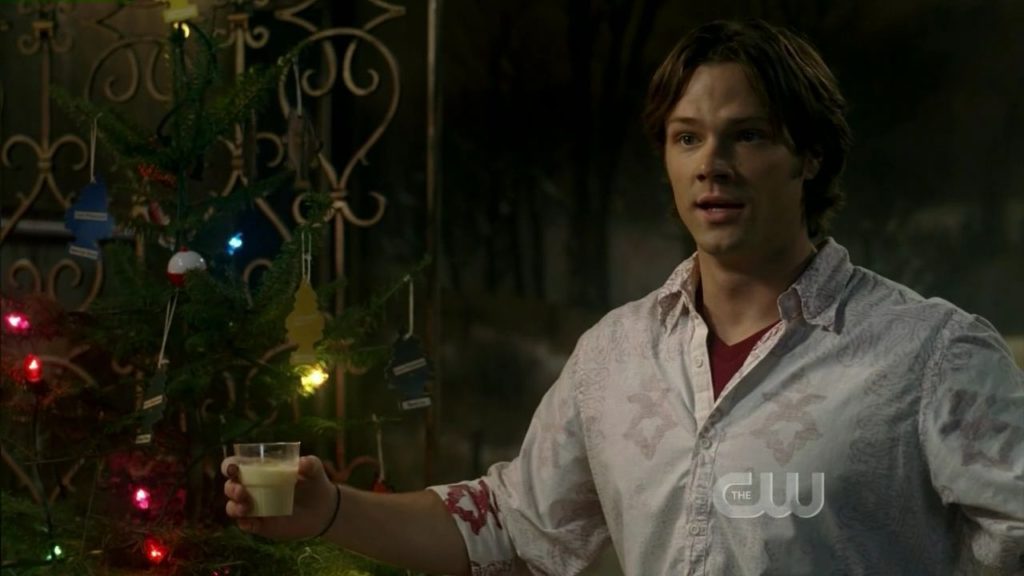 They – and we – are nearly overwhelmed with emotion at this point. Sam looks like he very much wants to say something to Dean, but can’t find the words.

The Winchesters find a lot of ways to say things that never use the actual words.

The camera pulls out to view Sam and Dean through the window, snow falling and a few haphazard Christmas lights reflecting in the sleek black finish of the Impala parked outside. It is perhaps the warmest scene of the entire series, one of the very few times that the Winchesters were content and—at least for the moment–felt safe.

And isn’t that what the holidays are all about?

1 thought on “Happy Holidays – With A Very Supernatural Christmas!”

Lynn Zubernis PhD is a psychologist and university professor who has published many books about fandom and fan psychology and why it’s healthy and positive and just plain fun to be passionate about the things we love. Her most recent books, There’ll Be Peace When You Are Done: Actors and Fans Celebrate the Legacy of Supernatural, and Family Don’t End With Blood: Cast and Fans on How Supernatural Changed Lives, have powerful chapters contributed by the actors and the fans of Supernatural, the show she’s passionate about. You can also go behind the scenes of that show and explore the ins and outs (so to speak) of fanfiction and fandom in her book Fangasm Supernatural Fangirls.
All Posts
PrevPrevious#TBT Book Recs: Love Your Bartender Day!
NextKeira Soleore’s Best Books of 2019Next