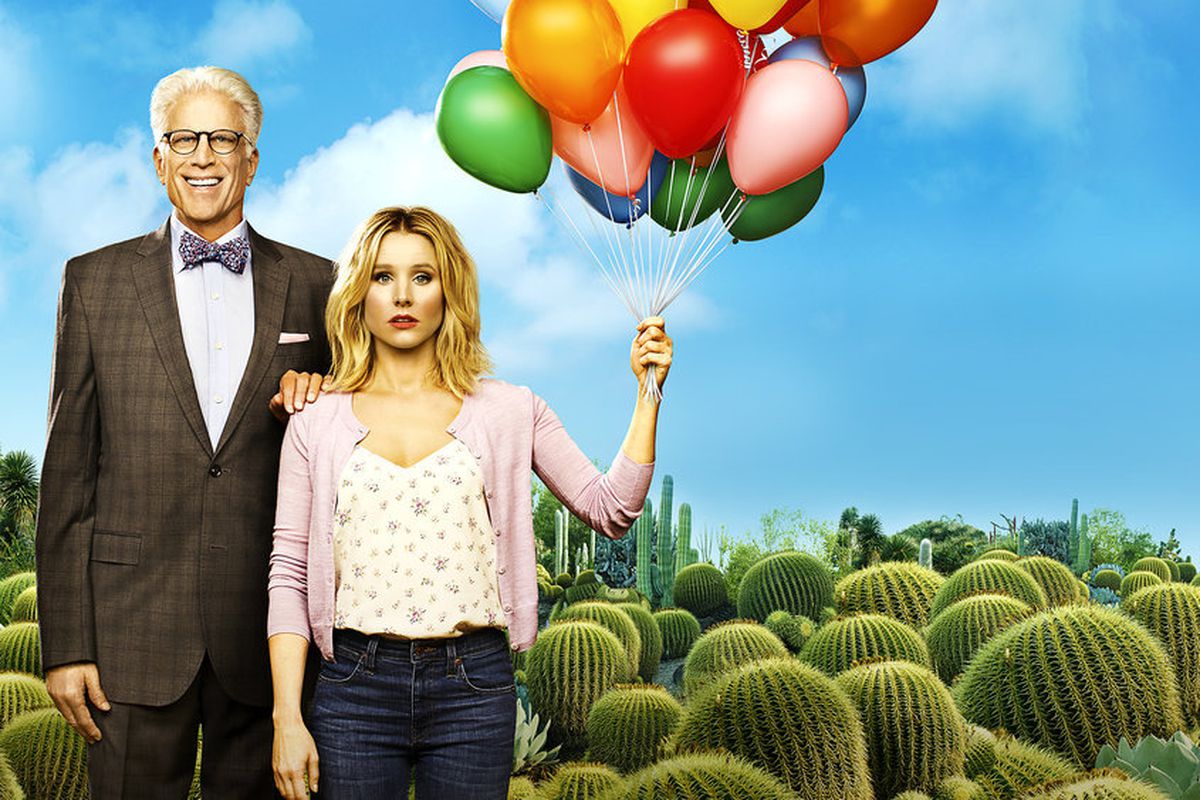 HEADS UP: This article contains spoilers for The Good Place through the current season!

As one of the most critically-acclaimed and internet-adored shows currently airing on television, The Good Place is one of my favorite pieces of popular culture these days.

There are plenty of qualities that make it a worthwhile piece of television. The jokes are precise, bizarre and hilarious. The characters are diverse and imbued with distinct personality traits. Each episode manages to be like a university mini-course in ethical principles without halting the plot. Plus, Ted Danson is just as delightful now as he was on Cheers.

But after much thought, it hit me that there’s another reason The Good Place manages to keep me eagerly coming back for new episodes: in great and small ways, this show cares just as much about loving well as it cares about living well.

Curious about what I mean? Take a look at these three central love stories of The Good Place!

Love Story Number One: The Love Between Eleanor and Chidi

This is the most obvious love story on The Good Place, but that doesn’t make it any less meaningful or lovely. As a gal who has harbored her share of teacher crushes, I definitely understand what Eleanor sees in Chidi. He’s smart, thoughtful (perhaps to a fault!) and loyal.

And it may be hard at first to understand what specifically draws Chidi to Eleanor, but the truth is that she helps him loosen up. Eleanor brings Chidi out of his comfort zone and moves him from a life of paralyzed fear to one of bolder choices.

Even though the two of them experience the teensy weensy consequences of rebooted realities by occasionally forgetting they were ever together, the two of these are the show’s OTP. And you know what I have to say about that? Hot Diggity Dog, they sure are cute!

This aspect of The Good Place is unique, because the world in which the characters live has technically been re-booted many times over. In the very first season, Jason and Janet quickly fell for one another and decided to get married. It’s the classic “world’s-most-loveable-doofus-meets-all-knowing-not-a-girl-not-a-woman-not-a-computer-not-a-robot” story.

But then, during various reboots, Jason has had romantic liaisons and relationships with the gorgeous and refined Tahani. Jason and Tahani are people who make no sense on paper, but still somehow seem so right when they’re together.

However, this is very hard on Janet, because she still carries a torch for Jason, but Jason doesn’t remember his previous marriage.

As of the midpoint of season three, all parties are now aware of their relationships to one another. And unlike many love triangles or will they/won’t they plots in popular culture, I’m left feeling like there’s no single “right” answer for these three. There’s no compelling reason to be “Team Tahani” or “Team Janet,” because they’re both wonderful and deserve to be with Jason the goofball if they really want to.

It is a fool’s errand to claim I know where The Good Place is going with this plot. But if I had to guess, I could easily believe that the show’s writers are slowly building a major mass media example that makes viewers cognizant of polyamory.

If you’re not familiar, polyamory is the ethical, consensual practice of non-monogamy (loving multiple people). And since The Good Place is literally founded on exploring ethics, it’s exhilarating to think about the possibilities that could be presented in the Tahani/Jason/Janet love story.

Love Story Number Three: The Love Michael Has for Humanity

Eleanor and Chidi may be the official OTP of The Good Place, but my personal favorite dynamic is the love story between Michael and all of humanity.

In a classic enemies-to-lovers plotline, Michael begins The Good Place as a demon who is literally hell-bent on making the afterlives of our main characters miserable. But even when he’s on this undercover mission and sees humans as inconsequential subordinate beings it seems Michael can’t shake a very real interest in the eccentricities of humanity. His motivations may be malicious and deceptive, but his adoration for human inventions like suspenders and paperclips comes across as very, very real.

Then, in season two, Michael changes over time from enemy to ally as the fate of the four humans is inextricably tied to his own future. And when they’re in danger of being shipped off to the actual Bad Place forever, Michael helps them escape and truly cares about them as people beyond his own needs and purposes.

And now, most of the way through season three, it’s clear that Michael has gone from a lingering fascination with humans to full-blown love for them. His various experiences on Earth living and interacting with humanity thrill and delight him. And he has made the transition from someone who cares deeply for the four main humans to someone who is willing to be a champion for the goodness of all humanity. It no longer matters that only his friends make it to The Good Place. When Michael discovers an injustice that impacts all of humankind he takes it upon himself to fight for people who are just trying their best.

Though all of the love stories on The Good Place are compelling and interesting, the love Michael has for humanity is the one that keeps me tuning in every Thursday. Because he loves us and believes in us so much now even after seeing some of the crummiest things people are capable of. And if Michael can love people like that, then I can love myself and extend more love toward my fellow humans, too.

No matter which of these stories you find most wonderful, I think we can agree that The Good Place remains one of the Internet’s favorite shows for good reason. And now we can see that it’s chock full of some forking fantastic love stories, too!

Erin Phelps is a lover of swoony romance novels, superb television and movies, and splendid comedic podcasts! In addition to writing for Frolic, Erin works at a fun customer service-oriented job at a salon. Sometimes, she can even be found teaching Women’s and Gender Studies at her local college! Her love language is well-constructed pop culture references and her favorite treat is a caramel latte.
All Posts
PrevPreviousDaily Frolic: Tea With the Dames Documentary
Next5 Questions with YA Author Dan GemeinhartNext