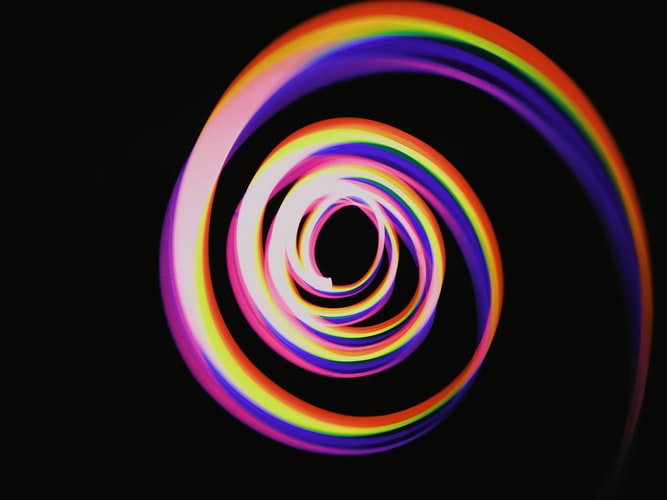 [Note from Frolic: Today, we welcome Lisa Straussberg to the site. She’s sharing her story of hypnosis. Take it away, Lisa!]

This story was first shared at the Story Salon in Los Angeles on the evening of March 11, 2020. After a full day at work, I rushed to make headway in traffic, zigzagging across the windy Topanga Canyon road, at the same time trying to take in the AM radio news. Whispers of the pandemic were growing louder, so I wanted to be informed. Within a span of 30min– between bits of spotty radio signal and incoming text messages–  I learned about the canceled NBA season, President Trump declaring a European travel ban, and Tom Hanks and Rita Wilson contracting the Coronavirus.

Now with half the usual audience at the Story Salon– whether by choice, commitment, denial or a mixture of them all– the event still went on.

My story is about hope in the face of what I thought was only a happy time seared in the past that couldn’t possibly come back because– well, that’s not how life works. The truth is, it can, vividly so, and hypnosis proves it. In these changing and uncertain times, I hope my story inspires you to believe in good times ahead, too.

In 2009, my first starring movie had its premiere screening at the historic Paramount Pictures’ Sherry Lansing Theater.  The event was called “Freshly Squeezed,” parading a delicious illustration of a juicy orange on it’s digital flyer to showcase short films of select USC grads. I invited agents, managers, casting directors, and organized the car ride with my new LA friends. Strutting a cute dress and mini entourage, my excitement plumed. I was living my dream, and I was sharing it with a packed house of industry peers. Until recently I realized, I was honoring myself most of all.

10 years later I met with a hypnotherapist. I reached the end of my rope. All the spiritual know-hows I practiced to feel centered were barely successful. That night in 2009 was supposed to change my life, I thought: I would be recognized as a rising star. I even signed with a talent manager, impressed by my performance and emotional range. But with years of nothing coming close to the experience I had on that film– so proud of the end result and overjoyed by the reception– doubt set in. I lost the small bit of confidence I gained. In my naivety, there was a single trajectory to one’s career, and I wasn’t very kind to myself if I didn’t emulate this falsely perceived, upward path.

The hypnotherapist asked poignantly, “Tell me the happiest moment in your life thus far.” Without hesitation I described the moment I saw my face on the big screen:

“The lights went down in the theater. The chatter stopped. The title appeared.

I saw my image, magnified– looking at me.

I was witnessing the vision for myself years before, acting itself out in front of my very eyes.

And just when I thought it was all in my head;

The lights came up, the applause rushed in.

Gazing at the row of familiar smiling faces, clapping in my direction, I felt a surge of appreciation.

Warm feelings of recognition baked inside. The sense of accomplishment with what I envisioned when I set out to Los Angeles was priceless.”

I cemented the experience as a god given miracle because– it was so rare. I could have gotten used to it, but I was embarrassed by how much I enjoyed it. Never wanting to lose humility, I continued to search for that high again, but wouldn’t allow it in.

The hypnosis lasted 30 minutes. I reclined, closed my eyes, and remained aware of what was being said. I attribute experimenting with meditation with my ability to pay attention and catch instances my mind trails off. While in this state of relaxation, I heard the hypnotherapist recount my happy memory projected on the big screen, surrounded by friends. The same feelings flooded my psyche, and this time I allowed myself to relish in the flashback, cracking a smile.

I was instructed to listen to our session’s recording as much as I wanted. I listened to it every day, twice a day: in the morning just before waking, and at night right before sleep. I was determined to seep positivity into my subconscious, short of drilling a hole in my head. I trained myself into thinking I needed a miracle, and a miracle it was.

3 weeks later, I came across an email from my union SAG, promoting an annual video contest. I’d seen that email last year, and instead of generating the same thought response– which at the time was, “there’s no way I can do that,” followed by the delete button– this time was measurably different. It percolated. The call for entries asked for stories about Los Angeles, showcasing the city in all its glory. I remembered my move to LA. Despite the struggles, I still wanted to be here for many reasons. And maybe those moments could be expressed in a film, around my favorite places highlighting the LA I see.

Suddenly, two friends popped into mind: one who I had become close to, having also grown up in Queens and a fellow NYU Film alumni. He’s an exceptional film editor. The other friend, whom I have known in the same social circle, has a permanent penchant for fun. He is an expert videographer, and takes pride touting the latest camera models he purchases for his business.

The unfamiliar foresight that came next spoke to me like, “Why not broach the idea of working together on this project? If they’re not interested, you’re off the hook.” So I wrote an email– a long email– to my two friends covering everything I could think of, convincing myself as I was trying to persuade them to fuse our talents and make something good. If anything, it could be fun. We would gain a portfolio piece for our respective trades, and maybe even win some prizes which I was happy to extend if we won.

My rationale stepped in while typing. I hadn’t worked in months. Having recently met with a SAG career counselor, I was advised to look into producing or volunteering to increase my confidence in filmmaking if that was the direction I was heading. Now it was all clicking into place. Producing a short would refresh my skills, draw from my film degree and act as a creative jumping point in job interviews. It was win win.

The response? They agreed to discuss the possibility, if I put together a script. Then I panicked. Then I spent time crafting a story and put together a fancy creative brief for us to review.

When I heard, “Let’s do it!” come out of their mouths, I nearly passed out. This was actually happening! What did I get myself into? After the initial shock, I motioned to frantically build out a schedule and call friends who I preemptively cast, hoping they would actually agree and sought help on the days we’d be shooting.

I describe my transition to LA as a heart-pounding roller coaster ride. If you’re crazy or gullible enough to partake, there are two ways to approach it: Some people ride with their arms up enjoying every twist, turn, plunge, and upside down, criss-cross loop. Others have their eyes closed holding onto the rails for dear life. I may have occasionally opened my eyes– mainly to check if it was over yet. And while making this film had exhilarating moments, it wasn’t a cakewalk. The hiccups felt like fast furious downward descents. Somehow, in inexplicable ways, things worked themselves out. The ride picked up again– to new depths…and drops. The hypnosis recordings were instrumental in staying in the game. Once it started, I was going to see it through. My mantra became, “Just get it done. The accomplishment will not be whether I am admitted to the contest, win the contest or get prizes from a win.” I just wanted to get it done.

It got done. 3min and 22seconds of it. I finally breathed a sigh of relief submitting it in the last hour. Two days later my short film entitled “Home is…”  made Official Selection in the 2019 On Location NewFilmmakers Los Angeles Video Project Premiere. I was beside myself. Full of excitement and exhaustion. Now I had to prepare for a premiere! Send the sponsors all needed materials, promote the date on social media, contact cast and crew, invite friends, and figure out what I was going to wear!

The night of the premiere was a magical outdoor screening. Arm in arm with friends, cast, crew, and too many bouquets for 2 hands, I beamed on the red carpet. I also talked to press while trying to juggle an honorary plaque and a Certificate of Achievement from the City of Los Angeles. When the time came, the lights went down, the chatter stopped, my film started to play, and I saw myself again– magnified on the big screen. Here I was for the second time in 10 years to the month– just as the hypnosis suggested– witnessing the vision I had acting out in front of my very eyes.

And just when I thought it was all in my head;

The lights came up, the applause rushed in.

Gazing at the row of familiar smiling faces, clapping in my direction, I felt a surge of appreciation.

It really was a miracle to re-create a momentous occasion through hypnosis. Keeping up with the recording diligently paid me a powerful reminder of what’s possible if you can dream it.

A native New Yorker, Lisa Straussberg holds a film degree from NYU and wrote, directed, and edited the award winning short “Queen of Heaven” before moving to LA to continue her pursuits in acting and entertainment. She is a freelance Script Supervisor, Associate Producer, Sometimes Actor with added passions in writing and travel. Her affinity for adventure lead to backpacking Europe four times, circumnavigating the Middle East, celebrating New Year’s in Brasil, festival hopping in Thailand and spending a summer leading camping tours across North America. Writing is her constant companion and she’s excited to share more of it to the world.

Where Romance and Pop Culture Live Happily Ever After.
All Posts
PrevPreviousRomancetagram Real-Talk with @readaholic19
NextHockey Players Heat Up The Pages by Jeff AdamsNext