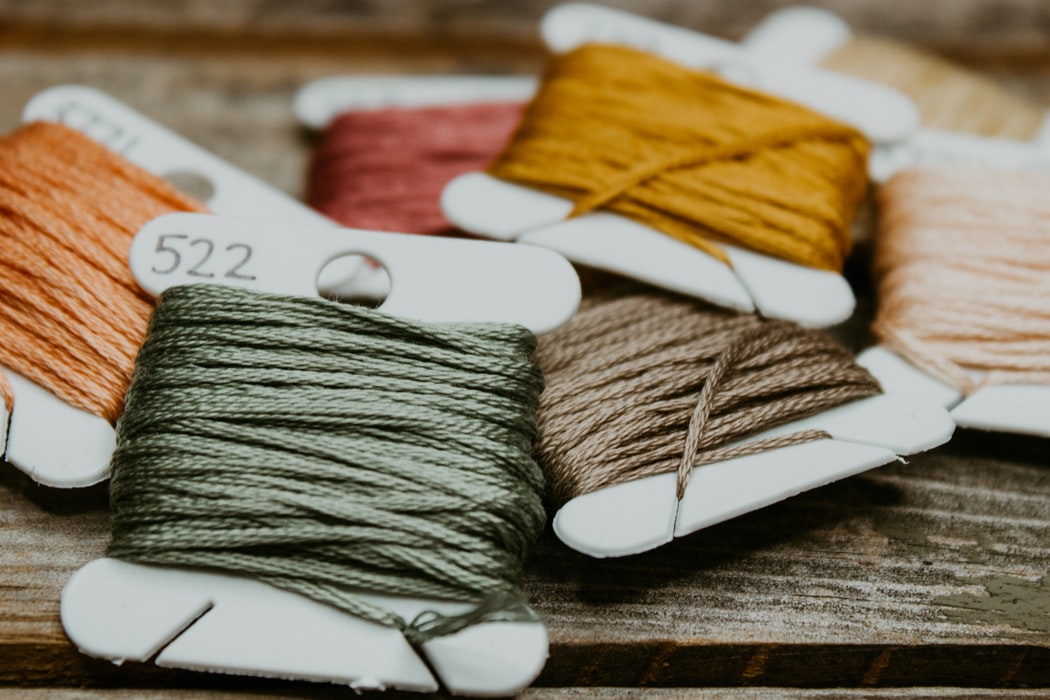 [Note from Frolic: Today, we welcome author Damhnait Monaghan to the site. Ever wonder what rug hooking has to do with writing? She’s here to tell you!]

I’ve never considered myself to be artsy/crafty. So, it came as a surprise when, in my first novel, a group of secondary characters whom I collectively christened “the Holy Dusters,” revealed themselves as dedicated rug hookers. Their crafty nature made me slightly uncomfortable. This was definitely not “write what you know.”

My novel tells the story of Rachel, a brand-new teacher from the mainland, marooned in a fishing village in Newfoundland and Labrador. I wanted to focus on her journey, but the Holy Dusters have sharp elbows; they wheedled their way into my heart and onto my pages. So, I researched the craft of rug hooking. Traditionally crafters used recycled clothing cut into strips to make rugs and mats, pulling the material through burlap with a special hook. In modern times, wool and other material are now used. I found the website of artist Deanne Fitzpatrick, whose beautiful hooked rugs are displayed in public and private collections. In addition to being a brilliant artist, Deanne is also a teacher. I watched her instructional videos until I felt able to correctly describe the craft in my novel.

Months later, during the pandemic, I found myself back at Deanne’s website, browsing her beautiful rug hooking kits. To my delight I found a beginner’s kit called ‘Little Cove’ – the very name of the fictional community in my debut novel New Girl in Little Cove. Despite my lack of craftiness, with that coincidence, how could I not try?

When the Little Cove kit arrived, I eagerly examined the cozy house sketched on burlap, the colourful piles of yarn and fabric and the wooden handled hook. I arranged the materials in a wicker basket and placed it on the sideboard, where it sat, neglected, for weeks. Who was I kidding? As a university student I once knit a Christmas sweater for a boyfriend, spending too much money on wool, needles and a pattern book. But you can’t put a price on young love, right? Or at least that’s what I told myself as I dropped stitches or knit when I should’ve purled. The finished garment did not in any way resemble the pattern – the sweater was lumpy and misshapen. As my boyfriend gamely tried it on, it was already unravelling in places. He was smart enough to suggest that maybe he could wear it camping. (Reader, he did not.)

But as dull December pandemic days drifted slowly past, I pulled the wicker basket into my lap, examining its contents. Could I do it? For inspiration, I returned to Deanne’s instructional videos, perking up when I heard her say, “It’s a very forgiving craft.”

Forgiving? I was hooked. (Ahem.) Besides, it was either try hooking or return to writing the “difficult” second novel. I was equal parts surprised and pleased to complete the project. Even more surprising to me though, was how the process reminded me of some excellent truths about writing.

One stitch at a time.

This is one of Deanne’s mantras in her videos and it reminded me of Anne Lamott’s advice in her writing craft book, “Bird by Bird.” When she was a child, her brother asked their father how he would ever get his project on birds done and the reply came, “Bird by bird.” How do you hook a rug? Loop by loop. One stitch at a time. How do I write the difficult second novel? Word by word. One word at a time.

Keep at it even when the going gets tough.

The way Deanne hooks rugs in her videos is almost hypnotic. Her hook moves rapidly along and loop after neat loop appears in quick succession. My own progress was slow and clumsy. Sometimes the wool caught and shredded. Sometimes a twine of the burlap would get tangled into the wool and become part of the loop. Often, I couldn’t latch onto the wool; an empty hook would break through the burlap repeatedly. But if I contained my frustration and kept trying, rather than toss the hook aside, eventually I’d get past the difficult loop and back on track. In the same way, if I force myself to sit at my desk, to dig deep for the words, to keep at it, progress on my second novel will be made.

Some stitches come easier than others, but all of them count.

Sometimes my hook came up through the burlap like a spoon through custard. But often, I struggled, only managing a proper loop on the third or fourth attempt. Still, when I reached the end of the row and looked back, it wasn’t obvious whether a particular loop had come easy or hard – they all blended together. And so too with writing. Some days the words flow and some days we fight to throw down a paragraph. But when the manuscript is done, it isn’t obvious where we struggled – it all counts.

Look at the big picture, the forest, not the trees.

I was unimpressed with the loops I’d hooked to create the window frame in the Little Cove house. The edges seemed crooked, ragged, wrong. But once I’d filled in the house around them, I didn’t notice the frames as much. They were good enough.

It reminded me of an anecdote from Elizabeth Gilbert’s craft book “Big Magic”. She worried that one of the characters in her novel ‘The Signature of All Things’ was underdeveloped, but couldn’t figure out how to fix it without a major rewrite that might upset the balance of the novel. Eventually, against the advice of beta readers, she left the character, and the novel as they were. It was good enough. The novel did well and most readers didn’t seem to notice that underdeveloped character, who, like my house windows, blended in to the whole.

One of the last bits I hooked was the sky, with several shades of blue to choose from. Emboldened by my success thus far, I decided to get all fancy and work with two different shades of blue simultaneously. This meant alternating between two different wool segments. Inevitably, the two strands got tangled into a hot mess underneath the burlap and I had to pull all the stitches out. (Did I mention it’s a forgiving craft? Phew.) In the same way, when writing a first draft, don’t spend too much time getting fancy. Lay down the words. You can always go back and polish them later.

But feel free to explore and take detours.

The Little Cove image showed a grey rock separating land and sea. I didn’t like the look of it, so I ignored the instructions and instead hooked a little cloud into my blue sky which I’m ridiculously proud of. In the same way, although we writers may have an outline or a synopsis for a novel, we shouldn’t be afraid to let the words take us where they want. You never know where you and your characters will end up.

My little project isn’t perfect, but I’m proud of my handiwork and display it in my office. I may even be able to use the experience, should I ever write a sequel to New Girl in Little Cove. My novice efforts are not fit to describe the expertise of the Holy Dusters. But towards the end of the story, Rachel asks the women to teach her how to hook. I’d like to think she’d catch on more quickly than I did, too.

Damhnait Monaghan was once a mainlander who taught in a small fishing village in Newfoundland. A former teacher and lawyer, Monaghan has almost sixty publication credits, including flash fiction, creative non-fiction, and short stories. Her short prose has won or placed in various writing competitions and has been nominated for a Pushcart Prize, Best Small Fictions, and Best Microfictions. Her Lessons in Little Passage placed in the top six from more than 350 entries in the 2019 International Caledonia Novel Award. Now living in the UK, she’s active on twitter @downith, and you can explore her website at www.damhnaitmonaghan.com 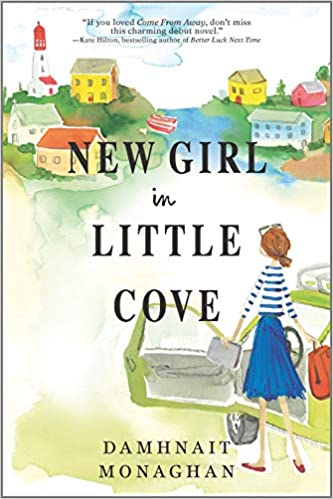 New Girl in Little Cove by Damhnait Monaghan, out now!

After the local French teacher scandalizes the fishing village of Little Cove, Newfoundland, by running off with a priest, the school looks to the mainland to fill the job quickly. They want someone who can uphold their Catholic values and keep a motley group of largely unwilling students in line.

The position is filled by mainlander Rachel O’Brien—technically a Catholic (baptized!), technically a teacher (honors degree!)—who’s desperate to leave her current mess of a life behind. She isn’t surprised that her students don’t see the value of learning French. But she is surprised that she can barely understand their English… Is it a compliment or insult to be called a sleeveen? (Insult.) And the anonymous notes left on her car, telling her to go home, certainly don’t help to make her feel welcome.

Still, she is quickly drawn into the island’s traditional music and culture, and into the personal lives of her crusty but softhearted landlady, Lucille, her reluctant students and her fellow teacher Doug Bishop. But when her beliefs clash with church and community, she makes a decision that throws her career into jeopardy. In trying to help a student, has she gone too far?

Where Romance and Pop Culture Live Happily Ever After.
All Posts
PrevPreviousFind True Love in this Excerpt of The Soulmate Equation by Christina Lauren!
NextTrope Rec Tuesday: Estranged Best FriendsNext