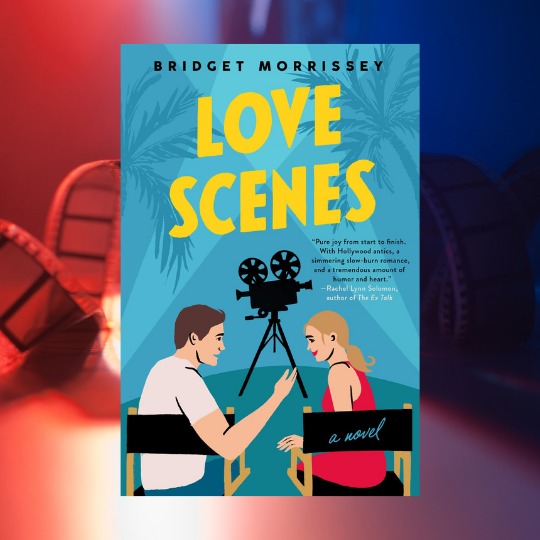 We’re so excited to bring you this exclusive excerpt from Love Scenes by Bridget Morrissey! First, a special note from the author:

“I am so excited to share this exclusive excerpt from my upcoming novel, Love Scenes! The story follows Sloane Ford, a down-on-her-luck actress who has recently been roped into working as a consulting producer on her famous family’s latest movie shoot. After a rocky first day on set, Sloane gets tasked with helping the film’s leading man, Joseph, learn his lines. The two starred in a movie together five years prior, and the entire production was a disaster. Safe to say Sloane has been weary of Joseph ever since.

In this scene, Sloane shows up at Joseph’s trailer for their second morning rehearsal. She has been trying her hardest to be cold to him, but he is determined to prove to her he’s not the man she knew five years ago. I love this moment because it’s the first time we see Joseph’s charm work on her. Sloane won’t let her guard down easily, but for just a second, she eases up. Enjoy!” 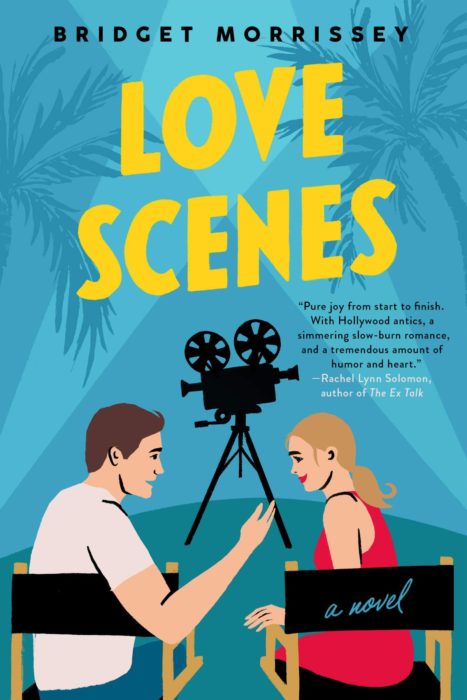 Acting like she’s in love with her handsome nightmare of a co-star—in a movie directed and produced by her complicated Hollywood royalty family—is Sloane’s job. But what happens when the lines between script and reality get blurred?

Out-of-work actress Sloane Ford is in desperate need of something to do after losing her steady TV gig. When her famous family ropes her into working as a producer on their World War II-era romance, they neglect to mention that the film will be headlined by Joseph Donovan, her least favorite former co-star of all time. The roguish actor made her life a living hell the last time they worked together, using his movie star good looks and Irish charm to cover for his erratic professional behavior. On their new film set, he promises he’s different now, but Sloane is far from convinced.

As filming gets underway, it becomes clear that anything that can go wrong will go wrong. When the lead actress is abruptly fired, Sloane agrees to step in and take over the role, and she starts to remember why she fell in love with acting in the first place. On camera, she and Joseph share an electric chemistry. Off camera, they’ve been honing their characters and, much to Sloane’s surprise, growing closer. But playing the role of a woman in love with Joseph Donovan is a dangerous business, and the more time they spend together, the less Sloane can tell what’s real between them, and what’s just for show.

Our third day of production begins like the one before: Joseph at his trailer door with a cup of tea in hand and classic rock in the background.

I’ve got my iced coffee in hand and my copy of the script, marked up with all the notes and ideas I came up with after Tyler left me alone to wallow. It was the best way to pass the time, having sent so many late-night emails about my upcoming foundation gala that the event coordinator called me to ask if everything was all right.

“Making sure you know your lines is the only real task I’ve been given,” I explain. “So until further notice, you’ll see me here every morning.”

Across from where I sit on the couch, Joseph’s bottle of whiskey remains unopened, and the photo of his mom has been moved to its original place, on a shelf above the stovetop. Everything is basically the same as it was the day before, except there’s conveniently an extra coaster set out on the coffee table. Joseph makes no mention of it, and neither do I.

I do, however, put my drink atop it.

Joseph brings over his cup of tea, setting it on the other coaster, then sits beside me again. “I have a question.”

This makes me bristle, a hot flash of vulnerability hitting me out of nowhere. There’s nothing he could ask that would embarrass me, and I’m still nervous. Can he sense a vibe between me and Tyler? Does he know about how I told Haven to treat him? Is he going to ask if my dad is okay? Is he going to press the issue of why I really turned down the part of Elise?

“What?” I try to sound flippant.

“Are you really done with acting?” he asks.

My practiced PR line floats off my tongue before I can reconsider. “I’m taking each day as it comes,” I tell him, knowing full well it sounds hollow and false. He hasn’t earned the truth.

Joseph scrunches his lips. There’s a furrow between his brows that deepens as he nods at me.

“Nothing.” He taps his fingers on his jeans. “Seems like a load of shit is all.”

My jaw drops. “Are you kidding me?”

“If you asked me about my career and I told you I’m taking each day as it comes, you’d never let me live that down.”

He’s right. And I hate him even more for knowing that. So I double down. “Well it’s true.”

“Alright then, what is each day bringing you, Sloane?”

“You can judge me all you like, but I’m not actually here to impress you.”

“And you’re being annoying.”

“That sounds like an upgrade from yesterday.” He leans back, arms folded across his chest. “Whatever is really going on, I hope you’re not done with acting forever.”

I roll my eyes at him. “Please stop paying me empty compliments.”

The smirk falls off his face, and we plunge into a silence so strained I search for something unaffected to say and find a surprising amount of remorse bubbling under the surface instead. The problem is, I really can’t tell if he’s serious. And it’s hurtful for him to keep pretending that he is.

“You think I go around telling everyone in town they’re actually good at their job?” he asks finally.

He waits before he speaks, observing me. Thinking. Calculating.

“Well, I don’t,” he says, daring me to ask for elaboration.

Another stretch of quiet threatens to consume us. “We need to rehearse,” I remind him.

He checks the time on his phone. “Can’t we be friendly with each other for a little longer?”

I wish it wouldn’t get me into trouble to gut punch him. “I don’t need to be your friend.”

“Okay. Perhaps I could be something less than your mortal enemy then? For at least another minute or two.”

“Please. I don’t have enough time in the day to waste on making you my mortal enemy. What are we? Medieval knights?”

He laughs, like I was trying to be funny. Which maybe I was. Maybe it does amuse me a little, to spar with him. Just the tiniest amount. “C’mon Sloane. You hate me. It’s clear as day.”

“Actually, Joseph, I choose kindness. Thank you very much.”

He laughs harder. Which was potentially my intention.

“Can we get back to work now?” I ask, fighting off a smirk.

“Fine. I lay down my sword. Your wish is my command,” he says with a hand pressed to his heart.

Bridget Morrissey lives in Los Angeles, California, where the novel is set. A former actor who has appeared in a number of commercials, Morrissey offers readers a vivid and realistic behind-the-scenes look at the makings of a film―and all the backstage happenings that take place when the camera’s not around. With careful research and insight from other actors, Morrissey delivers readers a meticulous look at the set of a Hollywood production.