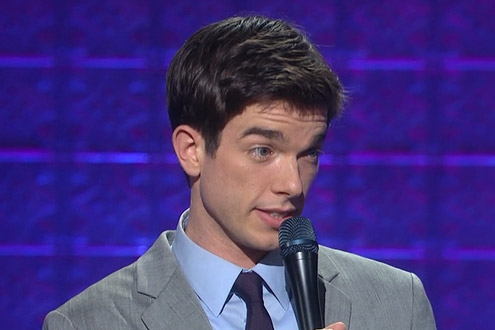 Let’s get this out there right off the bat: I am a MAJOR John Mulaney fan. When I cannot sleep, I often put on his stand-up specials to lull me into a sense of hilarious safety before drifting to dreamland. When I serve coffee without cream or sugar to one of my guests at work, I say “one black coffee” out loud and chuckle to myself, remembering how it’s a punchline in his special The Comeback Kid. And my husband and I quote his comedy to each other over and over because somehow it never gets dull for us.

So I was pretty much destined to enjoy his new special, John Mulaney and the Sack Lunch Bunch from the get-go.

There’s a great Vulture article out there that uses an early Mulaney bit (The Salt and Pepper Diner) to explore the way in which his comedic style has a specific patter that is almost musical in nature. So perhaps it’s no surprise that Mulaney’s latest special, John Mulaney and the Sack Lunch Bunch, became a musical show for children by a man with neither children nor musical ability.

Instead of a traditional standup routine, this special is a sendup of children’s media that is reminiscent of shows from the 70’s through 90’s. It’s a little bit Electric Company, a little bit Sesame Street, a little bit Free To Be You And Me, and a lot of delightful weirdness. Mulaney has traded his rhythmic comedic storytelling for a role as the facilitator on a kids show, and the results are fascinating.

Mulaney Is Present…Even When He’s Not

One unique quality about this special is the way that, unlike a straight hour of standup, John Mulaney doesn’t spend most of his time on screen. Of course he’s in front of the camera to lead segments with the kids or do a brief transition from one scene to another. But for the most part, Mulaney takes a back seat and lets the kids and guest stars shine bright.

Don’t get it twisted, though–even when he’s not the center of attention, the special is infused with Mulaney’s sensibility from start to finish. Some bits, like the song about an algebra tutor who lost his eye, are reminiscent of specific jokes from previous Mulaney routines. Other parts, like name-dropping specific celebrities, echo his brand of joke rhythms. And, of course, Richard Kind shows up for a brief sketch, solidifying his status as a Mulaney collaborator after their turns in Documentary Now’s “Co-op The Musical.”

Folks who aren’t Mulaney superfans may watch this show and wonder why he’s not present in every stage of the special. But even when you can’t see him, trust me—Mulaney is ever-present in this work!

And yes, that last sentence almost reads like an object lesson from a classic children’s show. We’re getting meta with Mulaney here!

Of course, one of the defining aspects of John Mulaney and the Sack Lunch Bunch is that it’s a music special! And though Mulaney’s sensibilities are all over the show, it must be said that co-writer Marika Sawyer is responsible for helping to bring the ideas to life with the perfect musical planning.

This special is so re-watchable because of its songs that wiggle their way into your heart and mind. Each one is perfectly reminiscent of old-school Sesame Street tunes and motifs. If I’m completely honest, I will share that I feel some of the songs are a bit longer than they need to be for their jokes/themes to pay off. But that doesn’t stop them from working overall. And there are SO MANY songs to enjoy for various reasons!

Are you a fan of 80’s rock like the Talking Heads? You’ll love the song “Pay Attention!”

Perhaps your tastes lean toward classic Motown sounds, in which case “Grandma’s Boyfriend Paul” will likely make you smile.

If you’re my math teacher husband, the “Algebra Song!” will tickle you even though it’s ridiculous.

Or maybe you were a picky eater as a kid, in which case the song “Plain Plate of Noodles” will speak to your very soul.

As for me, my favorite is the final major song performed by Jake Gyllenhaal as “Mr. Music.” I never knew that the actor who brought us Donnie Darko could be so very silly. In fact, I’ve found myself singing bits of “Music, Music Everywhere!” out loud at least twice day since I first watched the special.

Talking About Fear Is Freeing!

A major theme of John Mulaney and the Sack Lunch Bunch is the exploration of all kinds of fears. Kids and adults alike are asked about the things they’re afraid of. From clowns to death to the theory behind the plot of The Purge movies, lots of fears are put out in the open.

Mulaney’s definitely interested in showcasing how different children’s tv is now compared to the series and specials that The Sack Lunch Bunch send up. One major difference: kids shows of yesteryear were often willing to explore dark topics like death, social issues and deep or confusing feelings.

After spending about an hour with John Mulaney and the Sack Lunch Bunch, I found it to be surprisingly freeing to step back into that childhood mindset of facing fears with whimsy, music, and community. It’s not as squeaky clean as many of the shows that are produced today with young audiences in mind.

It’s not standard comedy fare but I truly recommend John Mulaney and the Sack Lunch Bunch as a way to get in touch with your inner kid with silly jokes, catchy songs, and a particular comic sensibility!

Erin Phelps is a lover of swoony romance novels, superb television and movies, and splendid comedic podcasts! In addition to writing for Frolic, Erin works at a fun customer service-oriented job at a salon. Sometimes, she can even be found teaching Women’s and Gender Studies at her local college! Her love language is well-constructed pop culture references and her favorite treat is a caramel latte.
All Posts
PrevPrevious#TBT Book Recs: Funny Reads for Global Belly Laugh Day
NextRomance Unlaced: Historical Romances with More at Stake than LoveNext