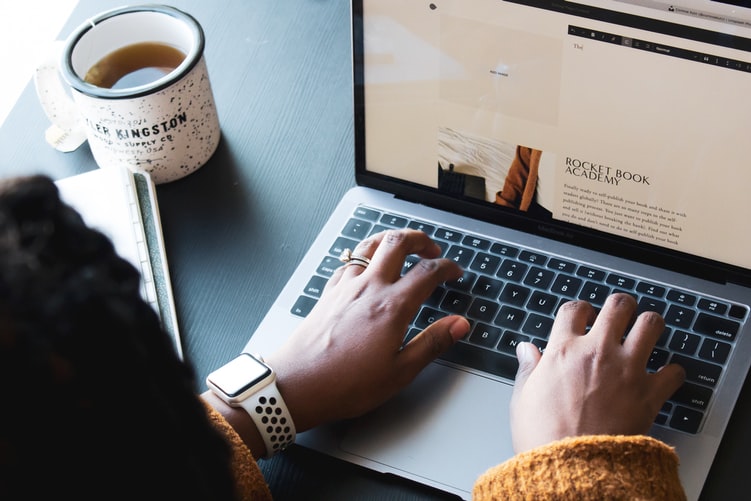 [Note from Frolic: We are so excited to bring you this new series: Frolic Podcast of the Week! Each week, we’ll ask one of our great podcasters to share a bit about themselves. Up next, we have L. Penelipe from My Imaginary Friends Podcast! She’s sharing her top writing tips. Take it away!]

If you are struggling to find the time to achieve blissful BICHOK (butt in chair, hands on keyboard), this is my best advice. It’s so simple, but learning this concept literally changed my life.

The thing you do first always gets done. So if you want to write, but work, family, chores, exercise, and every type of procrastination known to man have kept you from the task, then just re-prioritize and get the writing done first. Or as close to first as you can.

Once I started embracing this idea, I began getting out of bed and heading straight to the writing desk. A bathroom break or food break will probably be necessary in there somewhere, but when I stopped checking my email or my phone’s notifications or social media first, it’s amazing how much writing I got done.

I would get a few hundred words before my stomach began grumbling too loud to hear my own thoughts. And postponing that shower until after I completed my chapter made it a delightful reward.

This may require waking up a bit earlier than everyone else in your home, which may also require going to be earlier, but even if you only eke out an additional 15 minutes a day—when you do it first, it always gets done!

I don’t recall when I first heard of fast drafting, but it was some time after I realized that I needed to let go of the idea that my first draft would be anything but a mess. The famous and inspiring essay by Anne Lamott, “Shitty First Drafts” from her book Bird by Bird drove that home, but I soon realized that not only should my first draft be shitty, it should also be written as quickly as possible.

In my early days as a writer, I would slog through first drafts and never make it through the entire manuscript because I spent so much time on the opening. Of course, the beginning of a novel is extremely important, but it’s moot if you never write the end.

However, once I realized that I needed to turn off my inner editor and tap into my brain’s  “flow state” and just write without considering the outcome (too much), then I could keep writing all the way to the end of a project. Only then would I allow myself to edit.

Revisions and editing take about two to three times as long as the first draft did to write. But that’s where the magic happens. Where I take the mess and make it into a real book.

3. Know what you plan to write before you start.

This was another game changer for me. All praises due to Rachel Aaron’s seminal blog post which spawned the book  2000 to 10,000 in which she outlines a technique that many writers have used to change their entire lives. It’s yet another very simple tip that makes you want to thunk your head on your desk when you find out how much it helps.

Before I sit down to write, I plan out the scene in my head first. Then I write down the elements of the scene on a notecard and put it in front of my keyboard for reference. This helps in two ways, I know where I’m going, and I can see ahead of time if the scene works or if it needs additional conflict. I don’t have to write the whole thing before I realize it doesn’t belong in the book at all, or is just full of characters talking to one another with nothing happening.

4. Be Like Kenny Rogers and Know When to Fold ‘Em.

When are you done? This is a question I get often from newer writers. These days, I know I’m done when the deadline from my editor hits, but if you’re writing without a deadline, then you have a bit more leeway. My advice is to work on your manuscript until you’re vaguely sick of it, or reasonably happy with it, and then seek outside help.

Depending on the stage of your career and the publishing path you’ve chosen, this might be a critique partner, an alpha or beta reader, an editor you’ve hired, your agent, or your acquiring editor at a traditional publisher.

Once you get feedback, then revise the story until you’re even more sick of it or more happy with it.

5. Take all advice with a grain of salt.

We’re all different, and that’s a beautiful thing. But it means that some writing advice from experts will just not work for you. I can’t imagine writing without a detailed outline, but my friend, author and fellow podcaster Jeffe Kennedy writes beautiful books by the seat of her pants without an outline in sight. So always remember that it’s good to try something new, especially if the old ways aren’t working for you, but everything isn’t for everybody. If anything I’ve suggested doesn’t work for you, feel free to ignore it. No offense taken.

These are my top 5 writing tips! I talk about process, writing craft, my ups and downs as an author at more on my podcast, My Imaginary Friends. A great episode to start with is: Episode 93: First Draft Woes: https://lpenelope.com/2020/11/first-draft-woes-my-imaginary-friends-episode-93/

L. Penelope is the award-winning author of the Earthsinger Chronicles. The first book in the series, Song of Blood & Stone, was chosen as one of TIME Magazine’s 100 Best Fantasy Books of All Time. Equally left and right-brained, she studied filmmaking and computer science in college and sometimes dreams in HTML. She lives in Maryland with her husband and furry dependents. Visit her at: http://www.lpenelope.com.