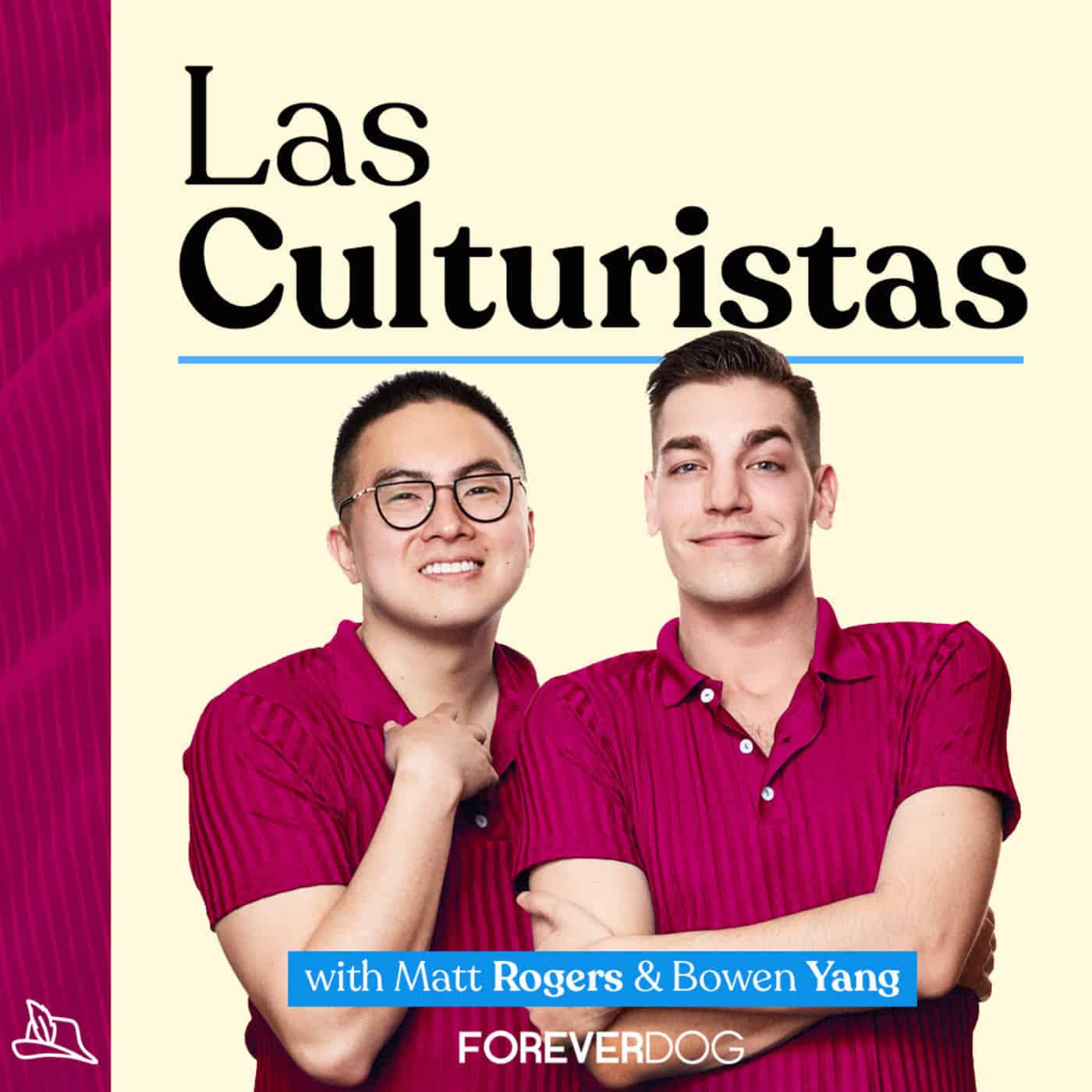 The birth of my love for Las Culturistas actually came from the death of another podcast.

One of my favorite pop culture podcasts, Pop Rocket, had just been cancelled and my friend John (also a Pop Rocket listener) mentioned that he was using Las Culturistas to fill the Pop-Rocket shaped hole in his heart and his podcast queue.

Months later, I finally checked out Las Culturistas and was instantly HOOKED!

The conceit of the show is simple: best friends and comedians Matt Rogers and Bowen Yang meet up every week with a guest to discuss the latest happenings in pop culture and the significance that pop culture can hold in our personal histories.

If you’re like me and slept on this podcast, now is the perfect time to get involved and start listening, since it just returned from a hiatus and switched to the iHeartRadio network!

So, what makes Las Culturistas worth adding to your podcast routine?

Bowen and Matt are both professional comedians with backgrounds in sketch comedy, so they’re naturally hilarious. But the host power goes beyond more than recognizing how to craft a good comedy bit.

Both hosts have an obviously deep love for culture, and their tastes and interests overlap and diverge in interesting ways that make listening to their chats a true joy. Over time, listeners become acquainted with Matt’s deep love of theme park culture (especially Disney) or the pieces of childhood play and culture that have stuck with Bowen forever.

Plenty of podcasts can report on culture, but Matt and Bowen’s work is unmistakably rooted in a true love of what they’re discussing and what their guests are interested in.

An Excellent Cross-Section of Guests

While Matt and Bowen are the indisputable stars of their own podcast, I gotta say…the guests they book are usually awesome people who add a special dynamic to each episode of the pod!

When I first began listening to Las Culturistas , I chose episodes with guests I recognized like Julie Klausner (of the acerbic and amazing Hulu show Difficult People) and Ben Platt (from the original cast of Dear Evan Hansen!). Both episodes contained so much wit, love of pop culture, and hot takes from voices I already appreciated.

Now, though, I can expand to other episodes and honestly every single one has been a treat so far! From actors in musical theater to culture critics to comedians, all of the guests have definitely been hand-picked to add some pizzazz to their episodes!

Even if I don’t recognize a guest’s name, I can trust that I’m in for a great listen, because such attention has been paid to showcasing voices that are a perfect fit for the witty banter of the podcast!

The Segments Are Perfection

Each episode of Las Culturistas feels unique, because Bowen and Matt and their guest could cover a wide variety of topics or just get to the center of what matters to them each week. Episodes range from 45 minutes to almost two hours in length! But even with the variety, a handful of segments create a consistent flow to each episode.

*”Rule of culture number…” is a recurring bit that happens at least once per episode. Basically, whenever our hosts say something funny or make a sweeping generalization about culture, they say, “That’s rule of culture number (insert random number)…” and then repeat the funny statement in unison. This bit could get tiresome, but how it always gets me to crack a smile!

*The Question: With each new guest who comes on the program, Matt and Bowen ask the question, “What was the culture that made you say culture is for you?” The answers are SO interesting—from children’s shows to classic movies to musical theater, there’s seemingly no end to the types of culture that have played a role in the development of the show’s guests! I also play along in my head and frequently think about how I would answer this question, which is an added layer of fun!

*”I Don’t Think So, Honey!” is the last big segment of each episode. Each “I Don’t Think So, Honey” is a series of one-minute rants about things the hosts and guests are not appreciating in culture. I’ve heard everything from calling out bad celeb behavior to complaining that Europe just isn’t close enough to the United States during this segment. You never know what you’re going to get, but it’s usually a  TREAT

*And, finally, every episode ends with a song sung by the hosts…usually at the top of their lungs, with no backing track whatsoever

If you’re a pop culture nerd like me who can’t get enough of funny people talking about the media they love, then I wholeheartedly recommend giving this podcast a try!

Erin Phelps is a lover of swoony romance novels, superb television and movies, and splendid comedic podcasts! In addition to writing for Frolic, Erin works at a fun customer service-oriented job at a salon. Sometimes, she can even be found teaching Women’s and Gender Studies at her local college! Her love language is well-constructed pop culture references and her favorite treat is a caramel latte.
All Posts
PrevPreviousExclusive: Highland Sword by May McGoldrick Excerpt
NextJ. Kenner Writes…About Love in the Time of CoronavirusNext