Lori Goldstein on How Silicon Valley’s Treatment of Women Inspired Her Newest Novel!

[Note From Frolic: Our resident YA expert Aurora Dominguez got the opportunity to interview author Lori Goldstein and ask her five(ish) questions. Lori’s novel ‘Screen Queens‘ is out now!] 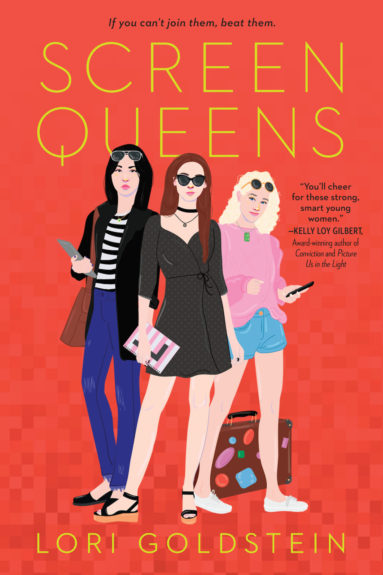 Lori: I’m most inspired by the real world, and as an avid fan of the podcast “Startup” and reader of all the latest apps and new companies cropping up daily, I was fascinated by the world of Silicon Valley and especially by how women are perceived and treated. While I’m not a developer myself, I have done some light coding in previous jobs and worked as an editor and writer for high-tech publications, so I was immersed in it in a different way. I am ashamed to admit that I was one of those young girls who dove into English and writing headfirst and eschewed math, computers, and science. And yet now, that world fascinates me. Screen Queens and the young ladies with the confidence I didn’t have are my way of living vicariously and getting a do-over.

Thanks for not asking about my favorite character, because that is an answer I would not be able to give! I adore Lucy, Maddie, and Delia equally but for very different reasons. Those reasons play into this question of which character I relate to most. Lucy is intensely driven and determined to reach the top, even if that means skirting a few rules and using connections to get ahead. Maddie is an extremely talented designer, but her motivation comes from a desire to care for her younger brother, the only person Maddie’s able to open herself up to emotionally. Delia has a strong sense of family and loyalty with an IQ off the charts, but she lacks confidence and constantly compares herself to others. I see myself in all of these characters. My younger self was closer to Maddie; I was shy as a kid, and friendships didn’t come easily to me. As I got older, that began to change, yet I had many of Delia’s issues of lacking self-esteem, confidence, and just trusting myself. Now, I have Lucy’s drive and determination, but it’s tempered by my history and the pieces of Maddie and Delia still lurking inside. As a team, the three young ladies form a whole, and that’s mirrored in my own life.

Young adult books are tackling issues both in content and in the wider publishing industry that acquires and publishes these books in ways that other categories haven’t embraced as fully. Those changes have allowed more diverse voices to be heard, and readers who didn’t see themselves in books before are slowly starting to now. Young readers are growing up in a world of social media, which has as many positives as it does challenges, as well as in a world where political issues aren’t just abstract ideas, but are affecting their friends, families, and themselves. They are more aware of the world than my generation was at their age, and they are looking for books that don’t shy away from or dumb down this world. Young adult readers are also more open to different genres and to cross-genres, so YA books don’t get as hemmed in as other categories might, which allows for great creativity and some really exciting reads.

The feel of Screen Queens can be described as The Social Network meets The Bold Type. It follows Lucy, Maddie, and Delia as they attend a prestigious high-tech incubator in Silicon Valley where they compete for a sought-after internship. But Silicon Valley has a reputation for not being favorable to women, which the three quickly experience firsthand. As they compete to be the first all-female team to ever win, they have to learn to juggle new friendships, romance, and backstabbers. The book is filled with humor and heart and a whole lot of girl power.

While I can’t give details, I am working on another YA novel with a timely spin on what’s going on in our country with respect to politics and the media.

Favorites—I said I can’t choose favorites!  But as I’m immersed in the world of smart, contemporary YA, two of my favorite authors are Kelly Loy Gilbert whose Conviction and Picture Us in the Light are nothing short of masterful, and Jenn-Marie Thorne, whose most recent Night Music is exactly what I hope Screen Queens accomplishes in terms of showing characters who learn to accept themselves and forge a path forward on their own terms, with a good dose of wit and romance!

Aurora Dominguez is a high school English teacher, college professor and journalist in South Florida. Her work has appeared in The Miami Herald, Where Magazine and J-14 Magazine, all places where she worked as a writer and editor before going from the newsroom to the classroom. Her favorite days are "Caturdays," which she spends with a good book, her husband, Sebastian, and her cat, Luna. Her motto when it comes to reading: "No book left behind!"
All Posts
PrevPreviousDebbie Rigaud: I was like, yup, I’d sooo read that book
NextAll the Reasons to Ship Fred and HermioneNext