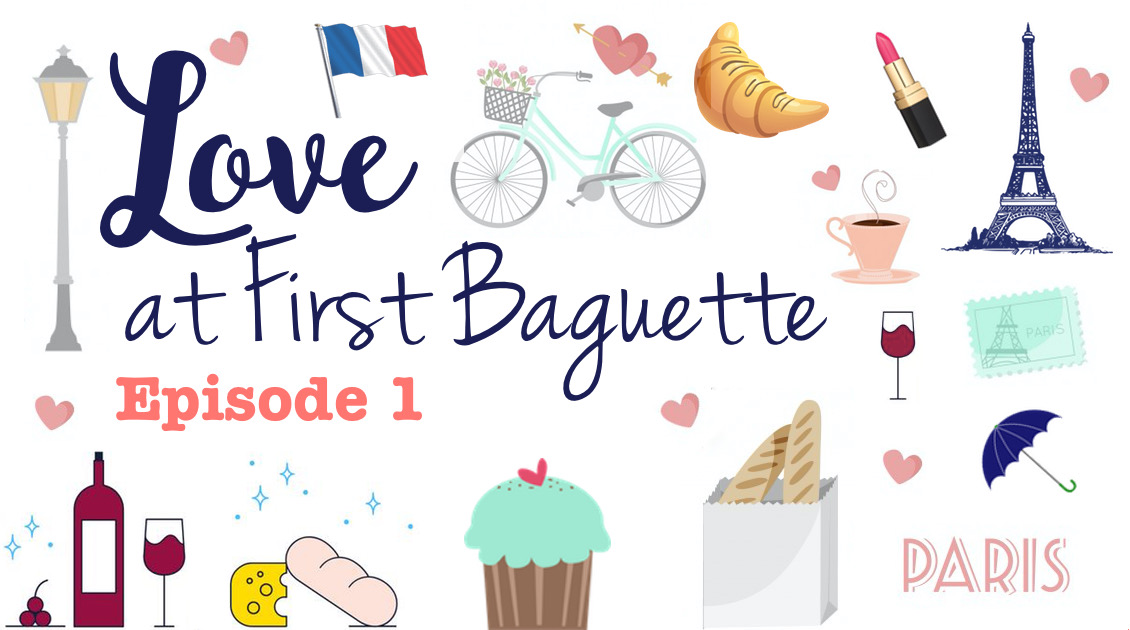 I steeled myself and hit send, confirming my first step toward potential new disasters—online dating.

My roommate squealed in excitement behind me, but nerves shot like arrows through my body. I took a sip of red wine that turned into an accidental gulp and nearly choked. I spluttered and set my glass down.

“That was nice of him to confirm for tonight,” Fleur said, picking up my verre de vin as if it were her own. That was probably for the best. I didn’t need to arrive tipsy for my date with Didier in an hour—if that was even his real name.

How did anyone know what was true on AmourForTwo.com? I could have called myself anything. Marie. Cerise. Barbarella.

We all knew not to believe everything we read on the Internet.

No last names were involved, but I should probably have invented an alias. Besides, no one could pronounce Heather correctly in the entire city of Paris.

“I’m sure he just didn’t want to cross half the city for nothing,” I said. My date had told me he was coming from the Latin Quarter, and we were farther north, on the border of Montmartre.

I glanced out the window of our fifth-floor walk-up, watching the red windmill of the Moulin Rouge slowly turn on the other side of Boulevard de Clichy. Dusk was falling, and the lights were coming on, unapologetically glitzy and calling to the tourists.

I adjusted my blousy top as I turned back to Fleur. “How do I look?”

I’d done the usual: shimmering blush, bronze eyeshadow, lip gloss, and the obligatory mascara. I’d even put a little extra bounce in my chin-length, blonde hair with the help of a fat-barreled curling iron. For the rest, I was wearing high heels, skinny jeans, and a black top—in other words, the Parisian dress code.

“Great.” Fleur touched one of the ruffles draping over my shoulder. “Is that shirt from the boutique?”

“Good choice. Simple. Flirty without being provocative. Here.” She rummaged in our collective jewelry basket. “You need a necklace.”

Fleur motioned for me to turn around and then decorated my neck with a small, Celtic design pendant.

“A l’amour,” she toasted, tipping my glass at me before she finished it.

An hour later, I was questioning my choice of heels as I walked up the steep hill toward Abbesses and the maze of twisty streets in what I considered my neighborhood, even though I technically lived on the other side of the boulevard. I wasn’t keen on breaking my neck in a freak accident of bad balance and usually wore thicker heels. Tonight, I’d gone for spikes. In a moment of paranoia, I’d thought I might have to defend myself against Didier, who could turn out to be a psycho serial killer.

What if I had to plant my spiked heel right in his eyeball before kicking him down a dark stairwell?

I paused and nearly turned toward home. What the hell was I doing, Internet dating?

My mother would gasp in her horrified, Frenchwoman way and say, “Oh là là! Quelle bêtise!” and my father, with good, American gruffness would say, “Tell that boy I have a shotgun if he gets frisky.”

Neither of them technically knew what I was doing right now, since they lived in Boston, where I’d spent the first eighteen years of my life. Fleur’s family was in San Francisco. We were both half French and half American. We’d met as first-year students at the Sorbonne twelve years ago, because studying in Paris had seemed logical when we’d realized there was no affording the colleges we’d wanted to go to in the United States.

I hadn’t technically studied abroad, since I was a French citizen as well as American. But it had been the first time I’d lived on my own—until Fleur and I had moved in together—and the first time I’d been to France for anything longer than summer visits to my maternal grandparents.

Determined to carry through with my evening, I slipped into the café-bistro-bar hybrid I’d chosen in Montmartre. I wasn’t early, so I looked around for someone alone who might have been Didier. I didn’t see any likely candidates, but I did get a friendly hello from Bruno, the maître d’hôtel who ran everything at Chez Phillippe.

I wondered how my date could possibly have been later than I was—punctuality was not my point fort—as I took a seat at the bar to wait for Didier/serial killer/may-have-a-secret-identity-I-had-yet-to-discover.

Chez Phillippe was casual and not too expensive. The dining tables were toward the back, set into a cozy room with rough, sandstone walls that glowed almost yellow in the soft light from the wall sconces. Candles flickered on every table in a little dish next to a small vase with a single red rose. About half the tables were already filled with diners.

The bar, with its row of stools, was toward the front, taking up one side of a wall with a lot of gold trim, glass, and mirrors. Across from it, there was standing room and a smattering of round tables, some of which spilled out onto the sidewalk and were used mostly by smokers.

I liked Chez Phillippe because you could get whatever you wanted. A coffee. A drink. A whole meal. It was versatile, and the people were friendly. It was also close to home. On what was essentially a blind date, I wanted to be within easy walking distance of my flat and not dependent on anyone for a ride back, even if it got late and the metros and taxis turned scarce.

Or went on strike. It was France, after all.

I sat at the bar, worrying my lower lip. What if he followed me home? Found out where I lived?

Was I overthinking this?

The bartender sauntered over. I’d never seen him before, and Fleur and I came here a lot. That was another reason I’d chosen Chez Phillippe. I knew I had friends here who would come to my rescue.

Only I didn’t know this guy. He was tall and rather broad for a Parisian. Frenchmen tended to be kind of slight in general—something I found unappealing, even though I shouldn’t really have judged, considering my own slim, five-foot-two stature. It was probably something bred into females at the genetic level, left over from when we were still living in caves and grunting out monosyllables. Small woman likes big man. Bring me food. Club my enemies. Make me fire.

The new bartender’s dark-brown hair brushed his ears and collar, and a friendly smile curved his lips when he saw me, making his blue eyes crinkle. Mon Dieu. He even sported a sexy five o’clock shadow.

He moved to fill my order, and I watched him in the bottle-lined mirror behind him. Crisp, white shirt tucked in at his tapering waist. Brown leather belt. Battered blue jeans.

My hormones kicked in with a vengeance.

He brought me my drink, setting the wineglass on a little round coaster.

“Are you meeting someone?” he asked in French. “Un rencard?” A date?

“Because that might be him.” He tipped his head toward the front window.

I turned so fast a nerve pinched in my neck, and I winced.

The bartender chuckled. “That bad, eh?”

“No!” I rubbed my neck. “It’s just…” I squinted out the window. I’d only caught a glimpse of someone, and now he was gone.

“Did he leave?” I asked, indignant.

“He took one very long look at you and ran away.” The barkeep smiled.

My jaw dropped. “C’est pas vrai.” I couldn’t believe it.

“What’s so funny?” Didier the possible liar/serial killer/spy had just taken off without even meeting me?

“Vous dînez quand même?” The guy handed me a menu, asking if I was having dinner anyway.

“Tu,” I said absently. I was on informal terms with everyone here. Chez Phillippe was practically my home away from home.

“Why would he do that?” I asked in English, talking more to myself than to the man behind the counter.

He set a basket of chunkily sliced bread in front of me. “He was scared. Intimidated,” he answered in slightly accented English. “Next time, try not to look so pretty.”

I broke off a piece of baguette and popped it into my mouth as he moved down the bar to serve another customer. Then I flushed. Had he just called me pretty?

I washed down the bite with a sip of red wine and then pulled out my phone to call Fleur.

She answered on the first ring, sounding panicked. “Are you okay?”

My chest squeezed tight. Friends were the best. “Hey, love. He stood me up. Want to have dinner?”

“I’ll be there in ten minutes. Just let me record The Bachelor.”

I slid off the bar stool, taking my bread and wine, and went to claim a table. Bruno waved me over to my favorite corner and put an extra rose in the vase next to the candle.

I smiled in thanks, and his dark eyes twinkled.

I’d been signed up for ten days and already had about two hundred emails in my AmourForTwo inbox. I’d sort through them during the week and maybe fiddle with my criteria. More selective. Fewer cowards.

Something would work out eventually. Right now, I had a date with my best friend and roommate.

USA Today bestselling author Amanda Bouchet grew up in New England and studied French at the undergraduate and graduate levels, first at Bowdoin College and then at Bowling Green State University. She moved to Paris, France, in 2001 and has been there ever since. She met her husband while studying abroad, and the family now includes two bilingual children, who will soon be correcting her French.
All Posts
PrevPreviousFive Reasons Why LeBron James Is A Real-Life Romance Hero
NextHow To Engage With Followers To Grow Your BookstagramNext