‘Love At First Baguette: The Final Episode’ by Amanda Bouchet 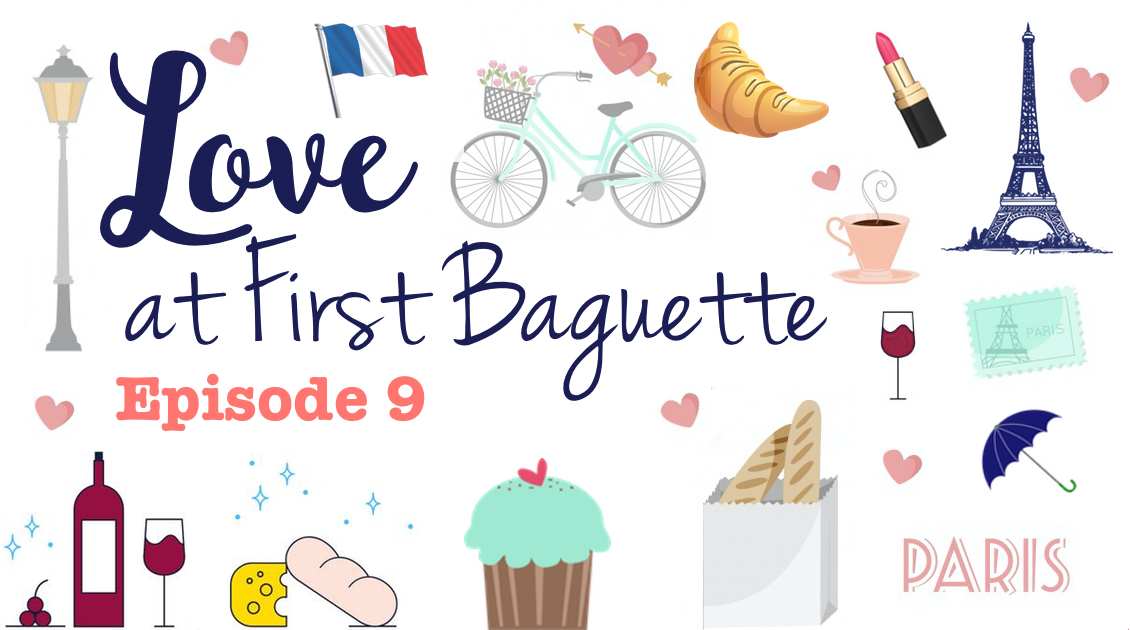 A week after the art show, everyone at Chez Phillippe was celebrating Adrien’s success. Technically not everyone, I supposed. The restaurant was open for business, as usual, but it was mostly filled with regulars, and Adrien had taken the night off, so he wasn’t behind the bar. Instead, he was on my side of the long, gleaming counter and sitting right next to me, the outside of his jean-clad thigh brushing mine whenever one of us moved. As the evening progressed, I started craving the light, not-quite-accidental contact until it was all I could think about, my body temperature fluctuating between volcanic and about to go supernova. It was perfect.

Margot, an alternate bartender I didn’t know well, was serving drinks, and Bruno brought out champagne that he insisted on providing at the same price the restaurant paid its supplier. It was a fantastic party, made even better by the excitement of a potential something with Adrien.

My heart bounced crazily when our eyes met. He leaned toward me, his voice a deep rumble in my ear. “J’ai un cadeau pour toi.”

He had a present for me? My chest squeezed tight, and anticipation stole my breath. “Ah, bon?”

He nodded, a half smile curving his lips. “I’ll show you. It’s in the back of my van.”

“That’s the worst pick-up line I’ve ever heard,” I teased, trying to keep what felt like a wild smile under control.

Adrien chuckled. “You’re right. That could be misinterpreted. Let’s try again: I have something for you in my van. I promise I’m not a serial killer.”

I cracked up. “Infinitely more reassuring.”

“So, what’s this present?” I asked, setting down my champagne glass.

“Une surprise.” He twined his fingers through mine, stood, and tugged me off the bar stool, his blue eyes warm with humor. But there was more than humor in his expression. There was intent, a focus that had my insides jumping with excitement and sent heat billowing through my middle. “Viens.”

He asked me to go with him, and I didn’t hesitate to follow.

Adrien handed some money to Margot to cover our drinks. I tried to pay for my portion, but he waved away my offer. I caught Fleur’s eye, so she’d know I was leaving. She saw my hand in Adrien’s and gave me a look that probably only I could interpret. It was part You cheeky wench and part Drop your panties asap. I had to bite my lip to keep from laughing.

Outside, Adrien led me to a small, white van that looked like a zippy little delivery vehicle.

“Glamorous,” he said, gesturing toward the van with a self-deprecating smile.

“Très chic,” I agreed, my nod as serious as three glasses of champagne would allow.

“I have a motorcycle, but that’s no good for moving supplies or making deliveries.”

I nodded, but my mind had snagged on motorcycle and was already conjuring images of Adrien and me on weekend getaways, zooming along country roads, the air pounding at the leather clothing I was so going to buy myself and my arms wrapped tightly around Adrien’s waist, my cheek pressed against his broad back.

Mon Dieu. We hadn’t even kissed, or been on a date, and yet here I was, already picturing us as a couple taking trips.

In the interest of sanity, I tried to slow down my imagination, but everything about the scenario just seemed so right.

Adrien unlocked the back of the van and reached for a box. It was half the size of me and wrapped in shiny gold paper with a big red bow.

“Wow. You really do have a present for me.” My heart beat with such furious happiness that I could feel my pulse pounding in my neck.

As if he could sense my rushing blood and wanted to feel it, Adrien curved his hand around my nape and gently tilted my head back.

“Joyeux anniversaire,” he murmured, looking down at me. His thumb traced the line of my jaw with a warm sweep of work-roughened skin.

“It’s not my birthday,” I whispered.

“It’s not a happy birthday,” he answered. “It’s a happy anniversary.”

His words could mean both, but I didn’t understand.

He dipped his head toward mine. “Of our first kiss.”

He gave me time to pull away, but there was no way I was stopping him. If he hadn’t made a move like this, I would have done it myself before the night was out. I eased my hands around his neck, into his dark hair, and leaned into him. I’d wanted this kiss for weeks.

Our lips touched, a light brush that turned into a harder press and then into something scorching and wonderful that echoed through me, reaching all parts. This was a kiss. The kind of crumble-to-ash, melt-into-a-puddle, can’t-live-without kiss I’d been waiting for my whole life. The kind that turns you needy and greedy and willing to give up a chunk of your soul for tomorrows just like this.

Maybe it was okay to give up a piece of yourself when you met the right person, because what you got back kept you whole.

I think about you day and night. His words were a caress in the darkness that made me shiver.

“I’ve seen only you since the day you handed me a basket of bread and told me my blind date had run off because I looked too pretty.”

Adrien’s fingers whispered against my temple, lightly brushing my hair back. “Tu es plus que belle.” You’re more than beautiful.

My breath caught at his compliment. Sculpting scrap metal and wood into household objects wasn’t the only thing he did well.

My eyes snagged on the box. “My present?”

Smiling, he handed me the box. “You’re impatient.”

“Curious,” I corrected. It was surprisingly light for such a big box.

He helped steady the box while I unwrapped it. Inside was the lamp I’d loved when Adrien first showed me his artwork.

“It’s wonderful.” A hot sheen coated my eyes as I touched the delicate sprays of metallic leaves climbing the sides of the lamp. The box was enormous because he’d also provided an elegant, off-white lampshade with a swirling design that was so subtle it was almost imperceptible. “This is the best gift I’ve ever gotten.”

Adrien looked genuinely surprised at that, and I realized he was far too modest about his own talent. I vowed to make sure he understood how amazing he was, what an unusual and wonderful skill he had. I doubted he’d be bartending for long. His calling was turning industrial leftovers into stunning and useful works of art.

“Bien sûr.” Of course. He closed his van, took the lamp in one hand, my hand in the other, and then Adrien walked me home.

Fleur gave me a crushing hug. “I can’t believe you’re moving out.”

“I’ll only be a fifteen-minute walk from here,” I said, squeezing her back.

She sniffled loudly. “It won’t be the same.”

No, it wouldn’t be. And I couldn’t help crying a little myself. It was the end of an era. And the start of a new one for me.

Adrien arrived at the top of the stairs again, not even winded from the several trips he’d already made up and down today. He grabbed the last of my boxes and started down the steps again.

Fleur watched him leave. “You’re moving in with possibly the nicest, hottest, and most talented guy in Paris. I’m so happy for you.” Her voice wavered, and she tore a tissue from the box on the counter, wiping her eyes.

I hugged her again. I was close to a breakdown myself. “I’ll miss you.”

“I might try Amour For Two dot com,” she said, eventually pulling back. “Look what it got you.”

I laughed, but she was right. In a roundabout way, the dating website had brought me to Adrien.

“Maxime was nice. I could try to set you up,” I offered.

Fleur made a face. “Sure. In your spare time.”

I would be busy. I’d already set up a website for Adrien that reflected his personality and artwork, and he was swamped with orders. So much so that I’d found us retail space in the trendy République area for a shop/showroom, quit my job at the boutique, and was about to start managing a store full of Adrien’s creations. We were all set to open next week.

But I’d always have time for Fleur. “Come by for drinks tomorrow at seven.” I texted her the door codes to Adrien’s building.

No, to our building.

I grinned, loving the sound of that.

I added BFF XOXOXOXO to my text to Fleur, and she chuckled when her phone buzzed on the counter next to her and she saw it.

Fleur hugged me again. “I love you, too.”

“Should I be jealous?” Adrien asked. The gleam in his eyes teased me from the doorway.

“Take her away before we both start crying again,” Fleur said, shooing us out into the hallway.

I left the home I’d shared with Fleur for years, nostalgia heavy in my heart, even though I bubbled with excitement over my future with Adrien.

“Ça va?” He squeezed my hand, asking if I was all right. My engagement ring pressed into my finger under his grip, reminding me that ahead was the only way to look.

His smile felt like sunshine on my face, a welcome warmth when everything else in Paris was the cold, dull gray of late winter. The sky spat ice, but I didn’t shiver as we walked toward the van packed with everything I owned that wasn’t already in my new home. I was too filled with the zinging heat of happiness and anticipation to feel chilled, despite the weather.

On the sidewalk, Adrien kissed me until I swayed on my feet and had to count on his strong arms to hold me up. “Je t’aime aussi.” He loved me, too.

And as he opened the door for me and helped me up into the van, I knew he would prove it over and over for the rest of our lives. After all, we both agreed that it had been love at first baguette.

USA Today bestselling author Amanda Bouchet grew up in New England and studied French at the undergraduate and graduate levels, first at Bowdoin College and then at Bowling Green State University. She moved to Paris, France, in 2001 and has been there ever since. She met her husband while studying abroad, and the family now includes two bilingual children, who will soon be correcting her French.
All Posts
PrevPreviousYou’ve Always Been Curious, It’s Time To Dive In: Where To Start With Erotica
Next11 Ways Becoming a Bookstagrammer Changed My LifeNext