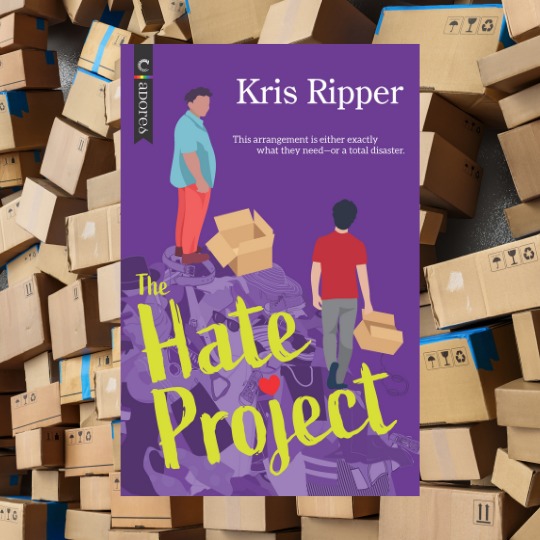 We are so excited to bring you this exclusive excerpt from The Hate Project by Kris Ripper!

Take one anxiety-plagued grump recently laid off from his job, add one prickly frenemy with whom he had a one-time-only pity bang, throw in a massive decluttering endeavor, and you get The Hate Project. What Oscar needs: a stable job (oops, that’s gone now); a stable no-strings, no-feelings sexual arrangement that lasts longer than fifteen minutes (so far no luck); and his friends to stay out of his business (and stop sending him freaking emojis). What Oscar gets: a complicated job sorting through other people’s belongings; a some-strings arrangement that provokes way too many feelings he can’t totally deny; and the addition of an overbearing someone-else’s grandmother to his close circle of overbearing friends. Guys like him don’t get happy endings—or do they?

About The Hate Project:

Oscar is a grouch.

That’s a well-established fact among his tight-knit friend group, and they love him anyway.

Jack is an ass.

Jack, who’s always ready with a sly insult, who can’t have a conversation without arguing, and who Oscar may or may not have hooked up with on a strict no-commitment, one-time-only basis. Even if it was extremely hot.

Together, they’re a bickering, combative mess.

When Oscar is fired (answering phones is not for the anxiety-ridden), he somehow ends up working for Jack. Maybe while cleaning out Jack’s grandmother’s house they can stop fighting long enough to turn a one-night stand into a frenemies-with-benefits situation.

The house is an archaeological dig of love and dysfunction, and while Oscar thought he was prepared, he wasn’t. It’s impossible to delve so deeply into someone’s past without coming to understand them at least a little, but Oscar has boundaries for a reason—even if sometimes Jack makes him want to break them all down.

After all, hating Jack is less of a risk than loving him…

Jack allowed me to drag him into the hallway, but once we were outside his door (Jack Attack Lives Here) refused to move. “What the fuck, Oscar? It’s not really the time for a quickie.”

“Oh, don’t flatter yourself. You’re being a prick to my friends, who are trying to be your friends, so fucking quit it.”

“I didn’t ask anyone to come here and do this!” he shot back.

“Because you suck at accepting help, good for you, join the club, but you obviously need it, so maybe stop being such a dick about it. Or—” I realized I was being Way Too Loud “—or call someone else to do this, but you can’t do it yourself, asshole. You’re gonna have to figure it out one way or another.” I stood there, waiting for him to bite back at me.

Jack sighed. “My grandmother wants to come for dinner. I…misled her a bit about how much progress I’d made with the house and now she wants me to bring her over. But if she sees how I’m living…”

I had no idea what to do with dejected Jack. “Uh.”

“Jesus, Oscar. Don’t fucking try to be nice to me.”

He huffed a laugh. Or at least a huff. “I know everyone’s trying to help. I’ll work back here so they don’t have to deal with my mood.”

“Right. Good. Yeah. Okay then.” Since there was nothing else for me to say I turned and went back to the living room. “Jack’s going to spare us his dubious company,” I said loudly enough for him to hear.

From the hallway I heard another huff, this time more pronounced.

We called lunch around two and ordered pizza over an app, which was a thing I had to do more. I loved eating takeout, but I hated calling to order it. When the pizza arrived and he was still MIA, Dec nudged me to go tell him.

I found him surrounded by new piles. He looked at me, and maybe it was the effect of the dust or the old lighting or whatever, but he seemed a lot more pale than he had before. “You should eat some food.”

“I have no appetite.”

“And yet you should still eat some food.” I hesitated. “The living room…kind of looks worse, fair warning. You might go out through the garage.”

So of course he went through the living room. “You weren’t joking.”

“My jokes are funnier than that.”

He reached out as I went to pass him, not quite touching my arm but I stopped walking anyway. “Do you think, if all of us work together, we can make this room presentable today? I want to be able to bring her home for dinner this week.”

The place was wrecked. The pile of “we aren’t sure what to do with this” was growing. And it was going to need a serious deep-clean before any immunocompromised old people sat in it. If I was a glass-half-full guy, I would have assured him we could do it.

I’m not a glass-half-full guy. “Not likely.”

He called me maybe an hour after I got home that night. Long enough for me to have taken a shower and put a frozen lasagna in the oven, but not long enough for it to have cooked all the way through.

I didn’t answer, so he left a voicemail.

“It’s Jack. Declan explained his master plan to me after the rest of you left, and if you want a job, I want to hire you.” Pause long enough that I thought he’d hung up. “And anyway, there’s always the potential for more sex. Call me back if you’re interested. Or text, whatever.”

I probably wouldn’t have done it if it wasn’t to avoid Dec harassing me about it.

I probably wouldn’t have done it if it wasn’t for the lukewarm offer of more sex, which I was lonely enough to find acceptable.

I probably wouldn’t have done it if it wasn’t for that last line, since I hate phone calls and would have never called him back.

I texted: As long as I get a bonus for dealing with your moods.

He texted back: The bonus is me not firing you for gross insubordination.

And just like that, I kind of had a job.

Kris Ripper lives in the great state of California and zir pronouns are ze/zir. Kris shares a converted garage with a kid, can do two pull-ups in a row, and can write backwards. (No, really.) Ze has been writing fiction since ze learned how to write, and boring zir stuffed animals with stories long before that.

Where Romance and Pop Culture Live Happily Ever After.
All Posts
PrevPreviousMy 5 Favorite Books Set in London by Karen White
NextTips, Tricks, and Tech for Writing Solo and in a Group by Cate HolahanNext