Meet the Bluewater Billionaire: Cameron Whitbury of The Mogul and the Muscle 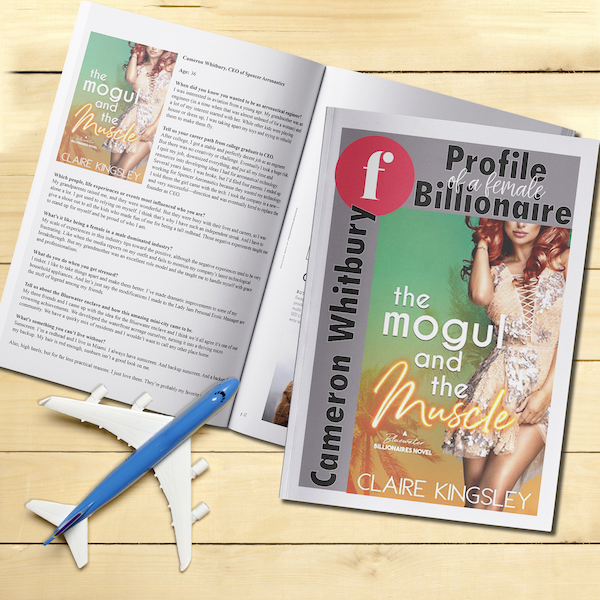 I’m thrilled to feature Claire Kingsley’s latest must-read romance, The Mogul and the Muscle, which is the second installment in the Bluewater Billionaires series, which includes four, standalone books by Kingsley, Lucy Score, Kathryn Nolan and Pippa Grant that feature heroines who are best friends and billionaires.

We’re featuring all four of the books on Frolic as they release and profiling the uber-successful heroines. Allow me to introduce you to Cameron Whitbury, who is the “mogul” of the group. 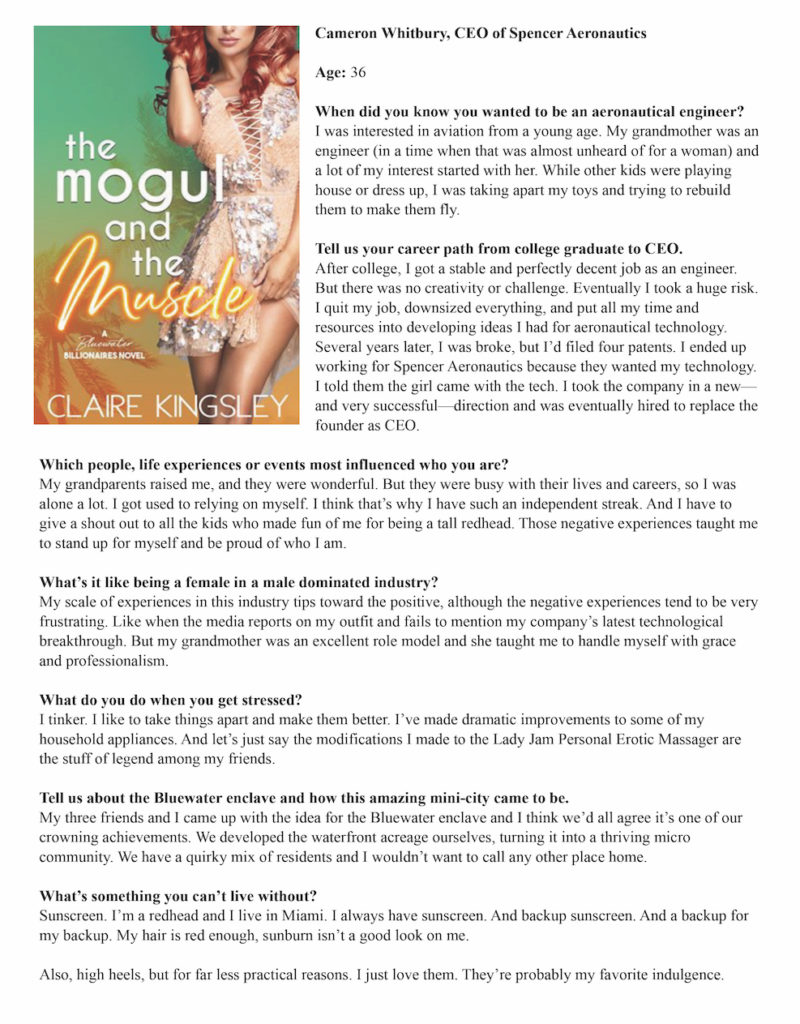 About The Mogul and the Muscle, out now:

“I wanted this man’s arms around me, cocooning me in safety. I wanted to feel like I didn’t have to be brave for a few hours. I wanted to let him be my courage. My protection. My shield.”

Cameron Whitbury—billionaire aerospace mogul—can engineer her way out of any problem. Sure, she’s living with the threat of a potential sex scandal thanks to her lying ex. And that attempted mugging in her parking garage might not have been a random attack.

But she’s totally got this. Sacrifice her privacy to an overprotective bodyguard? No thanks. She doesn’t need a six-foot-five, motorcycle-riding, square-jawed, hazel-eyed man-beast shadowing her every move.

Jude Ellis—one-man security operation and professional problem solver—is ready to retire from the cloak and dagger stuff to live a normal life. He doesn’t need another client. Not even one with coppery-red hair and mile-long legs who looks hot AF in a sexy pair of heels.

To appease her worried friends, Cameron hires Jude as her bodyguard. And despite their feisty banter and their rampant—and totally inappropriate—sex fantasies, they’re both determined to keep it professional.

But as the danger to Cameron escalates, the heat simmering between them just might combust. 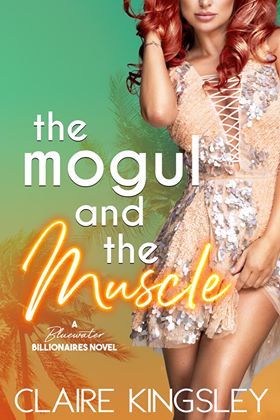 The Price of Scandal by Lucy Score

Mogul and the Muscle by Claire Kingsley

Crazy for Loving You by Pippa Grant (Nov. 8)

Find out more about Claire and her books at clairekingsleybooks.com.​

Mary Dubé is a displaced Texan, former burrito roller and retired number cruncher now living and reading in sunny California. When she’s not adding to her keeper shelf, she can be found teaching indoor cycling, bookstagramming, volunteering and pretending not to hoover over her teenager.
All Posts
PrevPreviousHistorically Yours: Top Historical Romance Picks for October 7 to 18
NextDaily Frolic: We Accidentally Flooded Ben Feldman with Thirst TweetsNext