My Pop Culture Tour Through Anxiety 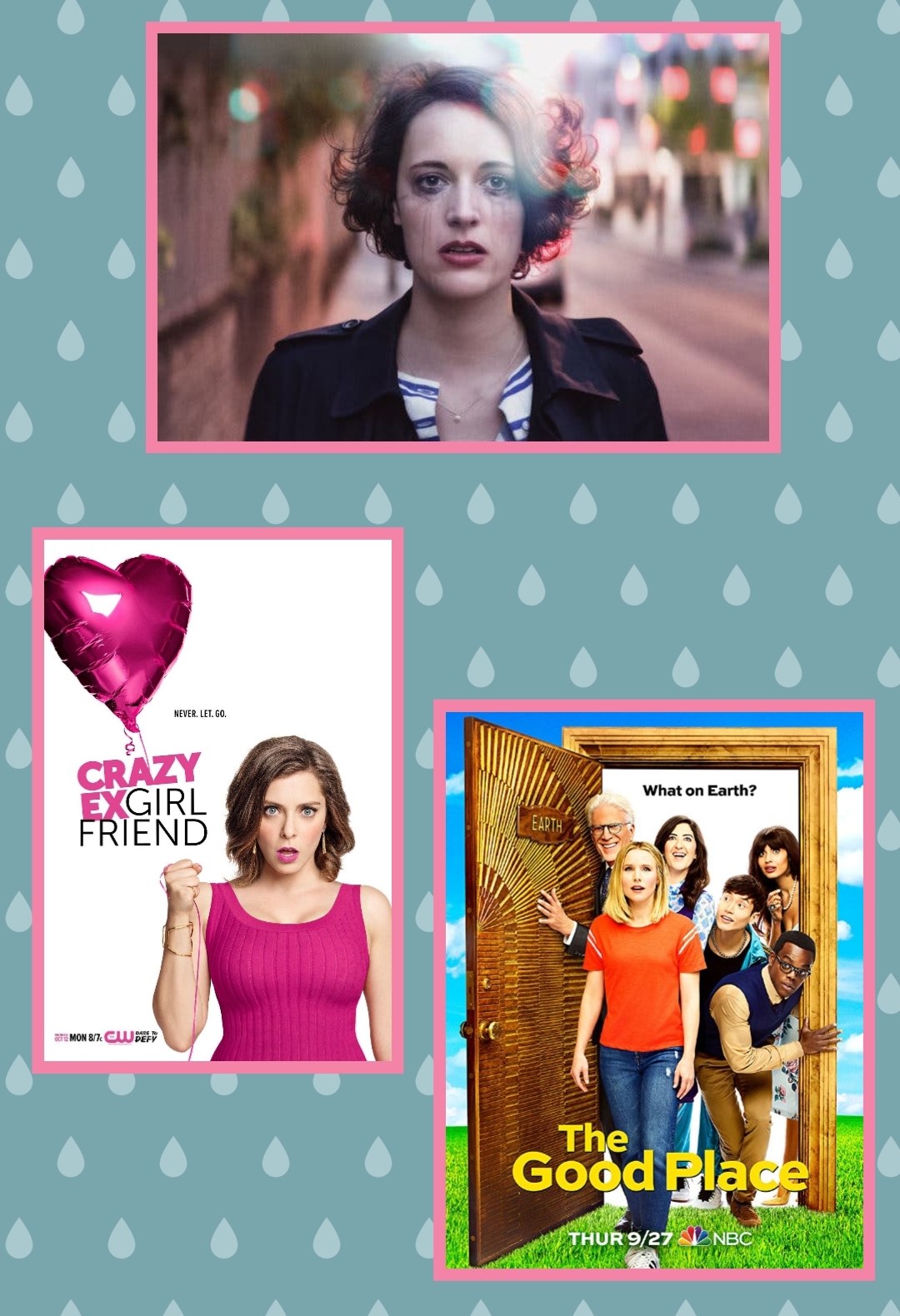 Over a year ago, while watching the very end of the season 2 finale of The Good Place, I had a biiiiiiiig cry. Eleanor, on the brink of giving up her quest to be a better person, sees a video of Chidi lecturing on the topic of “What we owe to each other” and flies all the way to Australia to learn about ethics from him.

Though the end of that season was touching, it probably wasn’t engineered to make people, you know…weep openly while debriefing with their partners.

“It’s just so nice…” I said to my open-hearted husband between gulps and catharsis tears… “to feel like I’m not alone when I worry about how to be good. I’ve worried about it my whole life, and this show makes me feel like it’ll all be okay.”

Though this was a memorable mental snapshot in my personal pop culture history, it was by no means the only time a show made me cry in a surprising moment that made me feel seen.

Since I was young, I have experienced what my mom, best friend and I have called “guilt gut.” This term, which I picked up back in the day from the old WB show 7th Heaven, reflected the way I would often worry about whether I’d done the right thing, whether someone would be mad at me for things I’d said or done, whether I was a good person.

Perhaps you can see what came later. It wasn’t until I was in my late 20’s that I learned there’s another, more specific term for guilt gut.

It’s Anxiety, friends. The other word for guilt gut is anxiety.

Interestingly, as I sought therapy for my anxiety and found language for the way it made me feel, I found myself reflected in some of the television shows that caught my attention.

Before The Good Place validated my personal history of moral quandaries, there was Crazy-Ex Girlfriend. This musical show, which followed the romantic and mental health-related journeys of Rebecca Bunch, provided a rare glimpse into what it could look like to be in my head during the worst anxiety spirals.

“Look at this!” I said (crying, again, of course) to my husband as Rebecca sang a diva ballad to herself called “You Stupid Bitch.”

“This is what it feels like, I swear. When you can’t understand why I’m so worried or upset or mad at myself, this is what it sounds like in my head!” I proclaimed, as Rebecca hurled insults at herself.

Reader, it was a lot to handle. It’s hard enough to confront what happens in your own head, even harder to see the lightbulb go off in your partner’s head while you’re in the midst of trying to crawl out of that anxious pit.

Here’s the cool part, though: as much as both of these shows depict people in the throes of anxiety or at their personal low points, they also demonstrate what it actually looks like to put in the hard work for self-improvement.

In the case of Rebecca on Crazy Ex-Girlfriend, viewers see her journey to accept new diagnoses, mend broken relationships, and pursue what will truly make her happy and fulfilled outside of relationships.

In the last season of the show, I still cried…This time, it was because there were honest depictions of what progress in the face of mental illness looked like. In a joyful tap-dance number that parodies the movie La La Land, Rebecca and her therapist sing that “Antidepressants are so not a big deal!”

But the “do-do-do” scatting of La La Land was replaced with the generic names for antidepressants.

Happy tears streamed down my face this time as I turned to my husband (who is, I cannot stress enough, a real champ in these moments) and exclaimed, “I just heard people singing about the little pill I take every day that makes me feel better!”

Rebecca and I both had journeys to accepting the state of our mental health, and at the end of that tough journey was the promise of feeling more whole without stigma or shame or guilt gut.

In the case of The Good Place, the message was often that it doesn’t always matter how good or perfect you are. The important thing is that you’re trying, and the people around you can help to make you stronger, safer, and better. Eleanor is able to strive for self-improvement because of the community around her. Similarly, the more I was vulnerable with friends and family about my anxious tendencies, the stronger I felt over time.

Meanwhile, Chidi, my chronic-stomach-ache-having guilt-gut-exemplifying pop culture archetype on The Good Place, learns that fixating too much on the question of “how can I be good?” has the potential to rob you of the good life.

Lately, there’s been one more addition to the trifecta of television that puts self-improvement under a magnifying glass. That’s right, folks: I’m talking about the critically-acclaimed, reformed-hot-mess known as Fleabag.

Though I’m lucky to not have some of the particular unhealthy coping mechanisms that Fleabag demonstrates, she still represents another popular culture narrative of a woman who is questioning her choices and trying to create new systems to help her thrive.

In a beautiful moment from Fleabag’s second season, a sexually charged confessional scene becomes an honest moment in which our main character pours her heart out. Even with her general agnosticism and lack of belief in an afterlife, she’s still scared—scared that her worst actions are irredeemable, scared that she hasn’t been able to do the right thing. The musical motif throughout the season is one of penitence: Kyrie Eleison…Lord, have mercy. Fleabag seems to be at home in my pop culture guilt gut club.

Without giving away too much (because I still urge everyone to watch Fleabag before Emmy night!), I will say that the much-lauded final scene gives us the same kind of message that I received from The Good Place and Crazy Ex-Girlfriend: with a lot of emotional honesty and hard work, Fleabag is going to be okay in the end.

It’s fun for me to imagine a head canon in which Eleanor, Rebecca, Fleabag and I are sitting around a table, eating tapas, drinking wine and sharing stories about the tough times we’ve been through and the moments that helped us get better.

Oh, how thankful I am for popular culture that holds a mirror up to complicated women like me and the journeys we go on. Perhaps you’re a member of the guilt gut club, too…in that case, I encourage you to pull up a chair, grab some snacks with us, and take in the stories of these fun and fascinating people. Take heart: They show us it’s going to be alright.

Erin Phelps is a lover of swoony romance novels, superb television and movies, and splendid comedic podcasts! In addition to writing for Frolic, Erin works at a fun customer service-oriented job at a salon. Sometimes, she can even be found teaching Women’s and Gender Studies at her local college! Her love language is well-constructed pop culture references and her favorite treat is a caramel latte.
All Posts
PrevPreviousI went to Tulum to Heal and Came Back with a Book by Marissa Stapley
NextFace Value: “Natural” Beauty, Cosmetic Surgery, and the Woman You’re Not Supposed to Love in Romance NovelsNext