Natasha Diaz: “Color Me In was my chance to write the book I never had as a young person”

[Note From Frolic: Our resident YA expert Aurora Dominguez got the opportunity to interview author Natasha Diaz and ask her five(ish) questions. Natasha’s novel ‘Color Me In‘ is out now!] 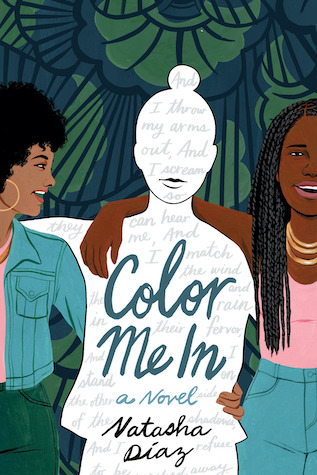 Aurora: What was the inspiration for Color Me In?

Natasha: Growing up, it was hard to find characters I could fully relate to. I looked like a lot of the white female characters featured in books being written for my age, but they rarely had my multiracial and Jewish background, so the physical similarities we shared didn’t do much to draw me in when the worlds and communities these characters were living in were nothing like my own. Color Me In was my chance to write the book I never had as a young person, a book about the white-presenting, multiracial, Jewish experience that did not shy away from confronting the uniquely complicated experience of existing within all those different cultures or the privileges inherent in that identity.

Which character do you most relate to, and why?

That’s tricky because I put myself into a lot of the characters. Of course, I relate to Nevaeh in the sense that we have very similar racial and religious backgrounds. We are also both children of divorce who were forced to have bat mitzvahs (although mine was under a slightly different circumstance), and we are both perceived by the world in a way that does not fully encompass our whole selves, but we were raised differently. Where Nevaeh was sheltered from her multiracial identity, I was raised fully immersed. Where she was encouraged to stay quiet, I was handed a megaphone. I relate to Jordan, one of Nevaeh’s older twin cousins, as well. She calls it like she sees it because she doesn’t see the point in sugarcoating. Jordan is the type of person who you go to when you want to know the truth, even if it might hurt to hear it, which is how I try to be with both friends and family.

Why do you feel books with strong characters are so popular and have such a voice right now?

I think readers want to be able to relate to the stories being told, and that means making characters seem real on the page. The news pummels us with chaos and destruction veiled with mistruths and gaslights the public as if we can’t see the terrible and violent miscarriage of justice affecting marginalized people on a daily basis. I think when people pick up a book, they appreciate something that feels rooted in truth, whether happy or sad, fantastical or contemporary, because, ultimately, books reflect our world back to us and offer us some comfort, reassurance, and truth-telling, which we need now more than ever.

Please describe Color Me In.

Color Me In is a coming-of-age story about a young woman coming to terms with her circumstances, the good and the bad, the confusing and the unresolved, the messy and the imperfect. There is a lot of New York City incorporated into the story, from the language to the neighborhoods to the food, and in a lot of ways the book is a love letter to my hometown. There’s a healthy dose of young love sprinkled in as well. More than anything, I hope readers will find that the book makes them want to take ownership of their identities and their privileges, and emboldens them to engage in difficult and uncomfortable conversations.

I’ve got a few things in the works, but nothing I can talk about just yet! I will say, stay tuned!

Who is your favorite writer right now, and why?

Ah, it’s so hard to choose just one! Right now, two of my favorites are Tiffany D. Jackson (Allegedly, Monday’s Not Coming, and Let Me Hear a Rhyme) and Elizabeth Acevedo (The Poet X and With the Fire on High). They tell stories about people and communities that rarely get a voice. And they do so in a way that is both empowering and engaging in writing that is stunningly beautiful. Definitely check out all their books!

Aurora Dominguez is a high school English teacher, college professor and journalist in South Florida. Her work has appeared in The Miami Herald, Where Magazine and J-14 Magazine, all places where she worked as a writer and editor before going from the newsroom to the classroom. Her favorite days are "Caturdays," which she spends with a good book, her husband, Sebastian, and her cat, Luna. Her motto when it comes to reading: "No book left behind!"
All Posts
PrevPreviousKendare Blake: “My only goal was to hang with these queens and their friends to their ends”
NextLove YA: Top 3 Y.A. Reads for the Week of November 19th!Next