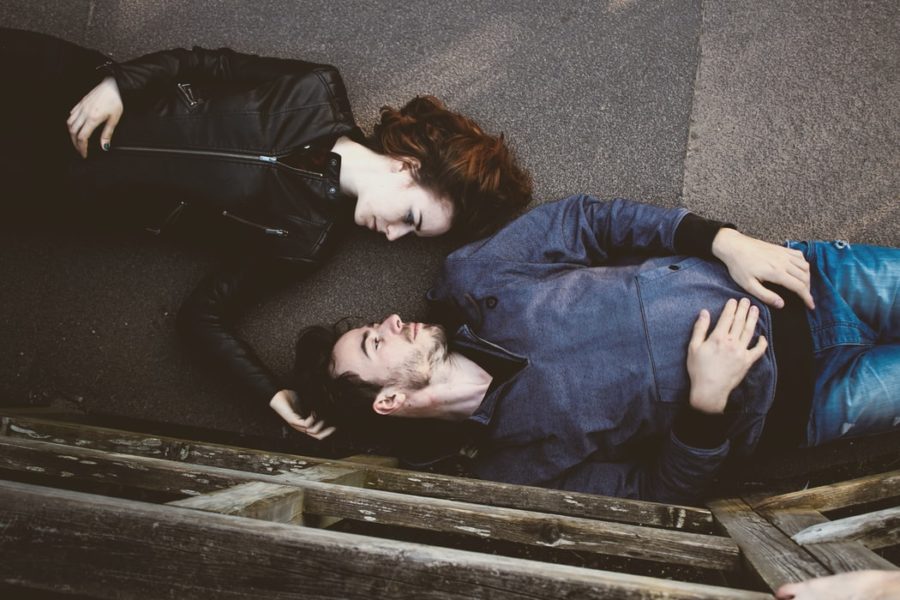 [Note from Frolic: We’re so excited to welcome author Amy Pershing to the site today. She’s chatting all things high school sweethearts. Take it away, Amy!]

In A Side of Murder, Samantha Barnes — once an up-and-coming New York chef until an unfortunate YouTube video went viral — retreats home to Cape Cod, where she finds herself dealing with a falling down house, a ginormous puppy and a job writing restaurant reviews. Oh, yeah, and a dead body. And the town’s new harbor master, Jason Captiva.  Who, it turns out, was Sam’s high school crush.

I happen to be an expert on high school crushes.  I married mine.  At 16, I thought Bill was the cutest, smartest, funniest, sexiest guy in the room.  I still do.  I’m not exactly objective, and I know that the odds of ending up with your high school sweetheart are long, but the advantages, it seems to me, are many.

You learn early on that adversity only makes you a stronger team. Bill and I both had fairly dysfunctional, if loving, families.  When we could not depend on them, we depended on each other.  We had each other, and that was enough. And it is still is.

You have plenty of time before people start asking you when you’re going to settle down and have children. When you meet as teenagers, you have at least ten years to build your career or just have a whole lot of fun.  In our case, Bill and I used the time to travel (including two years in Italy) and find our way professionally.  We didn’t even think of having kids until our early 30s!

And finally, talk about friends with benefits! Right there next to you is your best friend and the cutest, smartest, funniest sexiest guy (or girl) in the room!  How great is that?

So, if I had any advice for Samantha and Jason, it would be to stay the course. Here’s Sam at 17 in a summer waitressing job, mooning over Jason, 21:

I watched him hungrily at his post behind the bar, his long black hair pulled back at the nape of his neck, the muscles of his forearms sliding smoothly under his tan skin as he deftly shucked bivalves and uncapped beer after beer. He was a good bartender, calm and friendly, but always quietly on the alert for the guy who needed to hand over his car keys or stop hassling the girl in the corner.  Though much the same age as his customers, Jason Captiva, it seemed to me, was a man among boys.

For two months I flirted with him with all the subtlety that 17-year-old girls are known for.  Which is to say, no subtlety at all.  I was eager to get better at this new area of study, but Jason was not prepared to be my teacher.

So, with romance off the table, we developed a kind of easy banter, a gentle teasing that grew over the course of the summer into a real friendship.  Everything had been great.

Until that kiss under the deck. The enfolding darkness. Jason’s lips finally on mine.

And then Estelle’s face, gargoyle-like in the flare of a cigarette lighter.  “You’re gonna pay for that, boy.”…

And so it all falls apart for Sam and Jason.  A full decade passes before they meet again. Unfortunately, Sam has just found a dead body in the pond outside the restaurant she is reviewing.  She is cold, and wet, and not particularly attractively outfitted:

… Helene pointed me to the ladies room.

“In you go,” she said, handing me a spare set of the chef’s whites.

I sighed, and did as I was told.  I stripped off my sopping clothes, including bra and underpants, and stepped commando into my borrowed finery. The chef, it seemed, was both much wider and much shorter than I.  The jacket flapped around me like a giant pillow case, and the pants stopped attractively at mid-calf.  A pair of men’s black socks completed the ensemble. Not that I really cared, but I had had a difficult evening and this did seem like the final insult.

I wandered back out to the dining room, carrying my wet clothes. I dropped the mess onto a chair, at which point my bra made a break for freedom and tumbled to the floor. I was just picking it up when the door to the restaurant opened with a whoosh of cold air.

The man framed in the doorway was tall by most standards, though not by mine.   I guessed he had an inch or two on me. He had a wild tangle of dark hair that looked like it had landed on his head rather than grown there. He was wearing khaki pants and a green windbreaker with a patch on the chest that read Barnstable County Harbor Patrol, so I figured he was the fabled harbor master. The hair was probably the result of his trip across the bay in an open Boston Whaler.  He was staring at me, which wasn’t surprising given the clown suit I was wearing and the soggy foundation garment dangling from my hand. He seemed to have forgotten that he was still holding the door open.

“Do you mind closing that?” I snapped. “That is, unless you want your witness dead too.”

That’s what happens when I’m embarrassed.  I get snarky.

The man shook himself a bit and pulled the door shut.  He stepped into the room, using his fingers to comb the hair back off his face.

“Jason?” I squeaked. It is not often that you will hear a tall, strong woman who sang alto in the high school chorus squeak, but I managed it.

His eyes took me in from top to bottom. He seemed to have regained his composure. I wished I had.

He looked pointedly at the soggy bra dangling from my hand, adding, “And so well accessorized.”

“I picked it out specially for you,” I said, grinning at him, although my one overwhelming thought was, Why tonight of all nights did I have to wear my oldest bra?

“I like the new do,” I added, pointing my bra at the hot mess that was his hair.  “Good job on the styled-by-a-Cuisinart look.”

“Thank you,” he said modestly. “It takes me hours.”

And we were back.

It was as if nothing had changed, as if we’d just dropped into our natural banter, our old friendship. This is going to be fine, I thought.

I couldn’t have been more wrong. …

Okay, so things don’t go exactly smoothly for Sam and Jason. But somehow they persevere, precisely because of their early, intense connection.  Because for both of them, the other is still the cutest, funniest, smartest, sexiest guy/girl in the room.

Amy Pershing is a lifelong mystery lover and wordsmith. In her previous career she was the Managing Director and Global Head of Employee Communications at the Bank of New York Mellon. A few years ago (with the final college tuition bill paid!), she waved goodbye to Wall Street in order to write full time. A Side of Murder is her first novel. 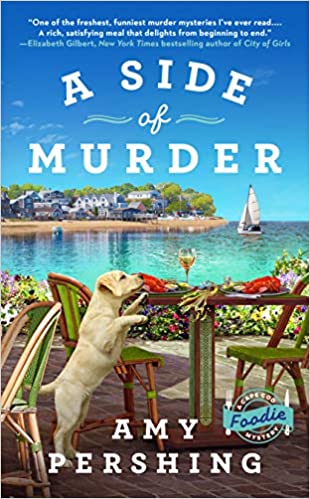 A Side of Murder by Amy Pershing, out now!

After returning to her childhood home, a food writer must investigate the death of an old enemy in this witty and exciting new cozy mystery series.

Samantha Barnes finds herself back in her hometown on Cape Cod, working as a food writer and licking her wounds after her once-successful life as a chef in the Big Apple comes to a shrieking halt. Samantha has inherited her great-Aunt Ida’s dilapidated house, which comes complete with an enormous puppy. Although it’s not exactly a windfall, it might be just the retreat Samantha needs. Until it’s not.

Sam’s new boss—and old friend—Krista is very, well, bossy, and wants Sam to do online video food reviews in addition to traditional print reviews. Her friends Jenny and Miles insist on believing Sam is home for good (she definitely is not), and the town’s new harbor master is none other than her old flame, Jason Lopes.

And then there’s the matter of the body Sam finds in Arey’s pond. The body of the woman who tore Sam and Jason apart ten years ago, Estelle. Everyone says it must be accidental—but Sam is sure there’s something fishy going on. With no one else inclined to investigate, Sam knows it will be up to her to deliver justice.

Where Romance and Pop Culture Live Happily Ever After.
All Posts
PrevPreviousWhy I Put Myself on My Book Covers by Nana Malone
NextExclusive: The Jigsaw Man by Nadine Matheson ExcerptNext