Perfect for Fans of Outlander: The Smuggler’s Daughter by Kerry Barrett Excerpt 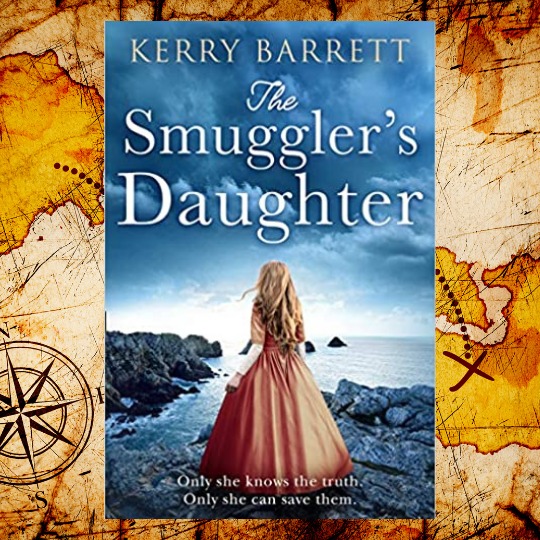 We’re so excited to bring you this exclusive excerpt from The Smuggler’s Daughter by Kerry Barrett! 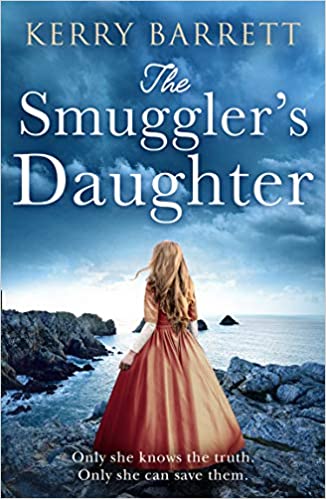 About The Smuggler’s Daughter:

Only she knows the truth. Only she can save them.

1799
Emily Moon lives with her mother in an inn on a clifftop in the darkest reaches of Cornwall. After her father mysteriously disappears, her mother finds solace at the bottom of a bottle, and the only way to keep afloat is to turn a blind eye to the smugglers who send signals from the clifftops. But Emily knows that the smugglers killed her father to ensure his silence, and she will not let his murder go unpunished…

Present day
After a case ends in tragedy, police officer Phoebe Bellingham flees to Cornwall for a summer of respite. But rather than the sunny Cornwall of her dreams, she finds herself on storm-beaten cliffs, surrounded by stories of ghosts and smugglers – and the mysterious Emily Moon, who vanished without a trace over two centuries ago. As rain lashes down around her, Phoebe determines to find the truth behind the rumours – but what she uncovers will put herself in danger too…

As I made my way round the pub, I saw Jed and I felt myself stand up a bit straighter, glad I’d put on a clean top and done my make-up for the evening. He was sitting with the bald man

– Mark – at a table close to the door. I topped up their bowl of crisps, trying to ignore the way my stomach flipped when I saw him, and smiled at them both. But mostly at Jed.

‘Thanks for coming,’ I said.

‘It’s great,’ I said. ‘Better than Liv hoped, I think. Thank you for spreading the word.’

He shrugged. ‘Wasn’t all me.’ ‘We’re grateful anyway.’

‘She looks happier, your mate,’ Mark said, nodding to where Liv was handing a pint to a customer and laughing. He was right. She did look less pinched and worried. ‘She had a right face on her the other day.’

‘She’s got a lot on her mind,’ I said. Mark and Jed glanced at one another.

‘Constant money worries, I reckon,’ he went on.

‘I wouldn’t know,’ I said vaguely. This was a strange chat to be having. I looked at Jed for help, but his attention was on the TV screen.

Behind me, Ewan appeared, holding three pints of lager and making me jump.

Gah, that stupid fib I’d told was going to stay with me all summer. I forced a smile. ‘I’ve taken a bit of time off actually,’ I said. ‘Fancied a change.’

Ewan looked at me, seeming slightly amused. ‘If you need a job, come and see me,’ he said.

‘Oh I think I’ll have enough to keep me busy here actually.’ ‘I was telling . . .’ Mark trailed off.

‘Phoebe,’ Jed said, his eyes still on the football. I looked down at the glasses I was holding and smiled to myself.

‘I was telling Phoebe that it’s a tough business,’ Mark went on. ‘So tough,’ said Ewan, sitting down and pushing the drinks across the table to Mark and Jed.‘Lots of people pack it in because

He looked over to where Liv was standing behind the bar. ‘Is Olivia struggling?’

‘She’s fine,’ I said firmly. Why on earth were they so interested in Liv’s money, I wondered. The odd way the conversation had gone made me feel unsettled. But I pushed my suspicions aside and tried to concentrate on something else.

‘Did you know the family that lived here before?’ I asked. ‘You said you worked with them. Do you know why they left?’

Jed looked at me sharply but he didn’t speak, just turned his gaze back to the screen, even though the football was finished now and most of the other drinkers were leaving. Ewan leaned back in his chair. ‘Why do you want to know?’

I shrugged. ‘Just because we’ve got some of their stuff and I wanted to send it on,’ I said. ‘No biggie.’

Ewan smiled at me. ‘That’s nice of you,’ he said, though somehow he sounded as though it was anything but nice. ‘But no, sorry, I don’t know where they’ve gone.’

‘Maybe it was the ghosts,’ Mark said.‘Maybe they got spooked.’ ‘What ghosts?’ I made a face. ‘Is the pub meant to be haunted?’ ‘Do you want to hear the story?’ Mark looked gleeful and I

felt a flicker of interest in what he had to say.

‘Ooh yes please.’ Liv loved a spooky tale. She pulled up another chair for me and one for herself and we both settled down. Even Jed turned his attention away from the television and on to his friend.

‘I’ve lived round here my whole life,’ said Mark. ‘I grew up with these stories and you might think they’re all rubbish but I reckon there’s some truth in them. I’ve seen things myself that can’t be explained.’

‘Like what?’ said Liv as another group of drinkers left the pub. ‘Goodnight. Take care out there, it’s started raining again.’

‘I’ve heard things, cries and wailing.’ ‘In the pub?’ I said doubtfully. ‘Really?’

‘No, outside on the cliffs,’ said Mark. ‘And I’ve seen strange lights and shadows.’

‘Probably just the local kids having a laugh,’ said Liv.

But Jed shook his head. ‘No one goes on the cliffs. They’re not safe.’

‘I saw people up there this morning.’ There was a footpath that went along behind the pub where I’d seen some walkers earlier, and remarked to Liv that we could do packed lunches for them to make some extra money.

‘And  there’s literally a bus route that goes along the top.’  ‘The road’s fine and the path’s fine, but the grass nearer the

edge isn’t totally stable. You should go no further than the path,’ said Jed quite sternly. I rather liked it. He held my gaze for a second too long and, flustered, I took a mouthful of lager.

Ewan pushed his untouched drink towards Liv. ‘Want one?’

She took it, smiling at him. ‘Thanks.’

‘Get on with the story,’ Jed said crossly. He seemed to be in a funny mood this evening, I thought. Or perhaps that’s just how he was. It wasn’t as though I knew him.

‘There are two stories,’ Mark said. ‘Both about doomed lovers and tragic endings. The first is the tale of Theodora and Diggory.’

I giggled. ‘Sound like the kids in my nephew’s class in West London.’

Mark glared at me. ‘This was hundreds of years ago,’ he said. ‘They’re good old-fashioned Cornish names.’

‘Theodora and Diggory were deeply in love,’ Mark said. ‘But they had to meet in secret because her father didn’t approve. And one night, they plunged to their deaths from the clifftops, just outside. Apparently you can still see the lights from their lanterns as they search for each other on dark nights.’

I shivered, enjoying the spooky story.

‘Years after Diggory and Theodora died, a young woman went missing. The story goes that she had heard the tale of Diggory and Theodora and went exploring on the clifftops to see if she could find any evidence of the doomed lovers. But instead, she too plummeted to her death. At least, that’s what everyone thought, but her body was never found. It’s said that on the nights when the moon is bright, you can see the girl, standing on the cliff. And if the wind’s in the right direction, you can hear her crying.’

A sudden gust of wind threw rain against the windowpane and all of us jumped and then laughed at how creeped out we were. ‘Do you want to know her name?’ Mark said. He was clearly

loving every second of this.

Liv and I nodded in unison and he grinned. ‘Her name was Emily Moon.’

Liv got it straightaway. ‘The Moon Girl,’ she said in delight. ‘She’s the Moon Girl.’

‘She’s who the pub is named after,’ said Mark triumphantly. ‘Not after Phoebe then,’ joked Liv.

The men all looked at me.

I shook my head.‘Phoebe means Moon,’ I told him. I pulled my necklace out with my thumb and showed him the little crescent. ‘It’s why I wear this.’

‘No one knows for sure,’ Mark said.

I shivered, thinking of Ciara. ‘How old was she?’ I said in a small voice.

I looked down into my drink. Poor Emily Moon. ‘It was a long time ago,’ Mark added.

‘So she just vanished?’ Liv asked.

‘The current’s strong here,’ Mark said. ‘Anything that goes in the water at Kirrinporth ends up at Barnmouth. When we were kids we would chuck messages in bottles into the sea and they always washed up two miles down the coast. It’s because of the way the coast is at this part of Cornwall. The current moves east but the way the land juts out . . .’

‘David Attenborough will be turning in his grave,’ interrupted Ewan, rolling his eyes.

‘David Attenborough’s not dead,’ Liv pointed out. ‘And he’s more about the animals isn’t he? I think you need that Scottish fella with the hair. He talks about coastlines. What’s his name?’ But I just wanted to hear more about Emily Moon. ‘So every- thing that goes in here, washes up there?’ I said, trying to get the

conversation back on track.

‘So perhaps she didn’t die?’

‘If she didn’t die, then whose ghost walks along the clifftop?’ said Mark.

Kerry Barrett was a bookworm from a very early age and did a degree in English Literature, then trained as a journalist, writing about everything from pub grub to EastEnders. Her first novel, Bewitched, Bothered and Bewildered, took six years to finish and was mostly written in longhand on her commute to work, giving her a very good reason to buy beautiful notebooks. Kerry lives in London with her husband and two sons, and Noel Streatfeild’s Ballet Shoes is still her favourite novel.

Where Romance and Pop Culture Live Happily Ever After.
All Posts
PrevPreviousPerfect Pairings: Books & Easter Treats
NextThe Top 10 Books of April 2021Next