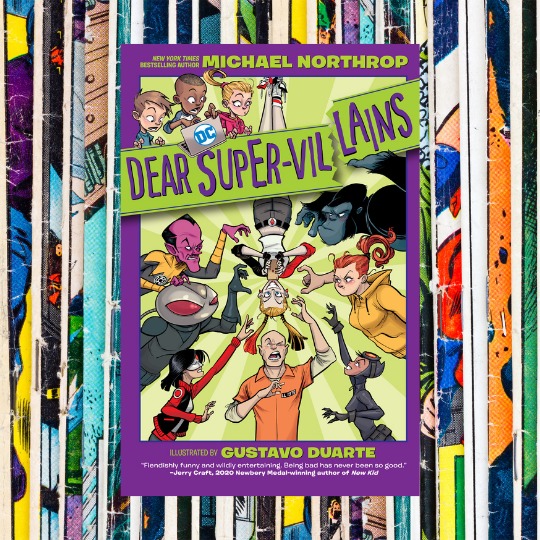 [Note from Frolic: Our resident YA expert got the chance to chat with the author of Dear DC Supervillains, Michael Northrop, and ask him a few questions!] 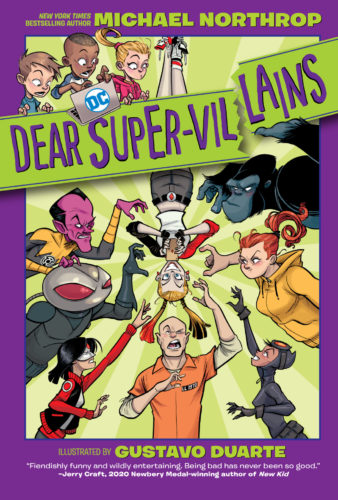 Aurora: What inspired this graphic novel?

Michael Northrop: Well, after telling the heroes’ side of things in Dear Justice League, it seemed only fair to give the villains a shot. Of course, they make a total mess of it, but that’s villains for you. The artist, Gustavo Duarte, and I also thought we could capture something different with this book. It’s that electricity that really good (which is to say, bad) villains bring to the story, that hint of menace and chaos that is fascinating to everyone but especially to kids.

Tell me more about Dear DC Super-Villains. How fun was it to create?

It was a ton of fun. I mean, the villains always have a little bit of an advantage, right? They’re subversive and unpredictable by nature, and those are probably the two most important ingredients of comedy.

Dear Justice League was earnest in a way that people really connected with. It was good people trying their best. Kids writing direct questions to heroes who really searched their souls, and their histories, for the perfect answers. In this book, the kids are more curious, more guarded, and the villains’ effort levels are seriously uneven. And even when they try to say the right thing, they fall short because they aren’t necessarily being honest with themselves.

There’s a ton of dramatic irony in this book because even the youngest readers will understand things that the characters don’t. The villains can be petty or jealous. They don’t communicate or cooperate as well as they should. Kids will recognize that, but it would be a major news flash to the villains. And it was so fun to do that: to just let the bad guys/gals do their thing and trust that it will all catch up with them in the end. (Possibly with a little help from the Justice League!)

Who is your favorite DC Super-Villain?

It’s Gorilla Grodd, and people keep telling me that’s a weird choice, but A) I’m not sorry and B) it’s not even close. Grodd has it all. You think, uh oh, here’s this massive, powerful gorilla. Better watch out. But his powers are mental, not physical. That’s the real danger: mind control, telekinesis, or just this big musclebound dude outsmarting you. It’s such a satisfying misdirection. The danger isn’t that you’ll underestimate him. It’s that you’ll estimate the wrong part! And in this book, we got to do a young Grodd, a sort of origin story. First of all, Gustavo is the perfect artist for it. Second, Young Grodd is basically the perfect middle-grade comic character: He’s a little ape with attitude!

What’s up next for you in the comics and graphic novels world?

I’ve got two more graphic novels coming out with DC that, in classic comics fashion, I can’t talk about yet because they haven’t been announced. They have both been absolute joys to work on, though, and probably saved my sanity during the pandemic. The secrecy is unfortunate but… the villains would want it that way.

I’m also really interested in writing something monthly. I’ve always loved floppies. So I’m putting together some pitches with some really cool artists.

Aurora Dominguez is a high school English teacher, college professor and journalist in South Florida. Her work has appeared in The Miami Herald, Where Magazine and J-14 Magazine, all places where she worked as a writer and editor before going from the newsroom to the classroom. Her favorite days are "Caturdays," which she spends with a good book, her husband, Sebastian, and her cat, Luna. Her motto when it comes to reading: "No book left behind!"
All Posts
PrevPreviousColor-Code Your TBR: Gray
Next9 Gay Romances We’re Looking Forward to This Spring by Jeff Adams & Will KnaussNext