Read an Excerpt from Camille Pagan’s Uplifting New Novel, Don’t Make Me Turn this Life Around 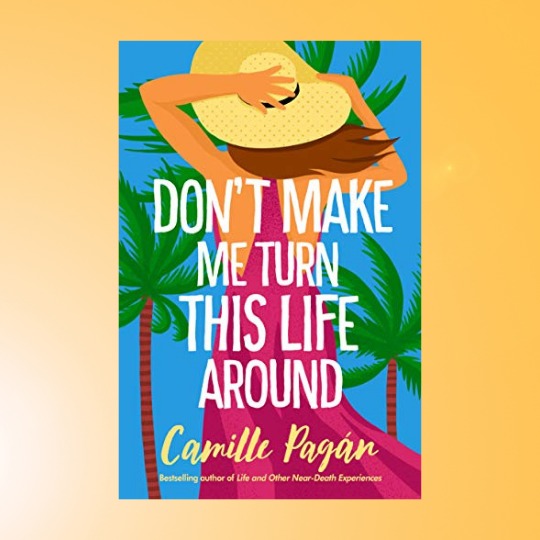 We are so excited to bring you this exclusive excerpt from Don’t Make Me Turn this Life Around by Camille Pagán! 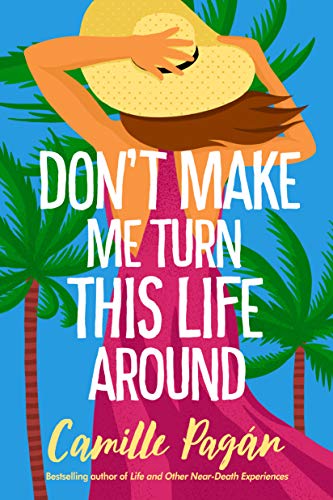 About Don’t Make Me Turn this Life Around:

It’s been thirteen years since doctors declared Libby Ross-Velasquez a goner. Yet here she is—cancer free. So why doesn’t she feel more alive?

Sure, Libby’s husband, Shiloh, has been distant. One of their daughters has a serious health condition. And her father’s death hovers over Libby like a rain cloud. Still, this eternal optimist knows she’s the winner of the existential lottery.

But when her forced cheer isn’t enough to keep her family from catching her blahs, she decides to fly them all to Vieques. The Puerto Rican island is where she and Shiloh fell in love—and where she decided to fight for her life after her cancer diagnosis. Where better to put their problems into perspective?

Then a tropical storm strikes. Libby pretends everything’s fine, even as she fears she’s doomed her family. What she can’t see is that the worst disaster they’ve faced may be the best thing that ever happened to them. But first, they have to get through it.

I won’t say everything happens for a reason; whenever someone said that when I was going through cancer treatment, I wanted to punch them in the mouth, then ask them to give me the reason that’d just happened. As a dyed-in-the-wool optimist, however, I had to believe that getting lymphoma again was a tiny part of some greater plan the universe would later reveal.

Now, technically I hadn’t been diagnosed yet. But dread had been sitting like a stone in my stomach for weeks prior to my biennial checkup. Because I knew—the way you just know the lurker on the subway is seconds from pulling out something you don’t want to see—that it was back.

As my oncologist welcomed me into her office, her outstretched arms were nothing if not a pair of blazing red flags confirming my deepest fears. Then she hugged me so hard I could taste the bagel I’d had for breakfast, which seemed like even more evidence she was about to tell me I wasn’t long for this world.

Except she wouldn’t try to squeeze the stuffing out of me if my torso were riddled with tumors . . . would she?

“Libby, did you hear me?” Dr. Malone, who had sat back down, was staring at me from the other side of her desk.

“What’s that?” I said, blinking hard. I’d just been thinking that if freedom was another word for nothing left to lose, then midlife must be its antonym. At forty-six, I had nearly everything I’d ever wanted: a happy marriage, two delightful daughters, a meaningful career, a lovely home. I’d basically won the existential lottery.

Well, it had been fun while it lasted.

“Congratulations,” she said, beaming at me.

On instinct, I returned her smile. Then I remembered why I was sitting in front of her. I cleared my throat and said, “I’m sorry—why are you congratulating me when my cancer is back?”

She laughed. “It isn’t, Libby! I’m sorry if I slipped into medicalese. To be clear, your scans were spotless. There’s no evidence of cancer anywhere in your body.”

“It’s normal to expect the worst,” she said, but she had a funny look on her face. “Well, for most patients. Are you feeling all right?”

“Fine,” I assured her, because at least my eyes had started leaking a little. I’d live to see my twins, Isa and Charlotte, become teenagers. That was more than my mother, who’d died of ovarian cancer when I was just ten, had been able to say.

“I’m glad, but if you’re not fine, maybe this will help,” said Dr. Malone, peering at my chart, which was pulled up on her computer screen. She looked away from the monitor and smiled at me again. “Your official anniversary is next month, but I think we can safely call this ten years cancer free.”

A full decade. “That’s . . .” I was going to say amazing, but I couldn’t get over the fact that I didn’t feel amazed. In fact, save the couple of tears that had already escaped, I felt . . . kind of underwhelmed, to be honest. “Time flies when you’re still alive,” I finally managed.

“Doesn’t it? I’m so happy for you,” she said, rising from her chair. She came around to the other side of the desk, which was my cue to stand. “This is a big deal, so I hope you find a way to celebrate it.”

Dr. Malone didn’t have to add what I’d already been thinking about in her waiting room: some of her patients wouldn’t have that chance.

“That’s a great idea,” I told her—and because I’m not a sociopath, this time I was the one to initiate the hugging. “Thank you so much for everything.”

“You’re so welcome, Libby,” she said. “I’m glad you won’t have to see me again unless anything changes, but your sunshine will be missed around here.”

I thanked her again and fled before she could figure out that my sunshine was hiding behind a rain cloud.

As I escaped the frigid medical building for the sweltering, overcrowded comforts of Manhattan’s streets, I wondered why I wasn’t hearing birds sing sweet melodies or smiling like a just-burped baby. After all, I was only thirty-four when another doctor all but declared me a goner—but he’d been dead wrong. It took nearly two years of treatment, but I’d gone into remission. Now my lucky numbers had been drawn yet again. Why didn’t it feel that way?

No woman is an island, I reminded myself; I probably just needed to share the news with someone in order to get in a celebratory mood. I ducked under the awning of a flower shop and pulled my phone out of my bag. My husband Shiloh, who was a pilot, was in the middle of a flight, so I’d have to tell him later. My finger hovered over my twin brother Paul’s number, but it occurred to me that he was probably stuck in a marathon of meetings. Anyway, I could let him know when I saw him for lunch tomorrow.

So I called my father. Paul claims that I inherited my rose-colored glasses from my mother, and she was certainly the more exuberant of our parents. But much of my sanguine outlook was owing to the guy who’d done the job of two parents most of my life. He’d always managed to shine a light on a dim situation by sharing a few choice words or a story that started out completely unrelated to the topic at hand, only to reveal itself as precisely on point. Really, he was the first person I should have reached out to.

But his phone had only rung once when I remembered he would not be picking up. Not today. Not ever again.

Now all of the tears that I’d been anticipating in Dr. Malone’s office sprang to my eyes as I remembered that he was dead.

He may be gone, but you are here, I reminded myself, drying my eyes on my sleeve before I descended the stairs to the subway that would shuttle me back to Brooklyn. Rather than wallowing, it was my job to do all the living that my father could no longer do—that’s what he would have wanted. How incredibly lucky I was to still have that opportunity!

Camille Pagán is the #1 Amazon Charts and Washington Post bestselling author of seven novels, including This Won’t End Well, I’m Fine and Neither Are You, and Life and Other Near-Death Experiences, which has been optioned for film. Her books have been translated into nearly two dozen languages. Pagán has written for the New York Times; O, The Oprah Magazine; Parade; Real Simple; Time; and many other publications. Learn more about her work at www.camillepagan.com.

Where Romance and Pop Culture Live Happily Ever After.
All Posts
PrevPreviousBook of the Week: Honey Girl by Morgan Rogers
NextExclusive: Once Upon a Broken Heart by Stephanie Garber Cover Reveal and PrologueNext