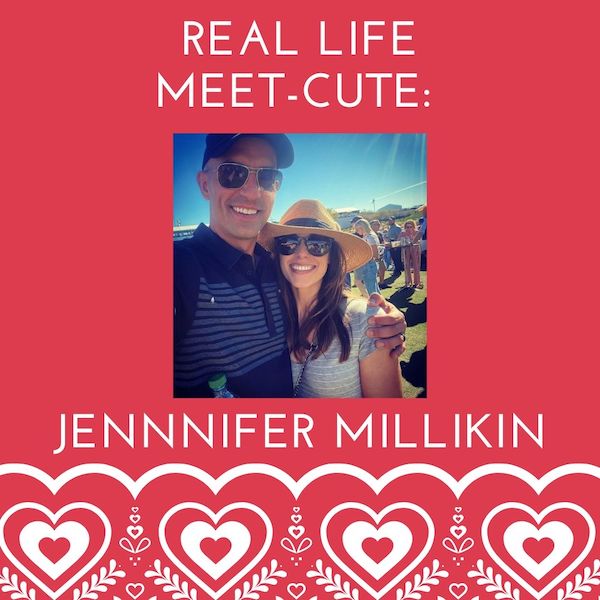 [Note from Frolic: We are so excited to welcome author Jennifer Millikin to the site today. She’ll be telling us all about her real life meet-cute!]

Growing up, I watched Disney princess movies on repeat. I made a mermaid tail and shell bra out of paper, convinced the dark-haired, strapping Prince Eric would appear. If you build it, he will come, right? Uh, no. The only lesson I learned (the hard way) was that paper disintegrates in water.

Still, I held on to my dream of a prince worthy of a Disney movie. And then, one day, I met him. But our meet-cute?

It wasn’t like a fairy-tale. In fact, it’s more like the movie Pearl Harbor. I couldn’t have fathomed it at the time, but our meet-cute was a long time in the making.

Get some tissues. You’ll most likely need them.

I was fourteen when I met Tyler, the guy who quickly became my best friend. He was tall, funny, and had a general disregard for rules. He took me to Burger King for Hershey Sundae Pies, willingly chatted with my grandparents, and taught me to drive. That broken transmission in his Blazer? My fault, even though he took the fall for it. When Tyler told me he was joining the Army, I felt a weightlessness in my limbs. It was just after 9/11, and I’m from a military family, but I was young and didn’t fully understand the danger ahead of my best friend. The time came to say goodbye. The sky was dark, and we stood in the glow of my front porch light. I hugged him, held back my tears, and for the first time in our years of friendship, felt a twinge of something more.

But I kept that feeling to myself.

I’ll always wonder what would’ve happened if I’d told him right away, if I’d let myself surrender to the confusion and wonder of what it meant to see Tyler as a man instead of my friend.

The front door closed softly, Tyler on one side and me on the other. I leaned against it and slid to the ground, sobbing. My dad rushed to me, gathered me in his arms, and said everything experience had taught him to be true. He’s going to fight for his country. He’s a hero. He’s a man now. You have to let him go.

Over the next three years Tyler and I kept in close contact. Hand-written letters, emails, long-winded phone calls (he was a talker!). We kept our friendship platonic, despite both of us having confessed our attraction to one another. We wanted to wait until he was out of the Army. We both knew if we were going to do it, it would be a forever kind of thing.

But forever wasn’t in the cards for us.

Tyler was killed in action in Iraq when a rocket-propelled grenade pierced the armored Humvee he was traveling in.

It’s not easy to describe the pain, the grief, the sorrow that ricocheted through my chest when I heard the news. It was like what tethered me to this world had been severed and everything went dark. I was forced into a reality I’d never asked for. The person who knew my soul no longer existed. How could such a thing even be?

And then, on the day of Tyler’s funeral (my grandparents wedding anniversary!), in walked a man wearing Army fatigues and that ubiquitous cropped hair. He shook my hand and told me he already knew me, had heard all of Tyler’s stories about me. I recognized him from the pictures Tyler sent home. This was Luke, Tyler’s best friend in the Army, a person who spent three years growing Army strong alongside Tyler. They were more like brothers.

Luke and I both spoke at the funeral. We sat together at the cemetery. He was only in town for that one day, but we exchanged email addresses. For the next several months, we wrote one another, sharing funny stories about Tyler. For a person who lived like Tyler, there was never a shortage of stories. Our emails evolved and grew deeper. We wrote about our lives, our feelings, and the struggles of moving on. Our connection was deep and automatic. With Luke, everything felt easier. We went from grieving partners to friends. And when he chose to spend his next R&R in Phoenix, we went from friends to more.

This time, I didn’t stop myself from telling him how I felt. I didn’t hold back when it felt scary, and let me tell you, my feelings were often frightening. We were dipping our toes into uncharted territory.

Luke and I fell in love, the hard and fast kind that takes your breath away and makes your heart beat like a galloping stallion. He was still in the military, and he had to return after his R&R. It wasn’t easy being apart the next eight months until he would be discharged, but we made it work.

And we’ve been making it work for fifteen years now. We have two kids, and a happy, fulfilling life. Luke is my number one fan, and my biggest supporter as I write books filled with emotion, memorable characters, tough choices, and a whole lot of love. And our meet-cute? I turned it into a book, because every time someone asked how we met and I told them, they tearfully replied, “That sounds like a book.”

So, no, I didn’t get a fairy-tale. But what I got? It taught me far more than a fairy-tale ever could.

Jennifer Millikin is the author of seven novels, two of which have been awarded Reader’s Favorite Gold Stars. She lives in her home state of Arizona with her husband, two children, and playful Labrador Retriever. Grateful to be living her lifelong dream of writing, Jen juggles her made-up worlds with her real one of soccer practices and laundry. She’s passionate about creating multi-dimensional characters and stories that jump off the pages. Jen wrote her first book in the fifth grade, and it was titled A Gust of Wind and He Was Gone. She blames the dramatic title on her childhood soap opera habit. Find her here: https://www.jennifermillikinwrites.com/ 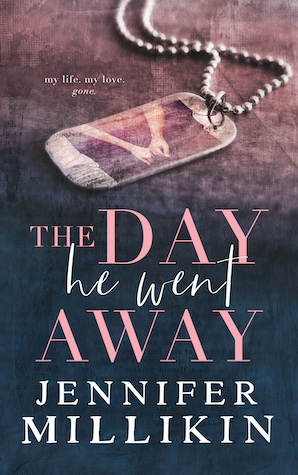 The Day he Went Away by Jennifer Millikin

Life was roses. I was happy. I had my dream job. I’d finally fallen in love with the man who’d been waiting for me since he was a boy. Soon his four years in the Army would be over, and we’d be together forever. My perfect life was squarely in my palm.

And then it was snatched from me.
The harshest, cruelest truth became my reality.
And I turned into a shell of my former self.

Then a stranger arrived, wearing Army fatigues and closely cropped dark hair.
Fulfilling a promise to his comrade-in-arms brought him to my front door.
And the focus of his promise, it turned out, was me.

His mission was simple:
Care for me.
Heal me.
Bring me back to life.

But what started out as an uncomplicated mission is quickly turning personal.

He came here to take care of me.
But neither of us expected how much he’d need me, too.
And we definitely didn’t expect these feelings.

My broken heart knows how wrong it is.
We’ll fight it, harder than we’ve ever fought anything.
I’m afraid to win, and I’m even more terrified to lose.

Of all his missions, I may be his most dangerous.