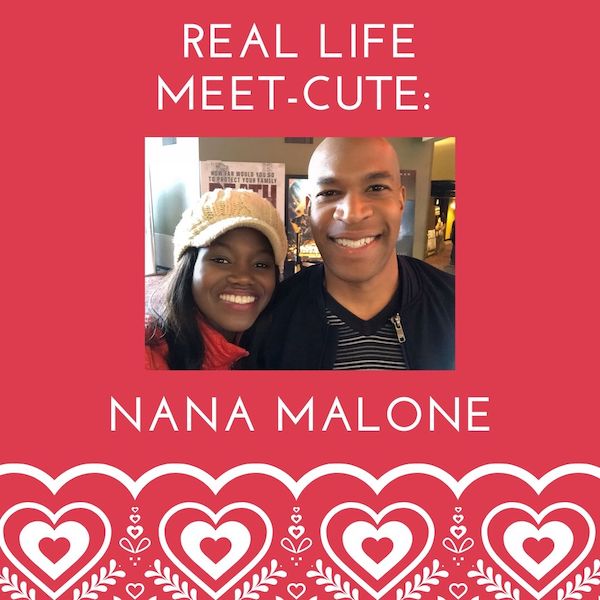 [Note from Frolic: We are so excited to welcome author Nana Malone to the site today. She’ll be telling us all about her real life meet-cute!]

I wish I could tell you, I met Erik under a starry night, with the scent of bougainvillea in the air, and the warmth of an August night kissing my skin with the picturesque view of the three rivers.

Although, if you count the little fluorescent stars plastered on the ceiling of Delta Upsilon Fraternity, then maybe it was a starry night.

It was the first day of freshman year. And I was young and bright eyed and ready for adventure. I marched off to my very first fraternity party with my roommate, Ellen who was just as bright eyed, and idiotic as I was.

But, not to worry, we were ultra nerds and vowed to be home by 1:00 AM. Because of course the next day we wanted to sign up for all our clubs and extracurriculars. But before that—party!

It was there in Delta Upsilon, with the beer soaked sticky floors that made that slurping sound every time you lifted a foot, that I met my future husband.

Before our fraternity adventures, the school gave us Freshers a helpful social lift, by doing something called Playfair. Basically, camp with trust falls and hundreds of freshmen running around our football fields playing all sorts of games. But little did I know that these games would give me an in that I needed with my future husband.

I met a young man called Jim. He had my same birthday. We became birthday buddies with our arms linked elbow to elbow careening along the football field.

Fast forward to later that night, there I was in Delta Upsilon, trying to dance with someone who couldn’t find the two or the four beat if you paid him. And he sort of staggered drunkenly as he placed his hand on my waist which kept sliding to my butt. And I would have to remove it. And then step away, as you do.

But there, coming down the stairs was a familiar face. Jim. I knew Jim. I would no longer have to dance with said drunken frat boy. And Jim oh so hopefully could find the two and the four.

But right behind Jim was someone super cute! I knew right away he couldn’t possibly go to Carnegie. We were known for our high concentration of unattractive nerds. There were hot actors too (Looking at you Joe Manganiello and Matt Bomer) but they kept the hotties far away from the rest of us.

So many nerds. Nerds to the left of me more nerds to the right there I was stuck in the middle again. In the glow of black light, his green eyes caught my attention. No way someone that hot went to Carnegie Mellon. He must be lost.

Alcohol was flowing, and the music was actually decent. Well done Delta Upsilon. So I was feeling bold. I walked up to this gorgeous guy, and started dancing with him.

(Ask him now and he’ll say I was very forward.) 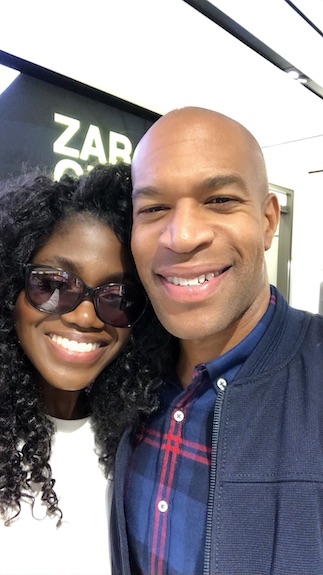 What I will tell you, is he was sadly very respectful with his hands. I write romance so I would have written this entirely differently. But, what happened that night, with beer staining my Steve Madden platforms, was I danced. And that was it. And then my roommate diligent that she was, tapped me on the shoulder at 12:55. “Come on Cinderella, time to go home.”

And then I waved goodbye to the hot man with the green eyes.

I had no name, I had no school. Who was that hot man? Ships passing in the night.

Fast forward several weeks later to yet another fraternity party.

I know what you’re thinking. That I spent my years at Carnegie Mellon partying it up with fraternity boys. I swear to God I studied.

So there I was in SAE fraternity. I know I know. Remind me to tell you the story about how once my sorority sisters and I painted their lions pink and put lipstick on them. It’s quite the story.

At any rate, once again there was dancing. But this time he came up to me. That’s right. I was dropping it like it was luke warm.

My friends, ever so helpful, all leaned in. “Hey, isn’t that the hot guy?”

My eyes scanned the crowd. And there he was. Hot guy from Delta Upsilon. “Yep, that’s him.

Then began the play it cool game. Where I pretended I didn’t see him. And then he pretended he didn’t see me seeing him. Finally he strolled over.

He was equal parts earnest and sweet. In his head he must have said “Hey, aren’t you that cute girl?” At least that’s what I tell myself.

And we danced again. This time when he had to leave there was a name exchange. And apparently I could no longer find the two and the four because I was so nervous. Hot man, had his hands on my hips. And they were traveling nowhere near my ass. The sheer disappointment was enough to kill me.

But then this time he got the Cinderella tap. But this time, this time, I had a name! Erik.

Erik, as it turned out, did not in fact go to the University of Pittsburgh. He went to Carnegie Mellon. I started seeing him all over campus. (Later he would tell me he managed to sort of figure out my schedule) Stalker much?

And every time I would catch his eye, we would give each other these kind of shy smiles. But neither one of us making a move. Of course I would find the shy guy.

My friends, ever so helpful, pulled out our freshman picture book. Oh yes, they tortured us with a book of photos from when we were in high school before we had changed our looks and become entirely new people. But lucky for me it had photos of every single freshman so you could find out their names.

So, as you do with your girlfriends, we did a little light stalking.

I had his name so I had something to go on. I also found out right away his mother didn’t like him very much. She’d sent the worst possible picture of him.

Terrible haircut, shiny forehead, goofy smile. She clearly didn’t want him getting laid at all.

There were some precollege programs at Carnegie Mellon for students to get to know each other and get to know campus before classes started so I asked a couple of people who’d gone if they knew him.

And as my luck would have it, one of the girls said yes.

And then this other girl. Across the aisle perked up. “Yeah, he’s my suite mate.”

And a plan was born. Some elaborate running into each other at a party of some sort because why keep things simple? The deets were he had no girlfriend so I was in like Flynn!

But the day of the big party intro, I got hit with the mother of all homework assignments. Some organic chemistry shenanigans meant to kill me.

One of the girls arranged a meeting with a chemistry tutor. Except when we got the tutor on the phone, she handed me the homework with notes on the bad assumptions we’d made and waved goodbye.  And then she left me to it. On the phone with a stranger. “Hello?”

His voice was low, extra deep. The kind of deep that college boys didn’t quite have yet. But I knew. In that moment I knew exactly who it was.”

It was fraternity boy, Eric. “Hi. Are you the chemistry tutor?”

He laughed. “Nope not a tutor. I think we’ve been set up.”

Oh that wily Angie. On our wedding day, I even thanked her in my speech. Because that afternoon I spent two hours on the phone with this boy I didn’t know. Who as it turned out did not have green eyes. But more of a whiskey brown. And the best smile you could ever imagine.

And, thankfully, he knows how to keep a beat on the twos and the fours. So many thanks to Delta Upsilon, and oddly, SAE. Because without them, I might not have met my husband. 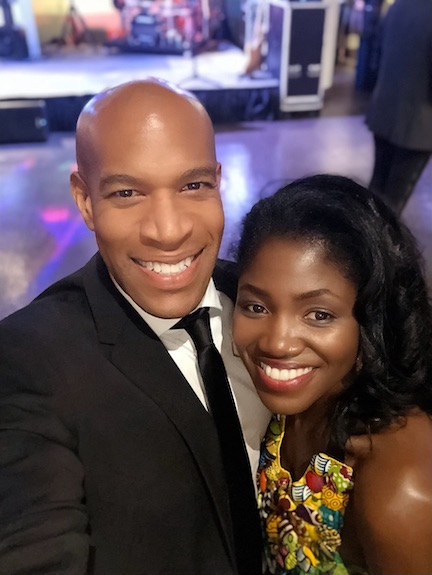 USA TODAY bestselling author Nana Malone’s love of all things romance and adventure started with a tattered romantic suspense she borrowed from her cousin on a sultry summer afternoon in Ghana at a precocious thirteen. She’s been in love with kick-butt heroines ever since. You’ll find Nana working hard on additional books for her series. And if she’s not working or hiding in the closet reading, she’s acting out scenes for her husband, daughter and puppy in sunny San Diego. Find her here: http://nanamaloneromance.net/

Where Romance and Pop Culture Live Happily Ever After.
All Posts
PrevPreviousJ. Kenner Writes…About Fleabag, the Fourth Wall, and Fandom
NextGalentine’s Tribute to Television Shows About Female Friendship by Alena DillonNext