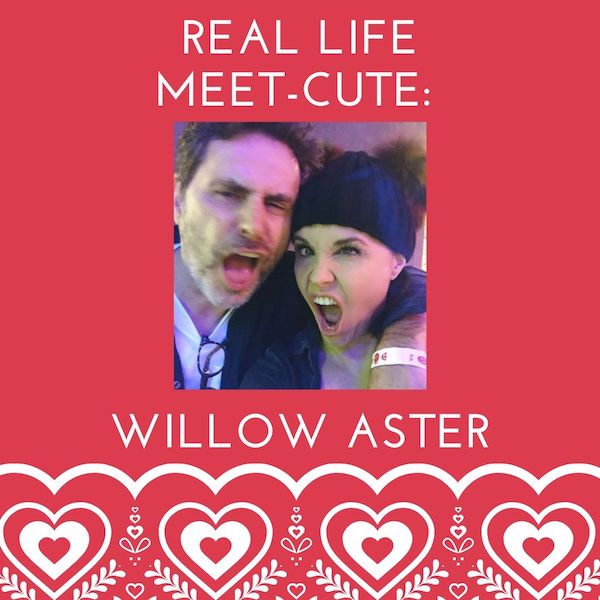 [Note from Frolic: We are so excited to welcome author Willow Aster to the site today. She’ll be telling us all about her real life meet-cute!]

If any of this sounds familiar, it’s because I tell the romanticized version of the way I met my  husband in True Love Story…want to hear how it really went down?

My parents and I were in Dallas to see my boyfriend. We lived in California and—let’s call him Mike—had visited for the summer and we’d had a car accident (because he was staring at me and ran into the car in front of us and my head met the windshield). But this story is not about Mike or the reason I’m so scattered!

Long story short, Mike’s car stayed in California to get worked on, and he took our car with him back to Dallas when he had to go back to school. (Telling this story reminds me again how nice my parents were!)

Two years before, I’d seen this guy (not my boyfriend) who played all these instruments—let’s call him Ian. In our church circles, he was a huge deal. I didn’t know that at the time, but once I stalked him the old-fashioned way—asking anyone who might know who that guy was and everyone went on and on about what an amazing musician he was—I was a little swoony whenever I thought of Ian.

So when I walked into the Chili’s in Irving, Texas, with my parents and boyfriend to meet lifelong friends for lunch … and saw Ian standing there, two years after I’d seen him for the first time, I freaked out. I told my mom that was IAN and she didn’t believe me. And when he shook my hand after we were introduced, I felt hot and cold and sweaty, just like our romance novels talk about. Mike sat on one side of me and Ian sat on the other, and while Mike got to know my family friends, Ian made sure he got to know me. I remember the way he propped his head on his elbow and turned to face me so he could stare better. My boyfriend was oblivious, and I was so entranced with Ian myself, I didn’t think it was odd that he was staring right back at me.

He left, and I told my boyfriend, “I’ve wanted to meet him for a long time.” And then, watching his profile as he walked past the window, I said, “He looks so sad.”

But first, I had to break up with my boyfriend, which I did.  🙂

That was the beginning of a long, drawn-out love story with many ups and downs, but we’ve been married twenty-five years, and I have never regretted saying yes.

Willow Aster is the author of USA Today bestseller, True Love Story, In the Fields, Maybe Maby, Fade to Red, Lilith (formerly known as Whore), 5,331 Miles, Miles Ahead, Downfall, Exposed, and co-author of The End of Men series with Tarryn Fisher. Willow loves nothing more than writing the day away—anywhere will do. Her husband and two children graciously put up with her endless daydreaming; otherwise, the writing would never get done. She’s also an avid reader, and has been known to walk, cook, and clean with her nose in a book. She’s lived in Texas, Tennessee, Indiana, and California, but Minnesota has captured her now and doesn’t seem to be letting go. Although shy, this lifelong writer and artist is convinced that the best part of this career for her is meeting and connecting with readers, authors, and all of those in this community of lovers of words. Find her here: http://www.willowaster.com/