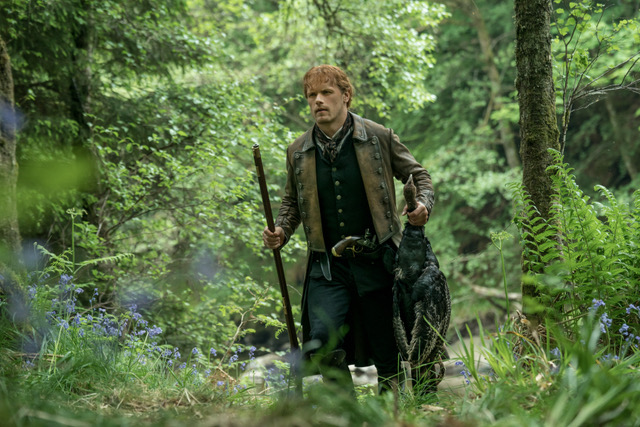 You know, I rarely scream at television monitors. I talk to characters on the screen and have been known to go OC on Twitter while watching an episode or two. I admit, I get involved in my shows in a very physical, passionate way. But a flat-out scream of shock, surprise, and heartbreak hadn’t happened since, well, honestly, season 1 of Outlander.

But this episode brought out the Kraken of screams.

Summary provided by Starz: Jamie, Claire and Young Ian embark on a long and uncertain journey to rescue Roger, while Brianna forges a friendship with one of Jamie’s old friends as she fends off Aunt Jocasta’s attempts to secure her a husband. Meanwhile, Murtagh enlists Fergus’s help with a dangerous task.

In the opening slate, the camera pans over a tabletop covered with charcoal drawings on paper. The scene shifts immediately to Brianna, sitting at a desk in Jocasta’s River Run estate. She is drawing the troubled faces of the slaves she’s seen working the land but also distorted images of the memories of her attack.

Enter our excitable Lizzie, who glances at the drawings, which to her overworked psyche reveals ominous, bewitched images.

Brianna sets her straight; she’s sad, not cursed or bewitched, and although she might end day forgive her father for mistakenly beating Roger, she won’t forgive Jamie for what he said. You’ll recall he accused her of lying about being raped to hide the fact that she willingly laid with Roger. Of course, he said this before finding out Stephen Bonnet attacked Brianna.

On the road, searching for Roger, Jamie, Claire, and Young Ian (and Rollo) are making headway in their search for Roger. However, the tension between Jamie and Claire escalates. They both kept secrets from each other, and Claire is struggling with conflicting loyalties — her daughter or her Jamie.

A subplot of this episode focuses on Fergus (it’s about time) and Marsali. Fergus feels that he is less than a man. Without a hand, he struggles to find work. He seems depressed and Marsali worries she may lose him.

Meanwhile, Murtagh is staying with Fergus and Marsali, and recruiting regulators. He is also seeking to fulfill a promise to Jamie – to find Bonnet.

At Jocasta’s home, she is planning a party. Brianna is the guest of honor and needs a new dress. Brianna is not interested, but Jocasta shares a story about Jamie’s mother and what she went through before she finally married the man she truly loved. She was also an artist like Brianna.

In Wilmington, Marsali awakens Murtagh in the middle of the night. Concerned about Fergus and his sense of self-worth, she solicits Murtagh’s help. She wants him to invite Fergus to join the regulators. Initially, Murtagh hesitates. If she wants to get rid of her husband, he’ll take him out back. But Marsali interrupts, and assures Murtagh if she wanted Fergus dead, she’d shoot him herself. What she wants is a whole man or none at all. (And she is speaking about his spirit.)

At River Run, Brianna makes an impressive entrance to the party in one of Jocasta’s resized gowns and sports a gift of earrings, also a gift from Jocasta.

Brianna’s suitors populate the room. Each man takes a turn attempting to wow her. Slowly, Brianna becomes as aware as the viewer that she is on display, with no options to refuse a marriage proposal.

Now, let me just say that when Lord John Grey enters a room, all candidates can kiss their chances of winning Brianna’s hand in marriage goodbye. The man does make an impressive entrance (and can I say, yum?).

In Wilmington, Marsali’s plan is in play. Murtagh invites Fergus to join the regulators. Marsali eavesdrops, as Fergus thanks Murtagh profusely for the offer. Then he refuses, adding that his place is with his wife and daughter. Marsali is thrilled with his response.

During dinner, Brianna entertains the dinner guests with a psychological game. She asks each of them to close their eyes and envision a walk in a forest with a companion and an animal. When she asks Lord John Grey who he saw, he says Jamie. Brianna wonders why and he explains, I am looking at his daughter.

When she stands to leave the dinner table, Brianna sways and faints. Escorted to her room, she and Lord John discuss her father briefly. He then learns she is pregnant. And then there’s our big mouth Lizzie. Sometimes I feel she is a plot device. Other times, I want to tape her mouth shut.

Later, Jocasta makes an impressive speech about the hardships Brianna and a bastard child will encounter. Bree, however, doesn’t want to give up on Roger — she hopes he’ll return, but she can’t count on that. Brianna also can’t take the risk that her child won’t be able to travel through the stones. That means Jocasta is correct — the child would be a bastard with no chance for a decent life in the 1700s.

At Wilmington, Murtagh is keeping his promise to Jamie and finds Stephen Bonnet and knocks him out cold.

At River Run, Brianna is tossing and turning in her bed. She rises, grabs a candle, and heads for the kitchen. On her way, she stumbles upon Lord John Grey and one of her suitors from dinner having sex. She doesn’t make her presence known and hurries away unseen.

The next day, she approaches Lord John and asks him to marry her. He refuses. But she threatens to expose him; consequences be damned — an excellent scene between Sophie Skelton and David Berry. Nuanced and heartbreaking, Lord John admits his love for Jamie, and she withdraws her threat. Brianna is nonetheless desperate. But Lord John senses there is something more than the missing Roger that worries her. She admits she was violated, and the baby may not be Roger’s.

Sad, but resigned, Brianna returns to the parlor, where Mr. Forbes is waiting to propose marriage. But enter Lord John. He asks if Brianna has shared the good news? They are to be wed.

On the trail searching for Roger, Jamie, Claire, and Young Ian discover a corpse. Young Ian recognizes (the clothing) as belonging to another prisoner he saw with the Mohawk when he sold Roger. A tragic end to the man, but the good news is Claire, Jamie and Young Ian are on the right path.

At River Run, Brianna and Lord Grey talk about Jamie, whom she still has not forgiven. She also has a letter from Jamie, Lord Grey hand delivered, but she hasn’t opened it yet. At the end of the scene, as the camera pans away for a long shot, Brianna begins the letter.

Meanwhile, on the road, Claire apologizes to Jamie, but she also confesses she may have to keep secrets from him again when it comes to her daughter. Jamie understands but worries Claire feels the same way about him as Bree — that he is a savage.

But eventually, all is good. Jamie and Claire, Claire and Jamie — they have the best makeup scenes!

Next, we are with Roger as he arrives in the Mohawk village. Good news bad news situation — he didn’t go through the stones! Hooray! But as he walks into the encampment, there is a commotion. The Mohawk men are running, grabbing weapons, sticks, tools, and they are lining up in rows, with a path open between the rows. They are also cheering.

Confused and concerned, Roger asks his Mohawk handler two questions: What is this? What’s going on?

Then Roger is shoved forward. On either side is a line of Mohawk men and they beat him where he stands. He stumbles ahead and hunches forward, trying to protect himself from the blows. The beating drives him to his knees. He falls on his face, and the Mohawk men suddenly stop.

Roger raises his head and sees the end of the line. He realizes this is a test. Determination takes hold, and he pushes himself to his feet, takes a deep breath, and prepares to reach the end of the line no matter the pain or the consequence.

But then, a punch lands firmly and fiercely on his jaw and — end scene, end episode — and yes, this is when I screamed!

Two episodes in a row and we end with Roger (and I love it)!

Also, two episodes left to season four. Next week, join me for my recap of Providence, episode 412!

Denny S. Bryce is an award-winning author and three-time RWA Golden Heart® finalist, including twice for WILD WOMEN AND THE BLUES, her debut historical fiction novel coming on March 30, 2021. @dennysbryce
All Posts
PrevPreviousSam Heughan is Using Instagram Story And It’s Everything To Us
NextFive Reasons to Stop What You’re Doing and Watch Deadly ClassNext