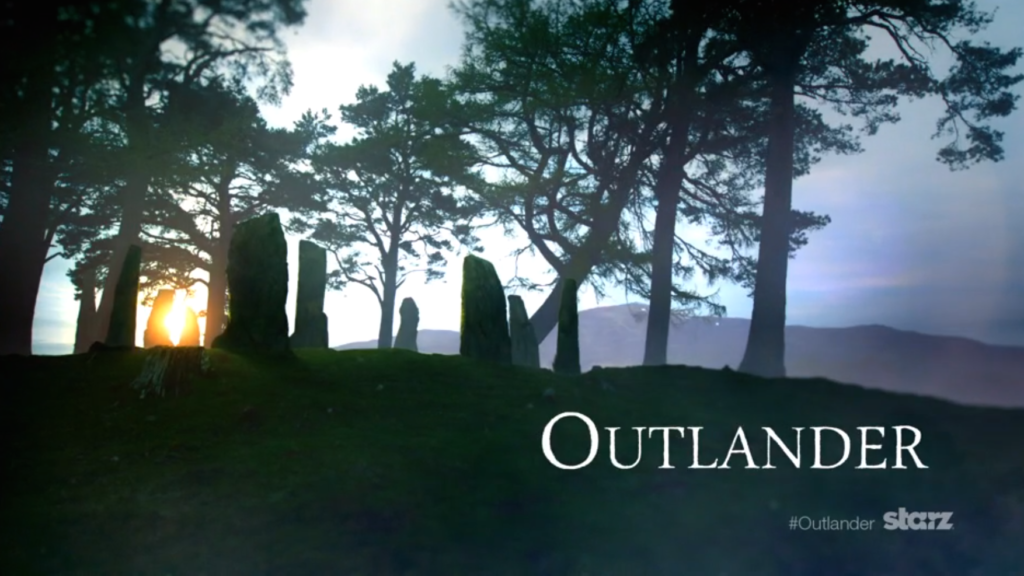 This episode was high drama. Huge stakes. Sacrifice. Honor. Conviction. Love. Denial of self. Acceptance of self. You name it, the big issues were smeared across the screen for our consumption from top to bottom.

In other words, another exciting episode of Outlander – and the last five minutes shattered the heart strings.

Summary provided by Starz: Brianna confronts a violent figure from her past in an attempt to cope with her trauma. Roger befriends a fellow captive and endeavors to escape the Mohawk Village, while Fergus and Marsali plan a dangerous mission to save an old friend from the noose.

At the Mohawk village, the first slate shows a man taking a sip from a small jug that he passes to another man to refill. For the theme, I suspect this snippet is meant to convey the importance of sharing and community. Let’s see if I’m right:)…

The episode begins in the Mohawk village where Roger MacKenzie (also known as the historian Roger Wakefield) is getting his butt kicked (again – smh) as he attempts to reach the end of the gauntlet. After this latest Roger beat down, we learn that if he makes it through the gauntlet, he will improve his status from captive to something else (not clear what). Sadly, Roger fails.

In Wilmington, Fergus is planning to free Murtagh, who you recall was captured in the last episode along with Stephen Bonnet. Now, both men are scheduled to hang.

At River Run, Lord John tells Brianna that Stephen Bonnet is in jail in Wilmington. Brianna wants to see him. Lord John refuses to allow it. In her condition, the trip would be difficult, plus she shouldn’t watch a hanging. Brianna doesn’t want to watch him hang. She wants closure. She shows Lord John the letter Jamie sent her, which talks about forgiveness and the importance of not seeking revenge. Lord John agrees to take her to Wilmington.

We then return to the Mohawk Village, and I must call a time-out on my recap to talk about the beauty of the set design. The detail in each shot is inspired. Congratulations set designers, costume designers, everyone involved in creating such a gorgeous set.

Now, let’s talk about Roger. In the village, he is a water bearer with an injured arm. Seeing his pain, a young woman, holding an infant, approaches him. She passes him some green herbs and in French explains they will ease his pain.

Roger has made a friend! But his captor, the young Mohawk who has kept Roger hog-tied throughout the journey (his name is Katheroton) interrupts and shoves Roger away.

Brianna and Lord John arrive in Wilmington. With the prospect of seeing Bonnet in the flesh for the first time since he attacked her, Brianna’s determination crumbles. Her plan to face Bonnet is more difficult than she imagined. She pauses to gather her wits.

At the Mohawk village, Roger is delivering wood. At one point, he pauses to smile at the young woman who gave him the herbs. Katheroton strikes Roger in his injured shoulder (harder than the last time). He cries out and falls to the ground, but the chief intercedes. He orders Roger taken to a hut.

There, Roger meets another prisoner, a minister who has “sinned” with one of the Mohawk women (the woman with the baby who gave Roger the herb). The Mohawk want the minister to baptize the child. However, the minister believes his sin has made him unworthy to baptize an innocent. If he did so, he would condemn the child to a life as a man no better than him.

In Wilmington, Fergus is concerned about his plan to free Murtagh. Talking to Marsali, he wonders aloud what Jamie and Clare would do. Marsali has an idea, a new plan that includes her. It is still dangerous and means they’d have to leave Wilmington and move to Fraser’s Ridge immediately. But they have no choice but to free Murtagh.

Roger is listening to the minister explain why he cannot baptize his child. He understands the consequences and that he will die a horrible death – but he just can’t perform the baptism. And Roger can’t understand why not.

After the minister is free, he could arrange for another man of God to baptize the child. (I am of the same mind as Roger, here).  But the minister is a man of principle and unwavering conviction. When the Mohawk come for him, he leaves Roger alone searching for a way to escape.  Roger finds a soft spot in the dirt, grabs some broken rocks and starts digging.

That night, Roger can hear the minister’s screams. Roger digs faster. When the minister returns, naked and severely beaten, Roger tries to console him; he even recites a prayer.

After a while, the two men talk of sacrifice, love, and honor, but Roger explains that he is a changed man. Love has only given him pain. He has a new motto — look out for number one. As he makes these strong statements, Roger’s eyes fill with tears — we know he is still conflicted, but he can’t take the pain anymore.

Roger returns to digging, but now the minister joins him (sharing the jug as in the opening, maybe?). Time passes, and Roger threatens to give up — the hole will never be large enough.

The Mohawk return (again) and ask the minister if he’s made a decision. His mind is unchanged. He cannot baptize the child. The Mohawk take him away, and Roger is left alone to finish digging the hole.

At the jail in Wilmington, someone is pouring gunpowder around the perimeter. Brianna and Lord John approach. Brianna asks Lord John to wait. She wants to talk to Bonnet alone.

Brianna shows Bonnet she is pregnant. He doesn’t remember her at first. Once he does, he ends of giving her a gemstone (pulled from a hiding place in his tooth). She takes it. And we see a brief moment of something other than the devil in Bonnet. He wants to provide a gift for his child.

As Brianna and Lord John prepare to leave the jail, here comes Fergus and his crew to break Murtagh out of prison.

I do enjoy when all the supporting cast (one of the best in TV Land) are in the same scene. We have Murtagh, Lord John, Fergus, and Brianna. The only one missing from the Wilmington bunch is Marsali.

(Oh, and that last shot of Bonnet before the big explosion, shows him reaching for a set of keys, conveniently left on the ground near his cell – ugh, he lives! I just know it!).

Outside, Marsali has the wagon waiting. Fergus and Murtagh slip beneath the canvas, and she rides off — presumably heading for Fraser’s Ridge.

At the Mohawk village, Roger escapes! He’s free, and he’s running. But he hears screams again. He knows what is happening to the minister. He debates with himself; his favorite retort is calling himself an idiot. But then in the next shot, he is running back into the village toward the man burning in the flames. As he runs, he grabs a barrel and tosses it at the fire, which seems to explode and engulf the minister in flames (a much quicker death).

Roger watches. The Mohawk village watches. The girl who bore the minister’s child watches and seems to mutter a prayer.

The camera pans the faces of the Mohawk village, and no one is enjoying this man’s suffering.

Then there’s a close up of the young mother, the woman who gave Roger the herbs. She places her child on the ground, and then she walks toward the flames. Stepping into the fire, she wraps her arms around the man she loves, and they burn together.

The young Mohawk’s eyes burn with tears along with Roger’s as they witness the unimaginable.

Then the young Mohawk picks up the child. Holding the infant in his arms, he drops to his knees in front of the lovers in the flames and weeps.

And there you have it — Roger sacrifices his escape to help a man who still believes in love.

And we know, as the Mohawk lead Roger back to his hut, he will never stop loving Brianna.

There weeks in a row, the last image at the end of Outlander is Roger. It’s fitting. His character arch has been the heart of the latter half of this season, and it’s been a beautiful thing to watch.

Now, there is only one episode left.

How will this season end?  Likely with a scene that will have me screaming:). My neighbors have heard enough of that kind of noise.

So, join me next week for the last episode of this season, 413, Man of Worth.

Denny S. Bryce is an award-winning author and three-time RWA Golden Heart® finalist, including twice for WILD WOMEN AND THE BLUES, her debut historical fiction novel coming on March 30, 2021. @dennysbryce
All Posts
PrevPreviousWe’re Obsessed With ‘How to Train Your Dragon’ And Make Zero Apologies
NextFictional Boyfriends That Are Too Good To Be TrueNext