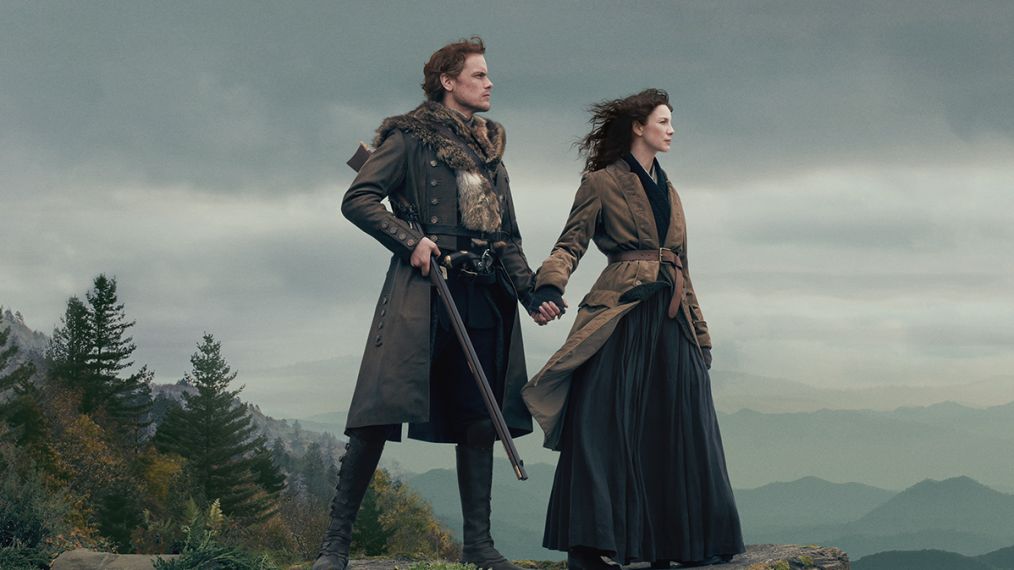 This season finale of Outlander hit all the right chords. I enjoyed it tremendously. And to the writers, producers, actors, camera crew, costume designers and makeup artists — bravo on one of my favorite seasons of this fantastic series. Now, let’s get into this recap!

Summary provided by Starz: Jamie, Claire and Young Ian’s attempt to rescue Roger from his Mohawk captors goes awry when a ghost from Claire’s past lays waste to their plan. Meanwhile, Brianna worries Claire, Jamie and Roger might not return and contemplates life as a single parent without them.

The first scene shows two young children playing “cowboys and Indians” in a park in the 1970s. A man on a bench is reading a newspaper, his face obscured. When he lowers the paper, we see the man’s face. He is Native American with long dark hair, wearing a large gemstone around his neck. We can tell he is not pleased with the children and the “game” they are playing.

We then cut to the forest of New York in 1770. Roger is in his hut, apparently trying to sleep while sitting upright.

The camera pans outside the hut into the woods a bit of a distance away. We first see a familiar coat sleeve and a man’s arm (Jamie) touching a tree trunk. Soon, we see Jamie’s face, and he is peering down at the village, searching for Roger.

Jamie, Claire, and Young Ian have found Roger! But can they bargain the trinkets they’ve brought and make a trade that will be acceptable to the Mohawk? It seems there is a chance. Well, until the pendant Claire wears around her neck stops any possibility of a swap. Suddenly, our gang is asked to leave. Roger (aka Dogface) will not be released no matter what.

At River Run, Murtagh shows up, and Jocasta feeds him a lavish meal before giving him the news of Brianna’s pending wedding to Lord John Grey. Of course, Murtagh is appalled. She can’t marry a redcoat.

The scene cuts to Brianna in bed with Phaedre checking on the baby still in her stomach (Phaedre is a midwife). It seems Bree is holding up best she can. Worried about Claire, Roger, and Jamie, she is growing despondent, fearing none of them will return to her.

In the woods, Jamie warns Claire and Young Ian to be still. He hears approaching footsteps.

A woman from the Mohawk village steps out of the forest along with a handful of warriors. They want the gemstone Claire wears around her neck. Claire wants to make a deal — the pendant for their help in freeing Roger.

The Mohawk woman initially refuses, then Claire convinces her to tell her why the gemstone is so important. This is when we learn about Otter Tooth (the same man reading the newspaper in a park in the 1970s). He traveled back in time to warn the Mohawk about their future and how they should “kill all the white men” because if they don’t their stories will be lost forever.

Claire recants the story of her meeting with the ghost of Otter Tooth and how she found his skull and the pendant.

Back at River Run, Murtagh is chatting with Bree about Lord John Grey (will she or won’t she marry him — she won’t), why she needed to visit Stephen Bonnet (closure), and if she will forgive Jamie (she already has).

In New York, the newly assembled team of rescuers slips into the Mohawk village to save Roger. Things start great. They find Roger and sneak him out of the hut. Hope is high that an escape is imminent. That is until our gang is discovered, and the entire village descends upon them. Young Ian fights. Claire fights. Roger is too weak to do any damage, and Jamie fights bravely but is outnumbered.

One of the Mohawk has Jamie on his knees; a pistol pointed at his head.

The chief of the village expels the Mohawk troublemakers from the village (never to be allowed to return) but will release Jamie, Claire, and Young Ian. However, Roger must stay. This is when Jamie, thinking of his daughter’s happiness, proposes a trade – he will remain in Roger’s place. When Young Ian goes to make a deal with the Mohawk (remember he speaks the language), he derails Jamie’s sacrifice by taking Jamie’s place in exchange for Roger.

Sadness ensues. It is a tearful, heartbreaking scene between Jamie and Young Ian. His nephew, who idolizes him, who Jamie traveled across an ocean to find and return to his mother, his sister, Jenny, is saying goodbye.

Notice that while all of this is going on, Roger is not complaining or offering to stay — and I don’t blame him. He needs a break, people.

We return to River Run to a showdown between Murtagh and Jocasta. They appear to be on different pages about regulators and Brianna’s future. This conflict lasts up until the next scene where we find Murtagh lounging on top of the sheets, inviting Jocasta to return to bed. (Another couple I am rooting for – and hope to see more of next season). Bravo Outlander!

Now we get to the Men of Worth, the title of the episode (Young Ian showed his metal in the scene above by taking Jamie’s place).

Next, it is Jamie and Roger who are facing off.

I re-watched this sequence a DOZEN times. When the acting is this inspired, you’ve got to watch it over and over until it’s burned into your psyche. Richard Rankin is SOOOOOOO good! Sam Heughan is SOOOOOOO good.

Every blow Roger threw I was like hit him again. Get it all out. And if you do rewatch this reverse beatdown — look at Roger’s face. His anger, his pain, the tears flying as he delivers punch after punch, let me say I was there for this. (Although, it’s clear he’s not hurting Jamie that much).

And what heightens the impact of these scenes are the cutaways to Young Ian, who of course is tossed into the gauntlet. Except he fairs far better than the injured Roger did.

Before we know it, Young Ian makes his way through the gauntlet and is accepted into the Mohawk tribe. Way to go Young Ian!

Back in the woods, Roger is tired of punching Jamie and collapses to the ground, sitting on his rump, exhausted. But quickly, he asks about Brianna.

This takes us to my second favorite line of the episode. After Roger asks why Jamie beat him and learns it was mistaken identity, he is relieved. He’d thought Brianna had said bad things about him and turned them against Roger.  Now, he knows Bree asked Claire and Jamie to find him. And here comes the killer line:

“Oh, thank God. Having me beaten nearly to death and sold into slavery seemed a trifle extreme even for a woman with her temper.”

Throughout this sequence, Roger’s delivery of the name Bonnet is also inspired. When he learns it was Bonnet who attacked Brianna his shock turns into mild hysteria as he keeps repeating the name and telling Jamie and Claire about the ship’s captain, the madman (Bonnet).

Full disclosure I am an absolute fan of Richard Rankin (Roger), but the performances of all three actors elevated this sequence. Also, the choices made by the director were spot on, too. He showed the actors’ reaction shots to what they were hearing, and it worked nicely.

Oh, but again, Roger’s reaction when he learns that the baby may not be his – OMG! When he whispers Bonnet’s name through clenched teeth (yes, a cliché in the writing of words, but on the face of an actor who is nailing his lines – heavenly).

Now, near the end of the scene, Roger knows all, and Jamie asks him — can he return to Brianna and love her, knowing that she may be carrying another man’s child?

Also, the stare down between the two men is glorious. (Yes, I said it above – I loved this sequence).

Roger explains, “I need time.” (Oh, my goodness! What does this mean? Denny glances at the clock — again!)

We cut to Brianna (Sophie Skelton) giving birth to her child, and with the crescendo of the music silencing her screams, we see another actor fully committed to doing her best work.

But we aren’t done yet.  And yes, I admit I was still watching the clock. You see, if the show ended any time before it did, I was going to—let’s say, I acted very poorly–and may have used some profanity).

Two months later at River Run, Murtagh is still hanging out. He is in a parlor with Brianna and the baby, chatting. Phaedre rushes in to give Bree the news that riders approach and one is her mother. Bree rushes to the porch with the baby in her arms. Is Roger with them?

What? No, Roger? Are you kidding me? (Profanity ensues).

The tears flow because she can see that Roger is not with her parents. Jamie lets her know he’s alive, and Claire tells her that they told him everything. She has no choice but to conclude that Roger decided he couldn’t handle it. (Denny screams while glaring at the clock. They’d better fix this madness!)

A few weeks pass, and Brianna, Jamie, and Claire are heading back to Fraser’s Ridge. Brianna is packing and glances out the window.

She sees a rider in the distance (Thank God!). And she rushes down the staircase, outside, racing down the steps of the front porch, she then takes off. I mean arms are pumping, she is tearing across the lawn toward Roger. (Gah! I love a love story).

After some satisfying kissing between the lovers and a few, I love you, too. Roger delivers my FAVORITE line of the episode—looking deeply into Brianna’s eyes, he says: “Take me to see my son.”

But then because it’s the season finale – we can’t end there.

A regimen of Redcoats approach River Run. They ride by Brianna and Roger. Brianna whispers — “Murtagh.”

Remember, he is a regulator and a wanted criminal.  But when the redcoats enter the house, they ask for Jamie. They have a letter for him from Governor Tryon — form a militia and hunt down the fugitive Murtagh Fitzgibbons.

Okay, gang. That’s it. Season 4 of Outlander is a wrap! But the show is renewed for seasons 5 and 6. So, we’ve got plenty of Outlander to come.

If I don’t see you at an upcoming Outlander fan convention or two, hope to see you here again next year!

Until then — Roger and Bree forever!

Denny S. Bryce is an award-winning author and three-time RWA Golden Heart® finalist, including twice for WILD WOMEN AND THE BLUES, her debut historical fiction novel coming on March 30, 2021. @dennysbryce
All Posts
PrevPreviousLove YA: Fantasy, Love and a Beauty and the Beast Retelling!
NextDaily Frolic: Bookish Phone Case by Chick Lit Designs!Next