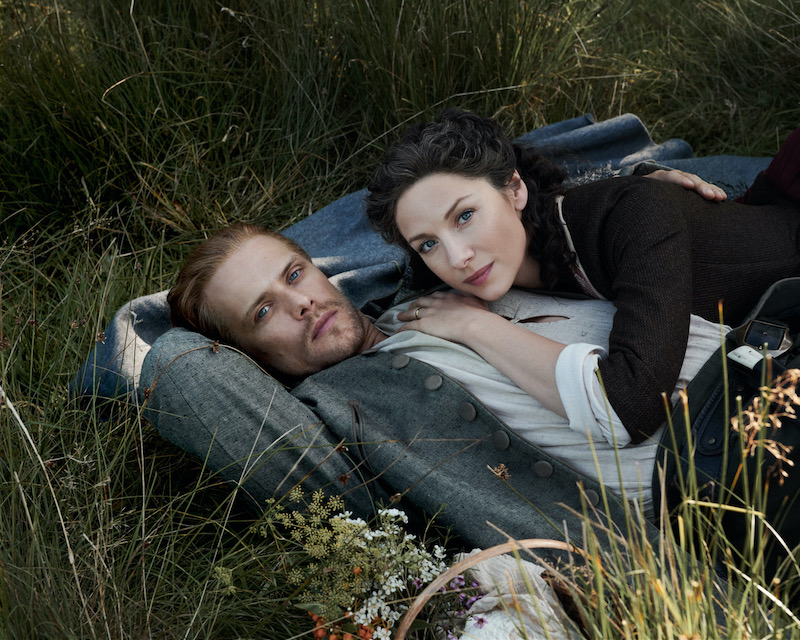 Twists and turns and flying insects, this week’s episode of Outlander is full of romance, intrigue, and a furious Jamie and a competent Roger—but at the heart of each episode is Claire—when will she stop pushing her agenda? Well, never because that’s the way we like her.

Summary provided by Starz: At Jocasta’s wedding, Jamie learns Tryon’s true motivation for ending the Regulator threat. Claire discovers a lead on the whereabouts of a former enemy from an unexpected source, but the price for the information is far higher than she anticipates. In Jamie and Claire’s absence, Roger and Brianna must save the Ridge from an imminent threat.

A flashback to another past begins the episode. British soldiers stop a horse-drawn carriage. Mr. Cameron and his wife (Jocasta) and daughter emerge. The soldiers discover a small trunk of gold and sight them as Jacobite traitors. A gunfight ensues, and Jocasta’s daughter is shot accidentally by Mr. Cameron when she steps in between the British soldier’s gun blast and that of Mr. Torrington. A distraught Jocasta returns to the carriage, and they depart.

A fast-forward to Jocasta at River Run preparing for her marriage to Mr. Innes (her fourth husband). Clearly, Jocasta doesn’t give a flying—well, you know—for Innes and luckily Ulysses interrupts their exchange. Jamie and Claire have arrived, and Jamie has some business to conduct. Guess what? Jeremiah MacKenzie (Brianna’s son) is the heir to River Run (and Jocasta’s fortune). Papers are signed, and the deal is done.

Cutaway to Roger at Fraser’s Ridge with a sniffling baby Jemmy, wishing he had a box of baby tissues while Brianna chimes in with a longing for children’s aspirin. Next, the gray kitty brings a gift – a locust. And then Roger notices there are quite a few locusts gathering, and he hopes they aren’t a “gift from the gods.”

The wedding festivities have begun at River Run. Crowds have gathered, and Claire and Jamie are lamenting – well, at least Jamie is, about how he wishes Jocasta was marrying Murtagh, not this Innes chap. Our beloved twosome then decide to put aside their concerns about the many things they should be concerned about and enjoy the festivities. But guess who’s at the party – Lord John Grey – so, freaking handsome (thank you, David Berry!). But Governor Tyron is also in attendance.

Tyron announces that the law has changed, and now a gathering of more than ten men is illegal. The rationale is that this will discourage men from plotting insurrection.

The locust swarm is coming to Fraser’s Ridge. The residents are in an uproar and looking for leadership from Captain Roger MacKenzie, but he has no idea how to save the crops from a swarm–not yet.

At the wedding, Philip Wylie (Chris Donald) arrives and OMG, he is a powdered dandy and a rake since his return from Paris. Claire has met him before and finds him annoying, but he is completely enamored with her.

Let me add that the actor portraying this character is fabulous. I was totally creeped out by his first kiss (or molestation) of Claire’s hand until his final moments. Ick. Ick. Ick (but well played).

At Fraser’s Ridge, Roger needs his confidence bolstered. Brianna provides the push that prompts him to figure out how to tackle the locust swarm. He recalls a poem from his youth and Eureka! He has a plan! Smoke them out!

At River Run, Wylie is accosting Claire. In so doing, he mentions an Irish smuggler he deals with who can help him provide her with the exquisite things she deserves. She instantly thinks of Bonnet (the only Irishman in the Carolinas – I mean, that’s what we’re led to believe). Claire serves Wylie some whiskey, and the two discuss her two wedding bands. Claire explains why they are important to her but then gets quickly to her purpose. Find out the Irishman’s identity. She uses her wiles to get Wylie to confirm her suspicions – the Irishman is indeed Bonnet.

An aside, each time Wylie opens his mouth, I get a super ‘ick’ factor shiver. Seriously, the actor’s portrayal may be slightly over-the-top, but it’s also spot-on Creepsvile.

Wylie escorts Claire to the stables to introduce her to his pride and joy—a racehorse. As Claire admires the animal, Wylie puts on the moves—a lecherous kiss on the neck and Claire quickly pushes him off with so much force he lands on his bottom in a pile of manure. (Yes, laughing out loud here is A-okay!). Wylie rises from the pile and calls Claire a ‘bitch’ just in time for Jamie to storm in with knife drawn, ready to slice and dice Wylie every which way. Claire clams Jamie, pointing out it would be in poor taste to kill a man during his aunt’s wedding feast. Jamie relents. Then Claire goes on to explain why she’d come to the stable with Wylie in the first place – yes, it’s all about Bonnet. With this news, it’s Jamie’s turn to come up with a plan to end Stephen Bonnet.

Smoke is everywhere and might work to save the crops at Fraser’s Ridge. Can it be true? Has Roger come up with a plan that works? Will Jamie respect him after this? Well, first, the smoke has to stop a cloud of locust descending upon Fraser’s Ridge—which begs the question, is there enough smoke in all of the Carolinas?

Jamie launches his plan to get back into Wylie’s graces, but it doesn’t work. So, he ups the ante. Wylie wants to gamble, but not for his reputation, but Claire’s wedding band—Frank’s ring. Claire doesn’t like Jamie’s idea and gives him both her rings – Jamie’s too. If he’s going to risk something, let him risk it all.

At River Run, Ulysses knocks on Jocasta’s door with a surprise visitor. And you guessed it—Murtagh! He has slipped into the house to give Jocasta a wedding gift. But Murtagh’s real reason for showing up is to ask for Jocasta’s hand in marriage, but she’s not ready to wait for a fugitive. An emotional scene that connects the opening tragedy to Jocasta’s reason for needing peace of mind in her next marriage. Loss is something she’s experienced enough of. She isn’t willing to take the risk of losing another person she loves by marrying Murtagh. Murtagh tells her he loves her and wishes he was brave enough to have told her so sooner. He leaves, and Jocasta breaks down. End scene (wow!).

A mildly intoxicated Jamie finds Claire in the stables. He won the game with Wylie and has both rings, but Claire is still pissed. They argue, but down deep, Claire isn’t that angry — although she gives him a good slap when he says something about her being only a woman. From there, the physicality between them changes from heated anger to just plain heat. In a gripping romantic encounter, our favorite couple work through their issues the best way they know.

After, the post-coital conversation is about making sure Stephen Bonnet never takes something from them ever again. Then Jamie slips the rings back on Claire’s fingers, promising they will never leave her hands again.

And of course, the next to the last scene had me screaming! We are in town at a coffee shop with Gerald Forbes (Billy Boyd) when Bonnet (Ed Speleers) joins him. Forbes tells Bonnet that his son (Jemmy) is the proud heir of River Run.

The final scene sets up trouble for the Regulators when Tyron instructs Jamie to reassemble his militia. They are going into battle alongside the Crown/British soldiers to smash the Regulator threat.

Stay tuned for next week’s The Ballad of Roger Mac…episode 506. And yes, the title alone tells me to be afraid! Something bad is coming!