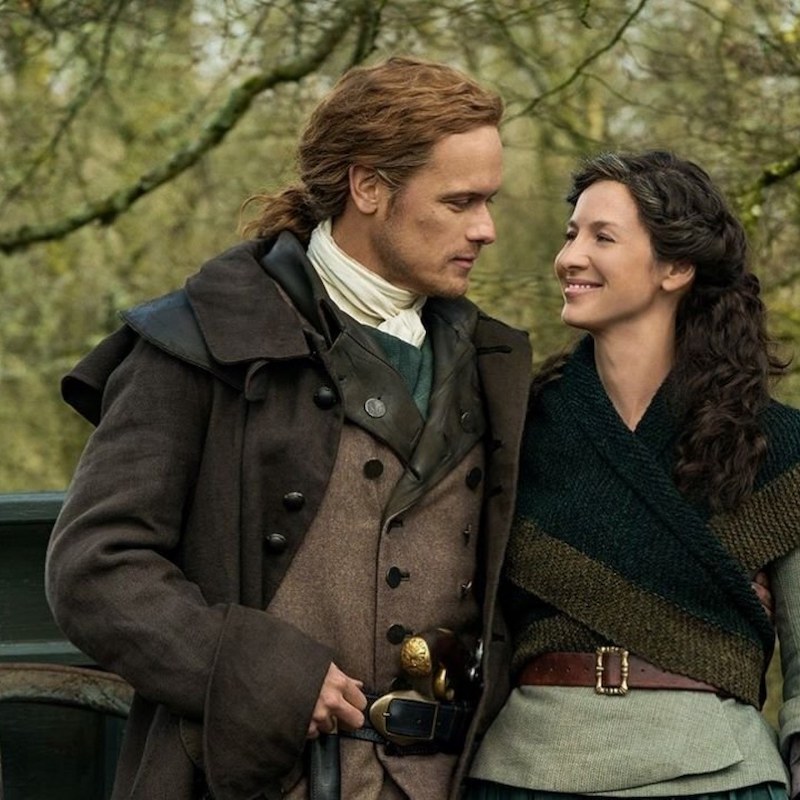 Oh, my! Oh, my! Oh, my! The Ballad of Roger Mac is that kind of episode. A recapping pro like me is not easily traumatized by events in an episode of Outlander. But this one grabbed me by the emotional throat. It was an assault of heart-palpitating moments that were just CRAZY! Even the cliff-hanger is on the last edge of reason – but DAMN (yes, I had to curse), this was the episode of the season–so far.

And I loved every moment, of course. So, without delay, here goes—this week’s recap (be prepared)!

Summary provided by Starz: The Regulator Rebellion reaches a boiling point, forcing Jamie to face his fear and confront the consequence of his divided loyalties. Brianna remembers some critical details pertaining to the Battle, forcing Roger to cross behind enemy lines where he finds himself in grave danger. Claire’s attempts to treat the wounded are threatened by the volatile Brown brothers.

The opening flashback to prior episodes gives significant clues as to what this episode will cover. It may seem that the title is a bit (not by much) deceptive. This is not an hour of programming all about Roger (although, I wouldn’t mind that episode one dang bit). But his adventures do add to the ups and downs. And let me guarantee, he does end up being a vital part of the joy, pain, and suffering The Ballad of Roger Mac delivers.

We begin in Hillsborough in 1771, and Claire’s voice over.

Then we are in a grand parlor in a home in Hillsborough. Roger and Brianna are saying their farewells before he goes off to battle. Let’s just say Roger isn’t exactly feeling his oats—he’s pretty sure that whatever lies ahead will include his demise.

We cut away to Jamie and Claire–celebrating in bed, Jamie’s birthday! (Happy Birthday, James Alexander Malcolm MacKenzie Fraser). I am thrilled for the opportunity to admire Jamie’s (OK, Sam Heughan’s physique), as Claire chatters about his ‘workings’ (a peek beneath the sheets, and they both agree, he’s in fine working order). But the core of the scene is about Jamie realizing he’s outlived his father, who passed at 49, and this is Jamie’s big 50! They both agree he looks good for his age. He has all his teeth, and his “cock” still stands up in the morning. Then Claire begins her imitation of what I’d call the Marilyn Monroe Happy Birthday song sung to President John F. Kennedy. The scene closes appropriately with Claire and Jamie making love.

Next, the militia is prepping for war. Tryon once again shows himself as a war-mongering, clueless, arrogant fool. (I don’t like him:).

Jamie distributes badges to help distinguish his militia from those of Murtagh’s during the Battle. The yellow flowery thing Jamie chooses to wear on his three-cornered hat. As he hands out the flowers, Isaiah Morton (lover of Alicia Brown) shows up, and the Brown brothers aren’t happy to see him.

Now, keep in mind, the militia is preparing to fight Murtagh and his Regulators. Murtagh sends a minister to the camp with a message of the Regulator’s grievances, but Tyron isn’t impressed. He calls the Regulator petition of peace nothing but a list of demands.

In Hillsborough, Brianna recalls something from her history class about the impending battle. She must share this information with her father and Roger.

Standing in a river, Jamie is saying a prayer in Gaelic.

(Side note: Jamie without his shirt twice in the same episode? Let me just say, thank you:).

A battle is coming, and he’s preparing his mind, body, and soul. Claire approaches, and they chat about war and survival. Meanwhile, Brianna is riding hard. Clearly, she’s remembered what it was about the battle she forgot. When she arrives at the militia camp, she immediately is met by her parents. She lets them know that Tyron’s army will win (a massacre, frankly). Jamie wants to warn Murtagh. Roger (why Roger, why?) offers to deliver the message to Murtagh.

He slips away from the militia camp during the night, heading for the Regulators. Meanwhile, Claire and Brianna prepare their supplies to treat the wounded. They are putting much hope in Roger being able to convince Murtagh not to fight.

Roger arrives at the Regulator camp as Murtagh delivers a fiery speech. His Regulators are ready to wage war. When he finishes, he sees Roger, who tells him he’s going to lose. Roger pleads with Murtagh, explaining that although the Regulators have twice the number of men as Tyron—they aren’t trained, have no weapons, no canon—in other words, they will be slaughtered. Murtagh is stubborn—plus, then he receives Tyron’s response to his plea for peace—and it’s more bad news.

Roger’s efforts to dissuade Murtagh are in vain. The men won’t leave. Murtagh tells Roger to return to his camp. On his way, Roger runs into the woman from last season, the MacKenzie woman with the baby that he saved on Bonnet’s ship. For some reason, Roger forgets he isn’t in modern times. He warns her to leave and tells her that he’s with the militia, and after warning her, he hugs her (ROGER—YOU DON’T HUG WOMEN WHO AREN’T YOUR WIFE IN 1771!).

We return to the militia camp where Tyron is insisting that Jamie wear a redcoat uniform. This is so wrong; it turns the stomach. But Jamie (in for a penny in for a pound) has no choice and puts it on. The expression on his face is rage, shame, and more rage.

Roger. Roger. Roger. The MacKenzie woman’s husband shows up, and he’s not having any of this stranger hugging on his wife, explanation or not.

But there’s a huge surprise in this scene in addition to the danger Roger finds himself. Graham McTavish plays her husband, Bud MacKenzie, who is a large striking man with a mane of dark hair and a brash temper (And I didn’t realize it was Graham until the credits!). The scene ends with Roger getting a savage rifle butt to the jaw.

Claire delivers her signature line – Jesus H. Roosevelt Christ – upon seeing Jamie in the redcoat uniform. They say their good-byes, and Jamie is off to battle.

The next scenes are historically accurate, I would think, in terms of how British soldiers in the 1700s fought. The Regulators don’t have the weapons or the training, so the Battle quickly turns into guerilla warfare, hand-to-hand combat. Still, the militia has the advantage of canons and weaponry.

Isaiah Morton is shot in the back. Claire treats him in her makeshift medical tent. But then the Brown brothers show up, and it’s clear that Alicia Brown’s father, Lionel, shot Isaiah in the back. Claire calls him on it. He doesn’t like a woman chastising him, so he strikes out, knocking Claire’s injection device (for the penicillin) from her hand. She is crushed (as is the device).

In the woods, Jamie faces off with a Regulator who raises his rifle, a clear shot, but Murtagh is there to save Jamie—one last time. In that instant of joy and reconnection, however, a militiaman shoots Murtagh in the chest. YES! He shoots Murtagh. Is he dead? He can’t be, that’s what I think until there’s no doubt. Jamie doesn’t believe, either, he yells, “Help me!” He has one thought—take Murtagh to Claire. She will save him. He carries him, and Claire is the only one he will believe—and when she says Murtagh is gone, she must say it more than once for Jamie to believe his godfather is gone.

It seems that Jamie may have released Murtagh from his oath, but Murtagh would never accept such a thing. He dies having done what he promised to do, years ago—always be there for Jamie Fraser.

As the reality of Murtagh’s death sinks in, Jamie ventures from the tent where her godfather’s body lies and immediately must face a gloating Tyron. Rage and grief overcome Jamie, but he still manages to restrain himself, but he does give Tyron what-for. However, he doesn’t strike the soon-to-be governor, thank goodness (which I might’ve done).

Then alone by a fire, Jamie’s grief is devastating.

Later, he sees Brianna, who is worried: She has not found Roger. The family searches for him until they find three hanged men, dangling from a tree trunk, with a thickly knotted rope around their necks. There are hoods over their heads, so their faces aren’t visible. But one is wearing Roger’s clothing.

As a horrified Brianna and Claire look on, the body is lowered, and Jamie reaches for the hood. The women watch, anxiously, and the episode ends.

Next week’s episode is Famous Last Words. After this episode, all I need is to know is Roger dead! Gah! He’d better not be…

Denny S. Bryce is an award-winning author and three-time RWA Golden Heart® finalist, including twice for WILD WOMEN AND THE BLUES, her debut historical fiction novel coming on March 30, 2021. @dennysbryce
All Posts
PrevPreviousLove YA: Top 3 Y.A. Reads for the Week of March 31st
NextFive Hilarious Tweets about Tiger King on NetflixNext