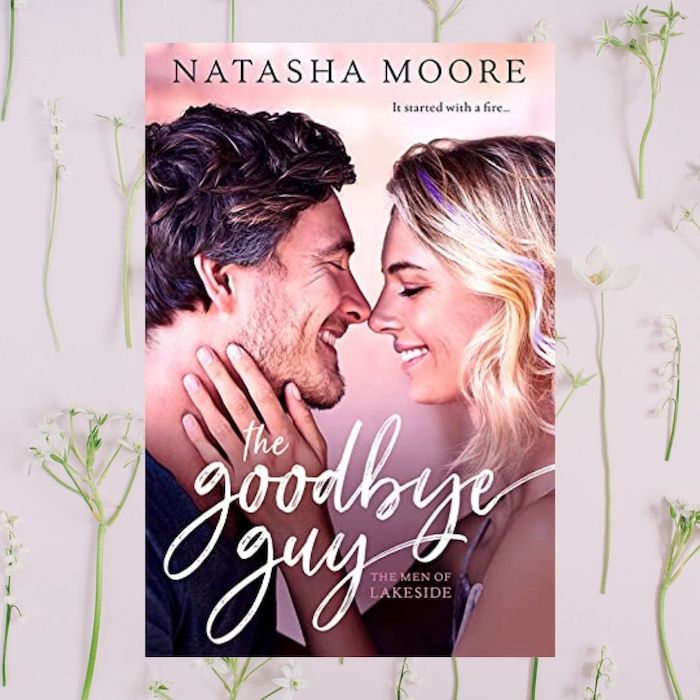 Natasha Moore is one of my favorite seasoned romance authors; she’s an auto-buy for me. I’ve enjoyed her Men of Lakeside series for a while now. Lakeside is a small town, aptly named as it sits on a tourist destination lake. The men are three brothers who operate their parent’s salvage shop while attempting to get on with their lives and other careers. The first book, The July Guy, tells the oldest brother, Noah Colburn’s story. He’s a divorced dad, running for mayor that’s hired to renovate a house newcomer Anita inherited from her recently deceased grandmother. The Standby Guy is middle brother, Carter’s story. When he’s not working for his parents, he’s the town’s attorney. He gets his HEA with his widowed neighbor after her son flies the nest and heads off to college. The third book, The Goodbye Guy, is the youngest brother Beckett’s story and whoa Nelly does he have some issues to work through!

If every member of a family has a role, Beckett’s is the screw-up; at least that how he sees himself. It’s not a difficult leap for him to make. His older brothers are well-established pillars of the community, and Beckett skedaddled after high school, kept his distance for about twenty years, and then showed back up with no job, a bunch of tattoos, and a screaming newborn baby girl. Surprise! Growing up as the youngest in the well respected, much loved, and decidedly blue-collar Colburn family, Beckett knew there had to be more in the world than just living in Lakeside under the considerable shadow of his older brothers. A chance encounter with the town’s rich girl princess and some words said out of hurt sent him his way as soon as he could graduate and go. He traveled the country, learned how to bartend, ended up running a bar, and gave his heart to the wrong girl. She was going to leave him high and dry after their child was born, but fate stepped in and took her before their daughter could even meet her. When Beckett returned to Lakeside and had to ask his family for help raising his daughter, it was the hardest thing he’d ever done.

Rachel Bradford grew up on the other side of the tracks. She was the rich girl princess who was also the screw up in her wealthy family. Unlike Beckett’s, her family had no trouble telling her much she disappointed them daily. Rachel didn’t want to work for the family business. She wanted to be an interior designer, so she high-tailed it out of Lakeside as soon as possible. The chance encounter with Beckett just before graduation had her running at lightning speed, and she never looked back. To say they were mortal enemies would be an understatement. Rachel left and made her own way by becoming a star on a home improvement tv channel remodeling and flipping homes. With her ratings slipping, her producers send her home with hopes of her return, stirring up some gossip (read: media attention) as only a small town can do. Rachel is hired to renovate the old fire station in town. The old fire station is the sight of her embarrassing encounter to never be spoken of with Beckett Colburn. It’s also the location of Beckett’s new bar – what could possibly go wrong?

Full of trope-y goodness, this enemies to lovers, second chance, fake relationship, single dad, rival families, small-town romance gets the full Hollywood treatment with probing interviews and cameras all up in everyone’s business. One of the things I love about Moore’s storytelling is how she doesn’t hold back on the romance and heat department just because her characters are a little older. She writes the passion and chemistry in a way that will make you blush just a little bit. It’s a gentle reminder that it’s never too late to fall in love, and passion is always there, regardless of age. Rachel and Beckett are the youngest couple in this series, clocking in in their late 30s, which for me, a fifty-year-old rings a bit young! Sadly, couples in that age range are literally and figuratively shelved in romancelandia – just when we have finally learned what we want out of life, and in the bedroom and most importantly, we aren’t afraid to demand it. Much to many young people’s chagrin, things really do get better with age…you can thank me for this insight later!

Each book in the Men of Lakeside series can be read as a stand-alone, but I highly recommend all three. They are incredibly entertaining, and Moore deftly tackles some issues that will make you scratch your head and question your thinking. Her heroines are extraordinary.  Moore explores Anita’s desire to only have a no-strings sexual fling once a year, Katie getting back into the dating game after almost a decade of being “just a mom,” and Rachel’s decision to focus on her career instead of marriage and kids. Rachel is more than happy with her career choices, and even though people struggle to understand her decisions, she is equally satisfied being childless. Moore unapologetically goes there with her heroines, and we are all the better for it. With Moore’s books, you go in for the flawed, deeply layered characters with all of their growth and development, and you stay for the wicked hot sex – it’s a win/win!

Donna Soluri started in the book world as Scandalicious; now, this almost empty nester is going her own way. A lover of cupcakes, champagne, old-school rap, and Harry Styles she likes to read books with characters closer to her age still romancing and kissing and causing trouble.
All Posts
PrevPreviousJune Must-Read Romantic Suspense
NextThe Alice in Wonderland Retelling You NEEDNext