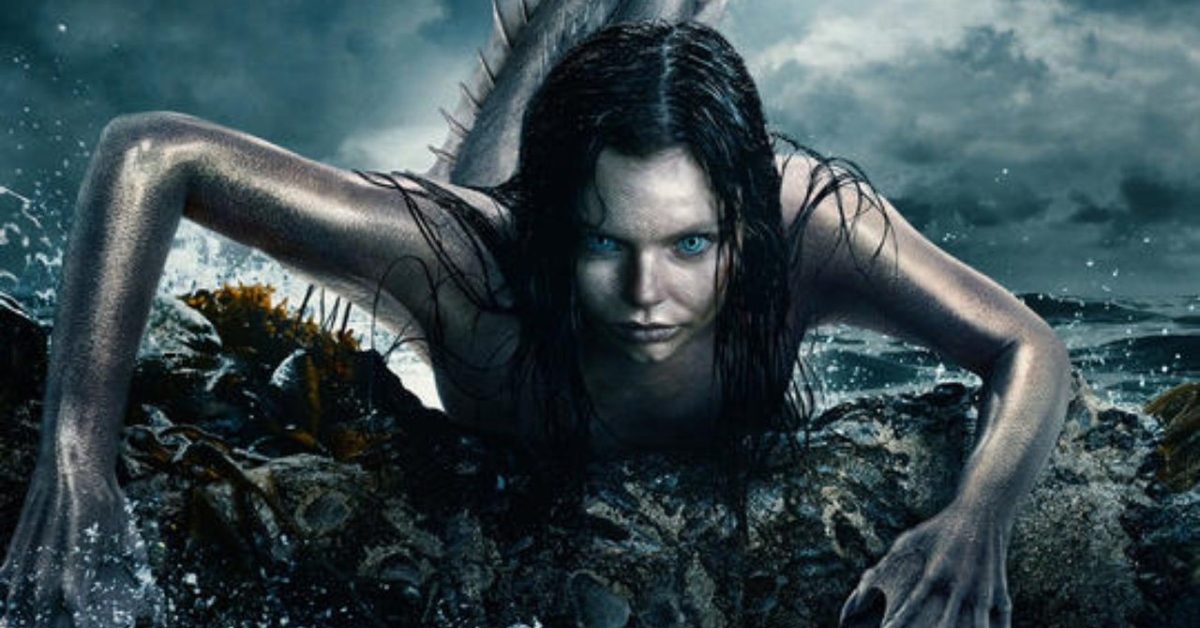 I know what you’re thinking. “Queer polyamorous killer mermaid show?! What are you talking about? Why haven’t I heard of this?” Siren, which debuted in March 2018 on Freeform, is a swimmingly subversive series making a quiet splash—with a helluva romantic ripple effect. Starring Eline Powell as the titular siren and Alex Roe and Fola Evans-Akingbola as the marine biologists who take her in, Siren is a both delightful and dark drama about nature conservation, found families, and what it means to care about each other.

When I started watching Siren in April of last year, I was immediately struck by the diversity and the queerness of it…and how it’s all just a matter of course in this small Pacific Northwest town. What helps the dynamic along is how Ryn and her fellow merpeople have no concept of human sexuality, of social filters, of what’s considered strange or boundary-crossing. Ryn arrives on land looking for her missing sister, is drawn to Ben and Maddie, and doesn’t even bother questioning it. While Roe’s Ben is initially like the archetypal sailor wooed by the siren’s song, Ryn’s relationship with Maddie springs up more organically, out of trust. Powell and Evans-Akingbola’s chemistry is soft and warm—and that’s something that makes all kinds of sense when viewers later learn that mermaids are a matriarchal, female-dominant, society. As Ryn learns to interact with the human world and picks up on English, one of her observations to Maddie is that “You are love.” It soon becomes apparent that there’s more love to be had.

What’s important, though, is that the show makes sure Ryn has agency. The “little mermaid” is actually a ruthless predator, older than she seems. As Siren progresses, you realize she’s very much the alpha. She may look delicate and child-like, but she decides Ben and Maddie are her people, part of her colony, and that’s that. She chooses to climb into bed between them when they’ve stashed her on their couch in the third episode. “I am FLAILING. Are y’all seriously giving me a f/f/m trio on Freeform?” I tweeted after that scene. At the time, I couldn’t have imagined that the answer was a resounding YES, but Siren quickly proved they were following through. A curious Ryn kisses Maddie in the fifth episode. Then, one episode later, when Ben kisses Maddie and says “love you!” Ryn automatically kisses Ben and repeats “love you!” Bemused, Ben and Maddie assume she’s copying the behavior they’re modeling…but what’s actually happening is that Ryn is working out for herself what this “love” thing is.

“Ben is love,” she eventually declares. “Maddie is love, too.” As the series flits through its second season, they’ve continued to deep-dive into what exactly that means. And introducing more merfolks has only helped expand the conversation. For instance, when a handsome merman—newly dubbed Levi—kisses Ben, Ben doesn’t have some sort of gross homophobic crisis. He instead assures Levi that there’s nothing wrong with men kissing, but “You don’t kiss a person unless they want to be kissed.” That Valentine’s Day 2019 episode covers consent and desire across multiple levels, from how mermaid sex and human sex differ to how important it is to voice what you want—and it ends on the loveliest note: Maddie, Ryn, and Ben all on the same page, kissing each other.

But ongoing consent isn’t ignored. In the following episode, the trio wakes up together and Ryn wonders why they didn’t go any further than kissing. Maddie explains that she and Ben weren’t certain if Ryn was ready for more. “Yes. Ryn wants more,” she assures emphatically. The assertion leads to another discussion of mermaid mating versus humans having sex or making love—complete with Ryn informing Ben and Maddie that “sometimes males die from too much mating.” (I’m pretty sure Ben’s willing to risk it!) Later on, Ryn tells Maddie’s mom, of all people, exactly what she wants out of this budding relationship. “I would like to make love with Ben and Maddie,” she says. Mom (The Jamie Foxx Show’s Garcelle Beauvais) stammers out a bewildered “Okaaaaay.” It’s more than okay. It’s pretty fantastic, in fact.

To have a basic cable series tease a polyamorous triad from the beginning and slow-burn it right into a second-season payoff is practically unheard of! And to have it play out on a show that’s also racially diverse…? Don’t pinch me, I don’t want to wake up from this dream. Here’s hoping that Siren will keep the dream alive all the way through this season and into a third! Because what could be more appropriate than that?