Supernatural Episodes That Won’t Make You Cry, But Laugh! 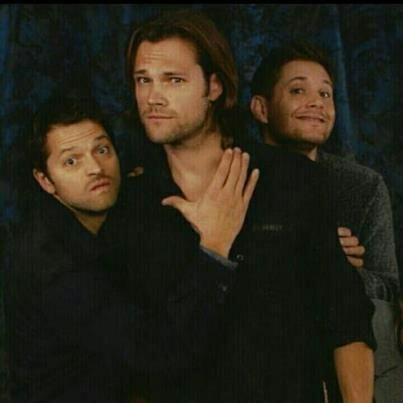 Supernatural is on hiatus for another few months for fans, but the cast and crew have already returned to work in Vancouver to film the final season. The actors were all emotional about the show ending at their annual visit to San Diego Comic Con last month, especially because they (and we) all knew it would be their last appearance in the cavernous Hall H. Jared Padalecki, Jensen Ackles and Misha Collins all needed to reach for the tissues (metaphorically at least, and literally in a few cases) as they talked about what playing Sam and Dean and Castiel has meant to them. As I sat in the audience, I felt the same, as did most of the gathered fans. Later, I joked with Jensen Ackles that he was going to try to hang onto his denial for at least the first part of the season and make it “work as usual” as much as he could. In the spirit of denial, this month’s Supernatural article will be all smiles and no sadness: my favorite feel-good Supernatural episodes.

Well, actually, there aren’t any Supernatural episodes that are entirely feel good episodes. Supernatural is known for mixing up the humor and the horror and the tug-on-your-heartstrings, but some episodes – or at least parts of episodes – really do just make me laugh out loud. And I’m grateful! So here are the episodes and the moments that never fail to make me smile.

Season 6 was shaky in some ways as Eric Kripke left and Sera Gamble took over, but my favorite make-me-laugh episode happened this season. Jared, Jensen and Misha romp through the episode clearly having a blast as making fun of “Jared, Jensen and Misha” and their enjoyment is infectious. For anyone who’s been watching the Show a long time, the inside jokes just make it more hilarious. I can’t watch the “bad acting” scene without doubling over with laughter, from Jensen’s exaggerated Dean growl to Jared’s staring at the ceiling babbling about “if there’s a lock there must be a key” to Misha’s dismissive shove of the make-up crewperson right out of the shot, the entire scene is priceless. And the exasperation of fake Bob Singer (director) and fake Serge Ladouceur (director of photography) and the rest of the crew as they try to get something usable is the icing on the cake. If I’m ever having a bad day, The French Mistake is my go-to in order to feel better.

Season 10 has a few of my favorite episodes, and this is one of them. Out of all the writers who have come and gone on the Show, Robbie Thompson remains the writer who made the show that I want to see. Fan Fiction is a perfect example of why. It has some truly funny moments, especially as the actual monster tries to kill Sam and Dean in the middle of an ongoing school play, but mostly the whole episode just makes me smile. It was the milestone 200th episode and it’s truly a love letter to the fandom. There’s acknowledgement of all the things that make fandom special but are often not validated or appreciated (and in fact are more often criticized) – transformative works, fanfiction, shipping, fannish creativity. It’s all there, and Dean and Sam’s journey is one of acceptance and understanding. I’m smiling just thinking about it – and missing Thompson.

In Season 13, Supernatural did its first crossover. The cast was ecstatic that it was with one of their favorite cartoons, Scooby Doo. It’s a feel good episode, made even more smile-inducing because we got to see lots of behind the scenes of the making of the episode, and Jensen, Jared and Misha having the time of their lives voicing their cartoon characters. It also has a sweet message and a mostly happy ending, and it pings both my nostalgia yearning and my love of Supernatural simultaneously. This episode also brought new writer Jeremy Adams into the fold, and I’m excited to see what he comes up with for Season 15! 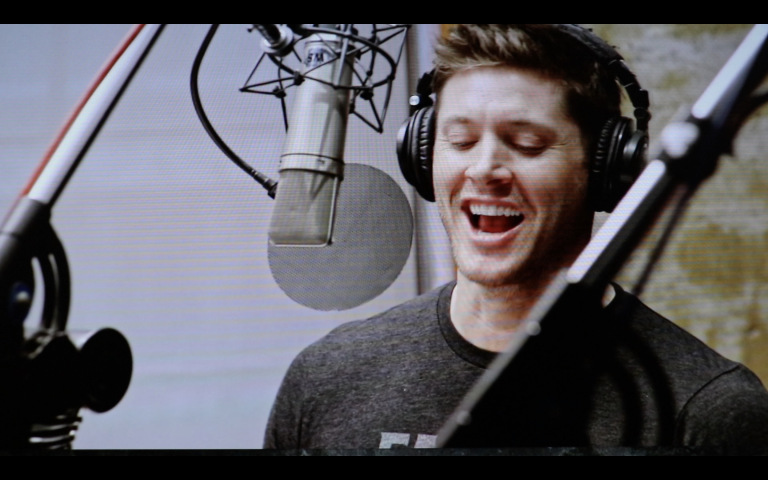 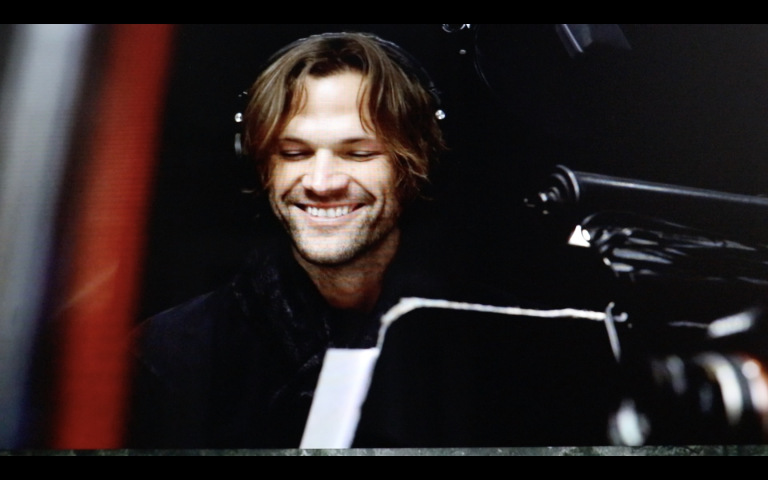 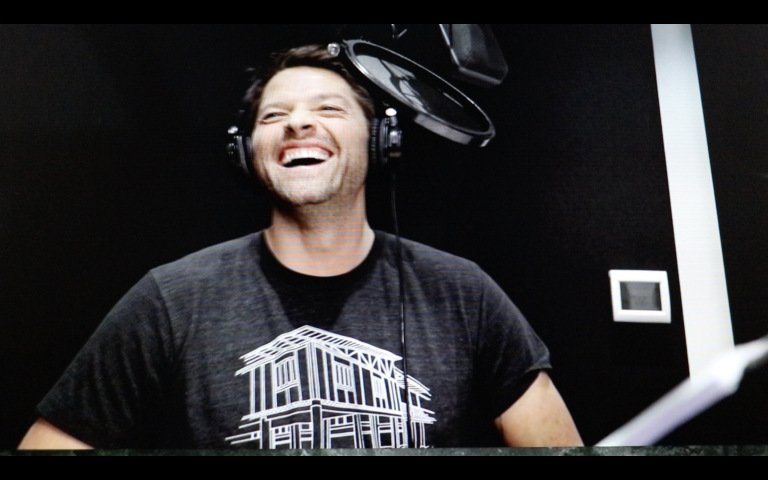 Season 5 has lots of my favorite episodes, and this is one of them. Kripke was still in the driver’s seat, and his unique ability to both make fun of and simultaneously validate fandom allowed the show to go meta without losing viewers. In this episode, representative fangirl Becky lures Sam and Dean to a Supernatural convention, where all sorts of amusing moments ensue as the Winchesters are confronted with fans cosplaying both the monsters they’ve confronted and the brothers themselves! Emily Perkins was perfect as Becky, and Rob Benedict gave us a lovable Chuck (long before he became the big bad of the final season). Their romance was the creator loving the fans and vice versa, and once again there’s an evolution in Dean’s understanding – of both fans and of the Winchesters’ lives. It’s a brilliant episode, and I’m always smiling as it ends. 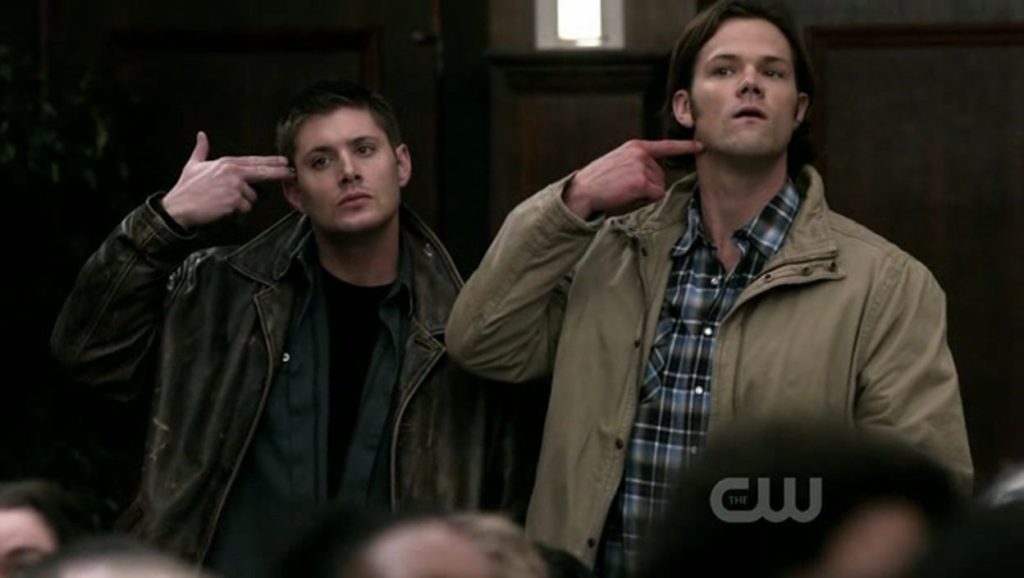 Another Season 5 classic, this one by the brilliant Ben Edlund. The episode has an underlying disturbing theme, but on the surface the Winchesters being thrust into TV Land by the Trickster is played for laughs. The parodies of Grey’s Anatomy and CSI are on point, right down to the “Doctor…Doctor…” and sunglasses in the daytime, and Sam and Dean forced into a game of “Nutcracker” is funny even as I cringe for poor Sam losing his round. My favorite moment, though, is Dean fanboying over Dr. Sexy MD and losing his shit when the Doc comes over to speak to him. Who doesn’t know exactly what that feels like? (Often when confronted with Ackles himself up close and personal).

Those are my five favorite feel-good (or at least make-you-laugh) episodes, but there are moments in some other episodes that always get to me in a good way too.

Bad Day at Black Rock in Season 3 was one of the first episodes to really show what Ackles and Padalecki could do with comedy – Dean’s “I’m Batman” and Sam’s plaintive “I lost my shoe” make me lose it every time, and the entire scene where Sam is supposed to stay sitting still on a chair in the middle of a hotel room but the heater sets the drapes on fire and he eventually knocks himself out? OMG hilarious. 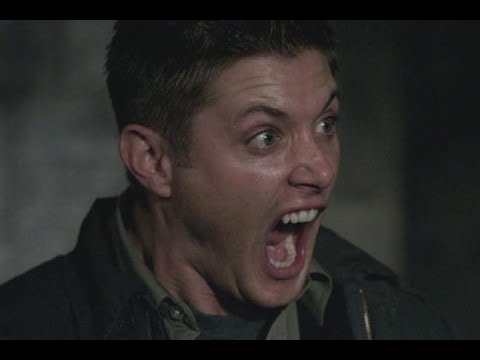 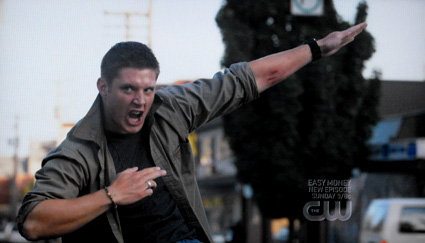 The brothers’ ongoing prank war in Season 2’s Tall Tales makes for some amusing moments, including Dean and Sam each recounting the events of the night before from their perspective (and making their brother look bad). “I’ve had enough of your blah blah blah blah” is a classic line. And the brothers ending up wrestling on the bed trying to grab the wallet is made even funnier by the many gifs online and the ridiculous faces they’re both making.

Season 2 also had Simon Said, which includes Dean being mind controlled by Andy. The scene in which Andy asks what they’re doing there and Dean starts telling him the truth, and an incredulous Sam tells him to shut up is priceless. Dean: I’m trying.  Ackles, Padalecki and guest star Gabe Tigerman all bring their comedic chops to that episode.

The opening scenes of Season 6’s Frontierland are also fun to rewatch. Dean’s childlike enthusiasm for going back to the “old West” juxtaposed with Sam’s barely contained cynicism (and reluctant affection for his grinning brother) is sweet and funny, and Dean’s gradual realization that the reality isn’t very cool at all is well played by Ackles with humor. Also, Sam riding that little horse…

Similarly, while Dog Dean Afternoon isn’t one of my favorite episodes, Ackles and Padalecki’s gifts for comedy make the scenes where Dean becomes a dog (sorta) hysterically funny. Sam’s gradual realization that Dean is playing “fetch” with him, Dean’s denial as he scratches behind his ear and barks at the mailman and hangs his head happily out the car window as Sam drives – perfectly executed.

I also have to include one episode from last season that actually made me smile. Most of that season was not smile-inducing at all, but Mint Condition is a favorite. Dean’s fanboy side was given free rein in this episode, and I loved every minute of it. His fight with the monster of the week, including a smack with a metal tray and some witty dialogue, was a pleasure to watch. Also? Dean in glasses and button down. Mmm.

So if you find yourself feeling down about Supernatural coming to an end, cue up Netflix or grab one of your old DVD’s and revisit some of the Show’s feel good moments. We all need something to make us smile as we count down the show’s final 20 episodes!

Lynn Zubernis PhD is a psychologist and university professor who has published many books about fandom and fan psychology and why it’s healthy and positive and just plain fun to be passionate about the things we love. Her most recent books, There’ll Be Peace When You Are Done: Actors and Fans Celebrate the Legacy of Supernatural, and Family Don’t End With Blood: Cast and Fans on How Supernatural Changed Lives, have powerful chapters contributed by the actors and the fans of Supernatural, the show she’s passionate about. You can also go behind the scenes of that show and explore the ins and outs (so to speak) of fanfiction and fandom in her book Fangasm Supernatural Fangirls.
All Posts
PrevPreviousNew Adult Corner: Top Picks for August
NextExclusive: Secret Admirer by Harlow Layne ExcerptNext